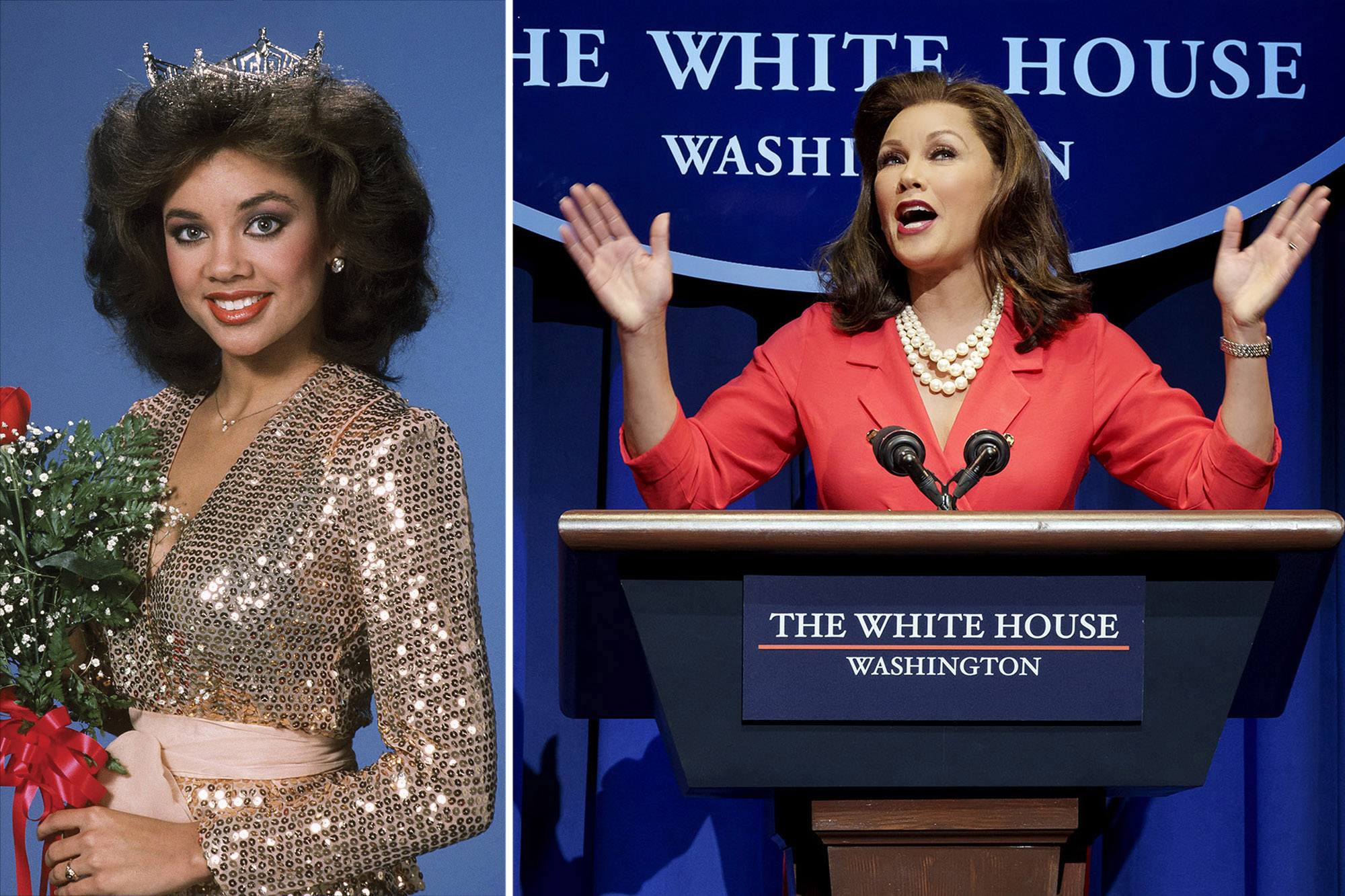 She went from being crowned Miss America — to being elected First Lady.

Vanessa Williams stars as the First Lady in Broadway’s “POTUS” —a role she’s been gathering material for her entire life.

“I’ve met five first ladies in my lifetime, which has been pretty extraordinary, so I’ve got some great history to pull from,” the 59-year-old told The Post via Zoom on Friday. “Because they’re all amazing, graceful, smart, passionate, dedicated women.”

Her first encounter with the president’s other half came after getting crowned Miss America in 1983 —when she attended the state dinner at the White House and met President Ronald Reagan and his wife, Nancy.

In the play, which has been nominated for three Tony Awards, audiences never see the president, but learn a salacious fact about him —that he got a young woman, played by Julianne Hough, pregnant.

Williams was crowned Miss America in 1983.NBC via Getty Images

The actress and “Save the Best for Last” singer —who invited her Chappaqua neighbor Hillary Clinton to see the show —shrugged off any hint of irony.

“But you know what … there’s been lots of scandals, John F. Kennedy, I mean, there’s been scandal across the board,” she said.

One of the most recent scandals to rock the Great White Way is the leak of a cell phone video and images of a nude Jessie Williams in “Take Me Out.” The mom of four and first-time grandmother says that’s par for the course and “part of the risk of doing a show where you’re full frontal and full rear.”

The former pageant queen understands the risks firsthand, having had naked photos of herself emerge after winning Miss America, which led her to ultimately resign.

In fact, she first got the news that her “Penthouse” photos went public without her permission from a New York Post reporter during an interview in 1984 —which was also about a woman in the White House.

“Geraldine Ferraro was running as the ticket for female vice president … It was July 13th, Friday the 13th, when I had the interview … At the very end, he said, ‘Oh, by the way, we heard from a reliable source. And I was like, ‘I have no idea what you’re talking about.’”

Williams on stage in “POTUS.”Paul Kolnik

Williams —who won Miss America while she was still a student at Syracuse University —said she didn’t experience the same pressures as other beauty competitors had.

This was because the Bronx native, who grew up in Millwood, was awarded the title after participating in only a handful of contests, including Miss New York, a title she was awarded just a few months prior to Miss America.

She met Miss Universe winner Chelsie Kryst, who committed suicide in January by jumping off her Midtown building, when the Extra correspondent interviewed her virtually in 2020.

“I did one interview with her during the pandemic,” she said. “But I had no idea. She did not look like she had any mental issues that she was dealing with at all. So I have no idea what was going on in her life, but to take your life in that manner, it’s a very strong declaration of wanting to be seen and heard.”

For her character, Margaret, who Williams calls a “badass,” the actress does her own makeup. And as for accessories, she took inspiration from real-life White House women.

“I’ve met five first ladies in my lifetime, which has been pretty extraordinary, so I’ve got some great history to pull from,” Williams said.Paul Kolnik

“The triple strand of pearls is definitely very Barbara Bush,” she said. “The headband that I wear in Act II, Hillary went through her headband phase. The jumpsuit, I think Michelle Obama is probably the only First Lady that’s ever done a jumpsuit.”

And speaking about signature accessories, Williams still has her Miss America crown in a box at home. “I resigned, no one came to my house to dethrone me,” she said, laughing.