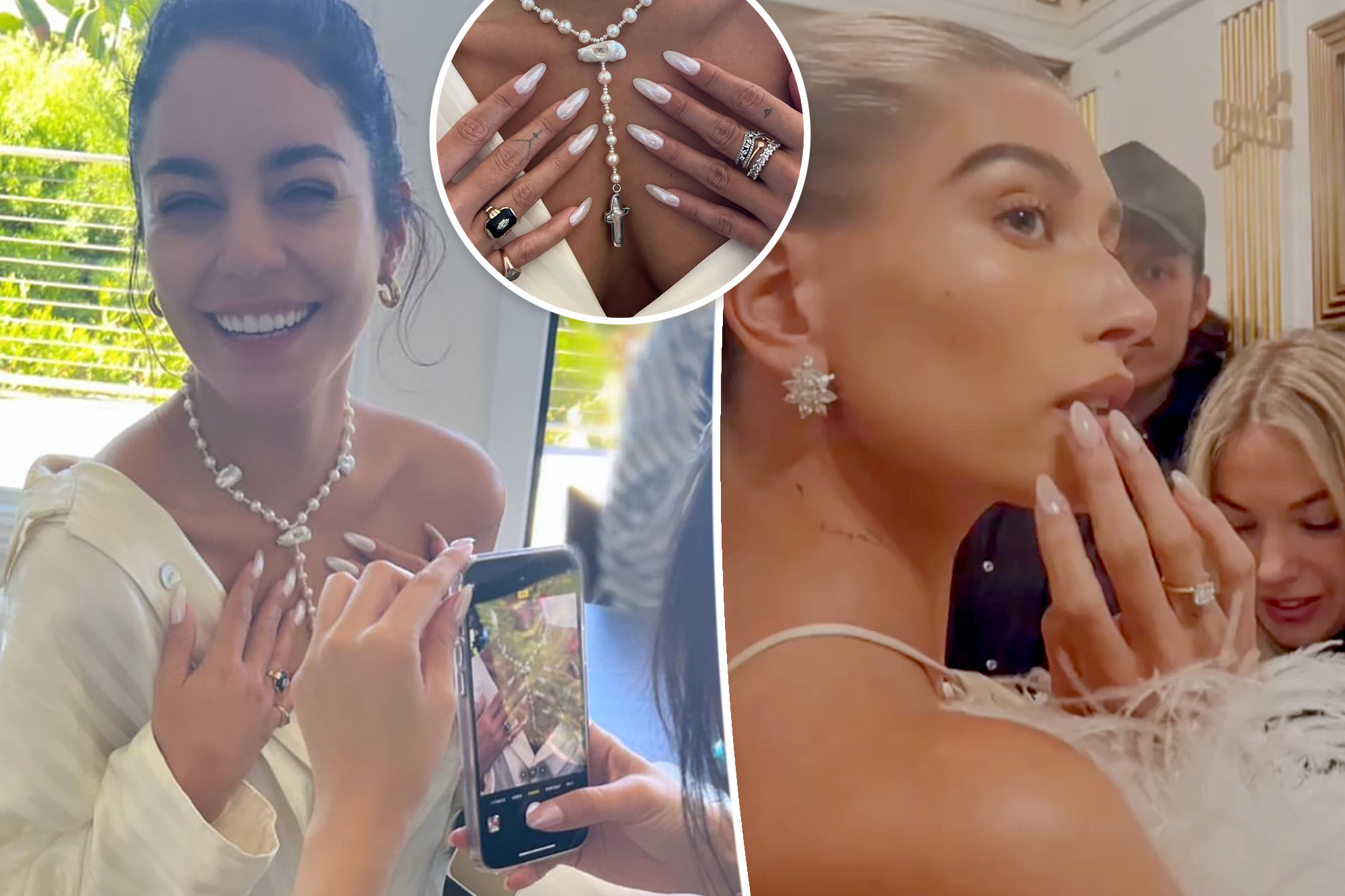 “Glazed donut” nails are officially the it-girl manicure of summer 2022.

When Hailey Bieber debuted her shimmering sheer mani at the 2022 Met Gala, fans went wild in their effort to recreate the neutral nails.

Now, Vanessa Hudgens is showing off her own version of the look, courtesy of the same talented nail artist.

Los Angeles-based nail artist to the stars Zolzaya Ganzorigt originated the much-duplicated design, and revealed the exact products she used for the look on her Instagram shortly after the event.

Beauty gurus have been trying to emulate the nails ever since, with more than 7.4 billion views on TikTok devoted to the now-viral trend.

While Bieber’s mani was more baby pink, Hudgens went for opaque white — using fan-favorite OPI Funny Bunny and OPI Chrome effects in Tin Man Can — that truly will go with anything.

Hudgens, 33, commented that she was “obsessed” with the neon version of Bieber’s glazed nails on Ganzorigt’s Instagram just one day before she shared photos of the completed white look on her Instagram stories. She captioned the pics, “When ya nails match ya pearls,” and Zola shared behind-the-scenes snaps of her own.

Nail artist to the stars Zola explained exactly how to ask for your own version on Instagram. nailsbyzola/Instagram

Ganzorigt, who goes by Zola, told Page Six Style, “Hailey and Vanessa’s nail were same but different,” because “for Hailey’s, it was translucent and I only used one coat of the color, but on Vanessa I used exact same color but two coats, so it gave it more pearly look.”

Zola said that interested parties “can ask for a pearlescent chrome nail,” if they want to recreate the look on their own. “If they don’t have exact nail polish I used, just choose a milky off-white color or mix regular white with clear gel,” she advised.

After Hailey Bieber showed off baby pink shimmering nails at the Met Gala, all of TikTok tried to recreate the summertime trend. nailsbyzola/Instagram

When it comes to the chrome, she recommends using Tin Man, but if the salon doesn’t have it she says “pearlescent chrome powder without any shade effect” should do the trick, because chrome powders tend to have “reflecting shade colors in the powder, such as pink, purple and green.”

Zola told us she was “really surprised” the trend took off post-Met Gala. Before the event, she found the chrome powder while shopping and decided to use it at the last minute after seeing Bieber’s white satin Saint Laurent dress.

“We were originally just doing translucent white, but after I put on the color, I asked Hailey to try the chrome effect because it would match her dress. That’s how we discovered glazed donut nail,” she revealed, adding, “One thing about Hailey is she always knows what she likes and wants and at the same time is always open to explore new things. If you ask any nail artist, that’s our ideal, dream client.”

Zola thinks the custom color has taken off because it’s subtle with a “fun twist,” and is “really simple but catches everyone’s eye.” She “always tells people it looks way better in person and once you get it, you’ll get addicted to it.”

The model and wife of Justin Bieber famously loves a glazed donut effect whether it’s on her nails or face, offering a Peptide Glazing Fluid ($29) as part of her skincare line Rhode’s first product launch.

Say goodbye to extravagant nail art and the return of the French, because chrome appears to be here to stay; This summer, you won’t just be glazed with perspiration — now, your nails can be shiny too.

‘RHODubai’ star will ‘never forget’ when Beyoncé wore her design
Denise Richards celebrates Fourth of July in flag bikini
We use cookies on our website to give you the most relevant experience by remembering your preferences and repeat visits. By clicking “Accept All”, you consent to the use of ALL the cookies. However, you may visit "Cookie Settings" to provide a controlled consent.
Cookie SettingsAccept All
Manage consent