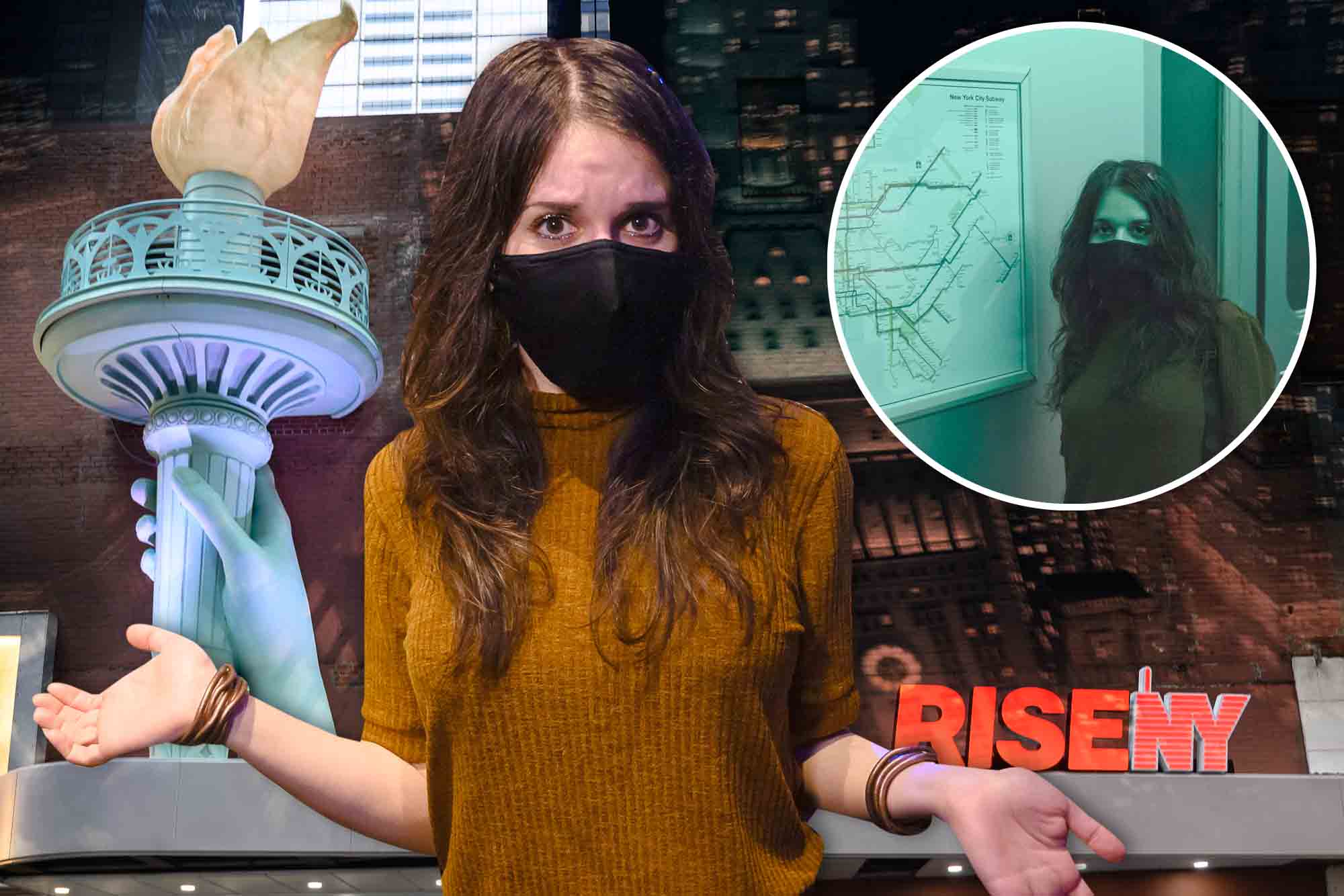 Manhattan has hosted more than its fair share of Instagram museums. But the new immersive experience, RiseNY — an assortment of random cultural artifacts paired with a theme-park ride, and shoehorned into an otherwise drab Midtown storefront — might be the most absurd yet.

Now in previews in Times Square, this $28-per-person tourist trap offers audiences a “three-part journey” through the five boroughs’ history that will purportedly “help the city soar to new heights” as it “rebound[s] from the pandemic in an extraordinary way,” as the press materials for the exhibit say.

In reality, it is a charmless, New York-themed highlight reel of pop art spread across three windowless floors.

At the 45th Street exhibit, attendees are immediately greeted with a RiseNY step and repeat before heading upstairs to an imitation City Hall subway entrance, now with wall-to-wall carpeting.

Inside, the station re-creation is actually a theater built to screen an “immersive film” by documentary filmmaker Ric Burns. In it, narrator Jeff Goldblum gives NYC’s entire history the SparkNotes treatment, from its Native American beginnings to the “astonishing tide of newcomers” who brought the city back from the depths of the 1990s’ crime surge to the present.

When Goldblum described Times Square as the city’s “beating heart,” I nearly cried.

Suddenly, a subway car is projected pulling up along the sidewall of the theater. But wait — it’s real! The wall opens up and the audience is ushered inside. This might have been a cool effect, if I hadn’t just taken the actual subway to get to the exhibit.

The labyrinth is accompanied by several frantic audio streams, comprised of pop songs and celebrity interviews, playing so fast through the speakers that they nearly overlap.

The TV/Radio gallery included a wall of old radios, printed panels about TV shows including “Seinfeld” and “Mad Men,” the couch from “Friends” and a late-night talk show set. The Music gallery had framed Bob Dylan lyrics, a picture of Bruce Springsteen and a rap-themed area replete with a turntable, record stacks and original graffiti murals that say things like “hip hop.”

After the galleries comes the main event, a 15-minute “experience” that starts with staff informing guests the year is 1957 before guiding them into a screen-lined room built to feel like an elevator, which promptly simulates crashing. (This is by far the exhibit’s most bizarre moment.) The fake elevator then opens to a room with another wall of screens playing a prolonged black-and-white vintage New Year’s broadcast, commercials included. At one point, the screen abruptly turns into a camera, projecting the masked audience back at itself, staring up, emotionless.

Then, finally, the ride.

“I was inspired after riding ‘Soarin’ Over California’ in Disneyland with my son, and always thought, ‘Wouldn’t it be amazing to fly over and around NYC?’ ” James Sanna, CEO of RiseNY’s producer Running Subway, explained in a press release.

After being strapped into one of the flight simulator’s 46 seats, I was hauled 30 feet into the air and, for five surprisingly enjoyable minutes, got to feel like a sentient drone — gliding high above the Verrazzano, swooping through Dumbo’s more iconic streets and over Central Park as various sensory effects evoked the feeling of a light water spritz and air turbulence.

Then it’s over, and guests exit through the gift shop and back into Times Square.

“It was awesome,” Fernanda Zambrano told The Post upon leaving RiseNY. A Chilean tourist in town for less than a week on her second ever visit to NYC, she admitted the gallery bit was “not that exciting,” but the ride itself made the ticket price worth it.

Online, RiseNY’s accounts are full of influencers’ glowing reviews at the highly Instagrammable experience, which makes sense: This is a show built to feed the feed, not the soul.

Still, RiseNY stands out in NYC’s long history of made-for-social-media attractions as perhaps the most over-ambitious, self-serious attempt to reduce the boroughs into an Epcot pavilion. And while other thinly disguised photo ops have tempted tourists with giant ice cream-themed props or other cartoonishly colorful sets, RiseNY offers a weird repackaged corporate summary of the real New York City — which, attendees should be reminded, is right outside.

The reporter and Oscar the Grouch pose with the “Friends” couch.
Stefano Giovannini

A fake subway car with a fake tree in it serves as a transitional space from the “immersive” film into the gallery portion of the exhibit.
Stefano Giovannini

Cringe-worthy ‘Jewish’ recipe by Whoopi Goldberg resurfaces
Tiny Harris’ Daughter, Heiress Harris’ Cooking Lessons Will Make Your Day
We use cookies on our website to give you the most relevant experience by remembering your preferences and repeat visits. By clicking “Accept All”, you consent to the use of ALL the cookies. However, you may visit "Cookie Settings" to provide a controlled consent.
Cookie SettingsAccept All
Manage consent