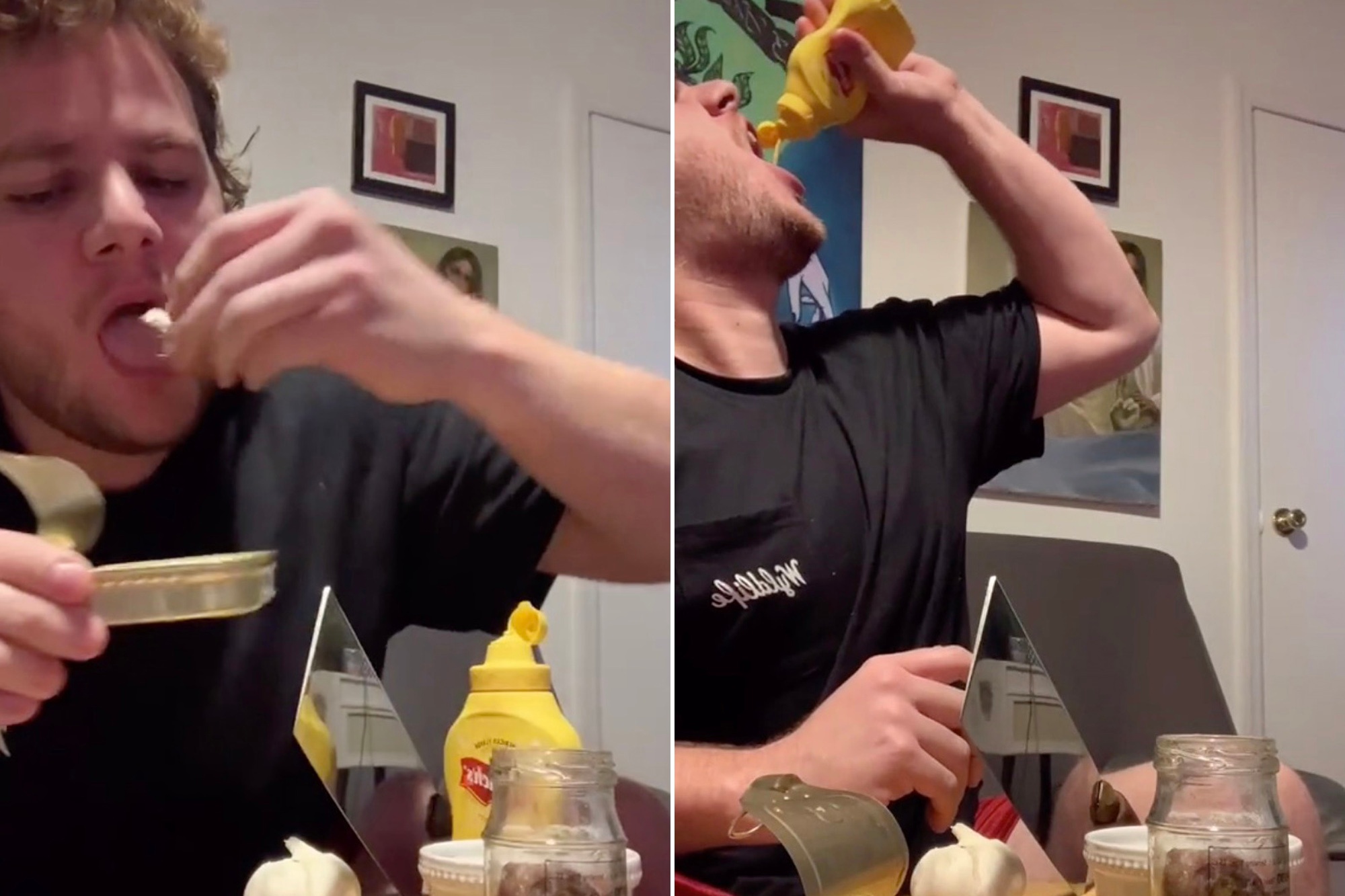 He would’ve killed it on “Fear Factor.”
A New Jersey TikTok creator has devised a gag-worthy way to demonstrate how the coronavirus affected his taste buds — by filming himself eating a medley of odiferous foods.
“I am currently COVID positive and I can’t taste anything,” explains Russell Donnelly, 30, in the most viral vid of the challenge, which grossed over 17 million views. Donnelly said his fans wanted him to try “nasty stuff,” but as he didn’t have any around the house, he opted to “eat some stuff that would be strong or pungent.”
In the ensuing footage, compiled by Storyful, the intrepid epicure can be seen consuming a chunk of onion, a shot of lemon juice and garlic paste, and more in quick succession with seemingly no adverse affects.
Follow-up vids show Donnelly trying Gerber baby food, a whole lemon, anchovies with capers, mustard, apple cider vinegar, wasabi Oreos and other funky foods. His reaction to all of it: “Nothing.”
Donnelly tries anchovies and capers to demonstrate his COVID-19 symptoms.TikTokNeedless to say, his no-taste test is eliciting shock and awe from viewers across TikTok.
“You may not taste it but you’ll feel it tomorrow,” observed one about the “Jackass”-esque stunt.
“This man gonna accidentally find the cure,” quipped another.
Some dared him to try other strong noshes like cat food and the ghost pepper, one of the spiciest chillies in the world.
However, Donnelly wasn’t inhaling odd foods just for internet clout. He told Storyful he wanted to prove to his skeptical friends that COVID did indeed affect his sense of taste. In fact, it was an inexplicable bout of ageusia — the lack of taste function on the tongue — that prompted him to get tested in the first place.
He received his diagnosis on Nov. 5 and immediately quarantined himself at his Jersey City home. He said he was “a little scared” at first but “mostly nervous for those I had been in close contact with and their families.”
Donnelly began filming his gastronomic experiments on Nov. 8 and continued over the course of a week. He told Storyful that he began shooting the videos because he lost his senses of taste and smell, but it had now “become a lifestyle and I reckon I’ll continue to do it when my senses return!”
Donnelly isn’t the first to report having senses sapped by the coronavirus. Hollywood icon Tom Hanks said his wife, Rita Wilson experienced similar symptoms during the couple’s much-publicized bout with the illness.
And taste tests like Donnelly’s became all the rage among college students, who naturally turned the symptom into a drinking game.