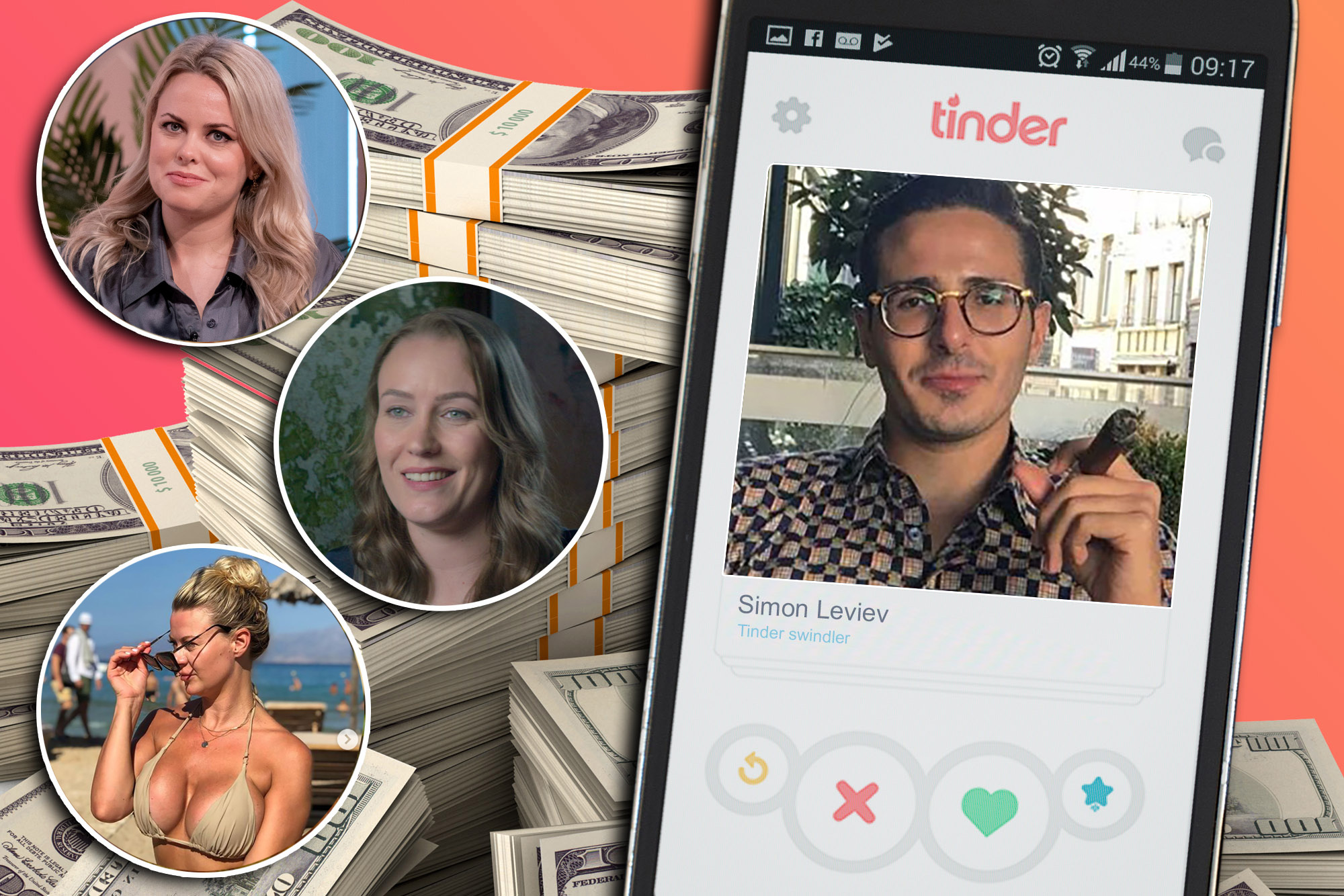 When Cecilie Fjellhoy, a 29-year-old Norwegian grad student living in London, swiped right on a 28-year-old supposed billionaire diamond heir on Tinder in 2018, she thought she’d found her Prince Charming. But the supposed dream man, who called himself Simon Leviev, turned out to be a nightmare, an international con man that duped her out of $250,000 and landed her in the psych ward.

“When I saw Simon’s pictures, he had the kind of look that I like,” Fjellhoy says in the film.

Leviev’s profile showed a man who appeared to live a jet-setting life full of stylish suits and designer clothes, sipping cocktails on exotic beaches and attending high-powered business meetings. Fjellhoy had no reason to doubt that he was the “Prince of Diamonds” that he portrayed himself to be. She even Googled him, and found that there was indeed a billionaire Russian-Israeli diamond mogul, Lev Leviev a k a “The King of Diamonds,” who she took to be her suitor’s father. In reality, the two men weren’t related, and Lev doesn’t have a son named Simon.

“This guy is just having a very different life than I ever would experience, I was just thinking it would be kind of cool to meet up,” Fjellhoy says.

Cecilie Fjellhoy tells the story of her ill-fated romance with a con man in “The Tinder Swindler.” Courtesy of Netflix

On social media, “Simon Leviev” appeared to be a man of means.SIMON LEVIEV/FACEBOOK

Simon Leviev’s Tinder profile showed the life of a man who was apparently the heir to a diamond empire who frequently took private jets. Courtesy of Netflix

After several lavish dates, including one on a private jet, Leviev asked Fjellhoy to be his girlfriend and started referring to her as his “future wife.” But, since he traveled constantly for his supposed work, much of their relationship was long-distance, conducted through texts and calls with occasional visits. Leviev told Fjellhoy that the diamond industry was “dangerous” and he had unspecified “enemies.” To back up his claims, he showed her photos of bullets that he’d been sent in the mail and an image of his bodyguard, Peter, looking bloody and beat up after an “attack.”

“He said, ‘They’re going after me, thank God for Peter – if not, I would have been dead,’” Fjellhoy says in the film.

Leviev then claimed he was unable to use his credit cards because his enemies could trace him that way. When he asked Fjellhoy if he could use her American Express card temporarily, for “two weeks or something,” she didn’t hesitate.

Norweigian woman Cecilie Fjellhoy was duped by a Tinder con man when she was a grad student in London.Ken McKay/ITV/Shutterstock

“I’m his girlfriend. Of course we’re going to help each other, it wasn’t even a question,” she says. She also had no reason to doubt that he could pay her back, since he foot the bill on all their dates and she believed that he was a billionaire. In the space of a month, she lent him nearly $100,000.

“Every second or third day is a new request,” she says in the documentary. “Each time he maxes out the card, I have to take out a new loan.”

At the time, Fjellhoy believed that she was paying to support Leviev and his team and fund expensive business lunches in Stockholm, where her love had fled for supposed safety reasons. In reality, he was using Fjellhoy’s money to take a new Tinder target — Sjoholm — out on the town.

Before long, Fjellhoy had lent him $250,000. He sent her a check to reimburse her for $500,000 — appearing generous, since that was for more than she had lent him — but it didn’t go through. Confused, she contacted American Express and had a meeting with two agents who asked her to share a photo of her boyfriend.

Pernilla Sjoholm is a Swedish woman who also fell victim to “The Tinder Swindler” and unwittingly went out on Cecilie Fjellhoy’s dime.pernillaelisabeths/Instagram

“They looked at each other and they say, ‘That’s the guy,’ ” Fjellhoy says. “They said, ‘He’s a professional, he does this for a living. Everything is a lie. He’s not a prince of diamonds, son of a billionaire.’ The man I love was never real, he faked everything. It was horrible, because in a sense, I still loved him — or the person I thought he was … I don’t understand how someone can be so f – – king evil. I felt that he knew me.”

In debt and suicidal

She returned home to Oslo to stay with her mother, becoming so despondent about her debt, she considered suicide and checked herself into a psych ward. While there, she contacted American Express to find out more information and learned that her lover’s real name was Shimon Hayut and that he’d been arrested in 2015 for defrauding three Finnish women.

“I had to stop him,” Fjellhoy says.

She reached out to Norwegian newspaper Verdens Gang and sent journalists there nearly 400 pages of her text correspondence with Leviev.

It is still unclear how many women Shimon Hayut conned, but in a new Netflix documentary, it is estimated that he swindled $10 million.simon_leviev_official/Instagram

Thanks to Fjellhoy’s tip, VG journalists including Natalie Remoe Hansen, Kristoffer Kumar and Erlend Ofte Arntsen were able to track down Hayut’s mother in Israel, who denied having contact with him in years. The Israeli police, meanwhile, confirmed that Hayut is an Israel-born fraudster who fled in 2011 to skip out on sentencing for fraud, theft and forgery. He served two years in a Finnish prison from 2015 to 2017 for defrauding several women, before he was sent back to Israel in 2017.

Using a fake passport, he fled again, and continued to prey upon women such as Fjellhoy, Sjoholm and Charlotte, using their money to fund his lavish lifestyle and continue his con. The documentary estimates that he’s swindled $10 million, and the journalists in the film say he had at least a dozen victims — and likely many more. (The filmmakers reached out to Hayut for comment on the allegations in the doc, and he responded by calling it “defamation and lies.”)

Victims all over the world

“We mapped out at least 13 cases, with some of them containing more than one person, families and couples,” Arntsen told The Post. “But this is only what we were able to verify. In our research we came across huge amounts of photos and material that showed different women we not always managed to identify, meaning there could be victims we don’t know about.”

“The response [to initial reporting of Fjellhoy’s story] was overwhelming,” journalist Hansen says in the film. “We were contacted by victims all over the world…he was reported to the police in at least 7 different countries.”

Since he was using other people’s credit cards to travel, he was difficult to trace. Because he conducted his grift on women who lived all over the world, it also made it difficult for local police in each woman’s hometown to go after someone who was “a small scam in their world,” VG journalist Arntsen explains in the documentary. “It’s almost the perfect scam.”

The so-called “Tinder Swindler” is arrested in Greece traveling on a fake passport in 2019 — but, his stint in prison didn’t last long. The man who called himself Simon Leviev was born Shimon Hayut. AFP via Getty Images

But thanks to intel from Fjellhoy, and later Sjoholm and Charlotte, Interpol caught him in Greece in 2019. He was sentenced to 15 months for the fraud he committed in Israel.

But, it’s not quite a happily-ever-after ending. Hayut was released early, in May 2020 after just five months and amid COVID-19 prison concerns. He is living as a free man in Israel. Fjellhoy and his other victims are still imprisoned by debt, slowly digging themselves out of the deep financial holes he pushed them into.

“The only thing we can do is get his face out there,” Sjoholm says in “The Tinder Swindler.” “If people know who he is and recognize his face, he can’t do this anymore.”

Michael Jackson lookalike shuts down plastic surgery accusations
My boyfriend conned me out of $251K and left me suicidal
We use cookies on our website to give you the most relevant experience by remembering your preferences and repeat visits. By clicking “Accept All”, you consent to the use of ALL the cookies. However, you may visit "Cookie Settings" to provide a controlled consent.
Cookie SettingsAccept All
Manage consent