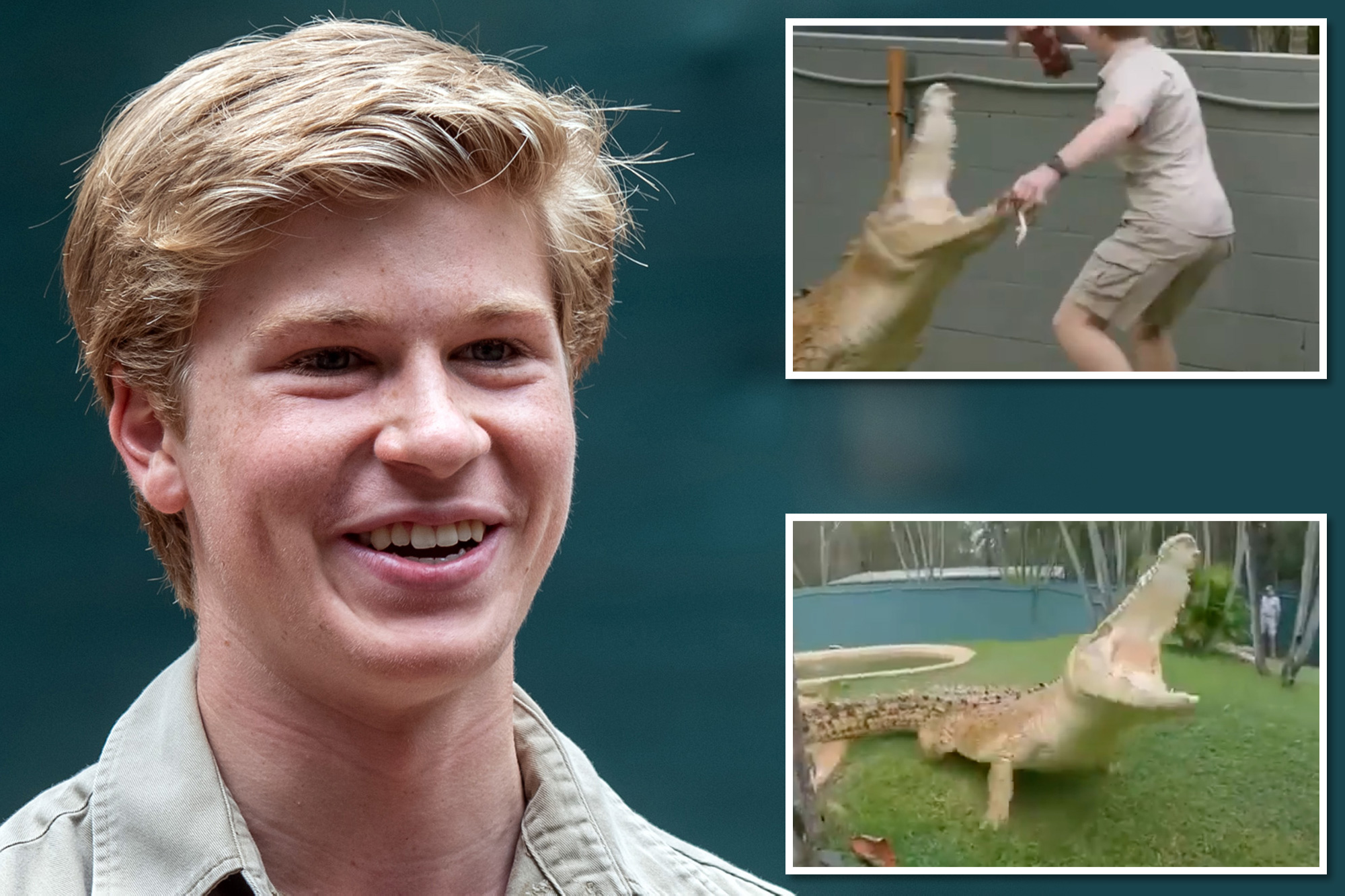 A 12-foot reptile was croc-ing Robert Irwin’s world during the season finale of his show, “Crikey! It’s the Irwins.”

A leucistic (nearly white) saltwater crocodile named Casper nearly attacked the son of the late Steve Irwin on the series while filming at the Australia Zoo.

Casper almost jumped at Robert, 18, when he was trying to see if the croc was comfortable enough in a new habitat. Irwin attempted to give Casper some food; however, the reptile pursued Robert and started snapping its long jaws at him.

The teen was forced to flee and yelled “Bail, bail, bail” to the rest of the cast and crew filming the frightening scene.

Irwin shared a clip of the wild attack on Instagram, writing: “We’ve definitely saved the best for last, including one of the most intense croc feeds I’ve done! We prioritize natural behavior with our crocs.”

In a terrifying clip from the season finale of his show, “Crikey! It’s the Irwins,” Robert Irwin was nearly attacked by a crocodile. WireImage; Instagram

He continued, “By getting in their enclosures with them, and letting them put on those huge strikes from the water’s edge, they get to use all of their predatory instincts and they just love it! Plus we can educate everyone about their conservation.”

“But safety for us is also crucial and you definitely have to know when to call it. And with such a powerful and quick croc like Casper we had no choice but to bail,” Irwin said.

Casper currently resides in the Australia Zoo and is one of two leucistic saltwater crocodiles that live there. The word “leucistic” essentially means that an animal has a large reduction of skin pigment.

Casper’s live-in girlfriend, Wendy, is also a leucistic saltwater crocodile. The zoo tweeted a little factoid about him last year, explaining: “Casper sure is a stunning crocodile! Due to a condition called hypomelanism, he’s white in colouration meaning he would’ve been predated on at a young age in the wild. Thanks to Steve & Terri, he’s living a long & happy life with his girlfriend, Wendy, here at #AustraliaZoo.”

In the clip Irwin shared on social media, he gave some insight into the animal’s behavior. “If he’s coming out of the water giving big strikes, that means he’s gonna be ready for the Crocoseum show,” the reality star said.

Casper is shown in his natural habitat at the Australia Zoo.Instagram/@robertirwinphotograph

“Casper has such a wild behavior, and since Dad first got Casper, he’s had that instinct. I’ve got no idea how he’s going to react, and, honestly, that’s quite terrifying,” he continued. Steve rescued Casper back in 2002.

“Crikey! It’s the Irwins” airs on Animal Planet and follows Irwin as well as his mom Terri and sister Bindi as they run the zoo.

Bindi and Robert’s father died in 2006 at the age of 44 while shooting a documentary in Australia’s Great Barrier Reef. The show uses archival footage of the “Crocodile Hunter” star and pays tribute to his legacy.