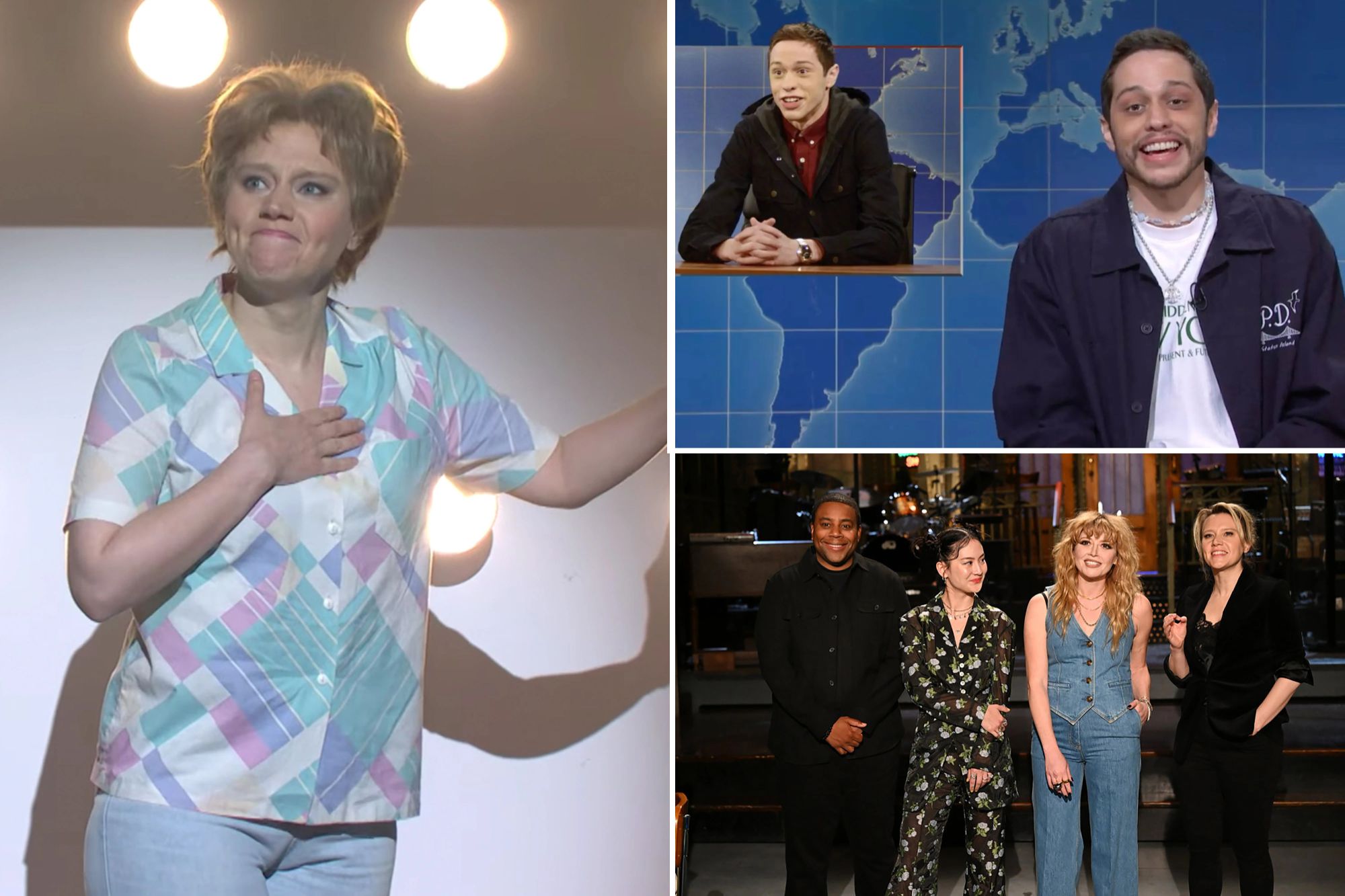 “Saturday Night Live” kicked off its season finale with a nod to departing cast members Pete Davidson and Kate McKinnon.

McKinnon was showcased in the cold open, playing her recurring character Mrs. Rafferty, who is frequently abducted by aliens.

Strong and Lyonne told officials about how they learned about universal languages, heaven and the elemental forces of love, while McKinnon’s character had a far more violating experience.

“I get on board and the grey aliens, God bless them, are already standing in a line waiting to bat my knockers around,” Mrs. Rafferty said, in between drags of her never-ending cigarette.

Kate McKinnon was showcased in the cold open, playing her recurring character Mrs. Rafferty — who is frequently abducted by aliens.Youtube/SNL

“It’s a jungle down there. I got more hair poking out the sides than a hipster’s beard stuck out of an N-95.”

When the feds said the aliens agreed to share information with the government in exchange for a permanent human spaceship resident, McKinnon signed up, and became emotional as the studio audience gave her a rousing ovation.

“Earth, I love you, thanks for letting me stay awhile,” she said, before delivering one last “live from New York it’s Saturday night” tagline after 10 years on the show.

“Hello Colin and Jay and millions of people only watching to see if I bring up Kanye,” the Staten Island native said.

Davidson, who has rarely appeared on the show in recent months, said when he started on “SNL” people thought he was racially ambiguous.

“Now everyone knows I’m white because I became hugely successful while barely showing up to work,” he cracked.

Davidson gave a shoutout to Executive Producer Lorne Michaels, who took a chance on hiring the comic when he was just 21.

“He led us through the COVID-era, even though the only time he wears a mask is at his ‘Eyes Wide Shut’ parties,” Davidson joked.

“Thank you for believing in me and allowing me to have a place that I can call home, with memories that will last a lifetime. So thank you guys,” he said earnestly to the cast and crew.

Lyonne’s monologue played up her “real New Yorker” status, and brought out her friends and former “SNL” cast members Fred Armisen and Maya Rudolph, who did impressions of the “Orange is the New Black” star.

“‘SNL’ combines everything I like. New York City, show business, people who have done the same things since the 70s and different unions fighting,” the child actress said before showing an early clip of her on “Pee-wee Playhouse” and discussing her battle with drugs.

“There’s always hope in despair and there’s always a reason to get back in the ring and fight another day,” she said to applause.

A fake voting public service announcement featured cast members who did not suffer from a disability but were “just plain stupid.”

“Just because you are a stupid person doesn’t mean you don’t have a choice, so get out there and vote,” a voiceover said.

Pete Davidson gave his “Weekend Update” to talk about his eight-year tenure on Saturday Night Live.Youtube/SNL

“My stupid vote counts as much as anyone else’s,” Lyonne said.

“And sometimes way more, like in my county,” Strong offered.

“I watch one channel and I get so mad,” James Austin Johnson said.

Day and Lyonne portrayed chain-smoking radio announcers at Yankee Stadium in 1951 whose broadcast was taken up a few notches after Lyonne was prescribed methamphetamine for her cold.

The “cold pills” led Lyonne’s character to miscall infield pop-ups as homeruns and gossip about the player’s wives and alcohol problems.

“How the hell did Joe Joe DiMaggio, the ugliest son of a bitch in baseball, snag that broad [Marylin Monroe]?” she asked.

The broadcast quickly cut away to Johnson’s adman, who was promoting “Mitchum, the businessman’s scotch.”

Thompson played a bandleader whose stage act was overshadowed by a personal revelation from his harmonica player (Lyonne) who also doubled as his landlord and roommate.

On “Update,” fake anchor Colin Jost joked about Taylor Swift mining her failed relationships with celebrities for lyrical content in connection with her commencement address at New York University.

“Because college is a lot like breaking up with Taylor Swift, you’re still going to be paying for it decades later.”

In a bizarre “Dallas” meets “Weekend At Bernie’s” 80s skit, Heidi Gardner shot and killed her misogynistic boss (Lyonne) ahead of a meeting with shareholders Armisen and Day.

Gardner’s co-workers, Strong and Ego Nwodim, then tried to puppeteer the limp boss so his business partners wouldn’t notice he was dead.

A commercial touting “gray adult pigtails” for women of a certain age featured Kyle Mooney as a sculptor that lived in the woods and had a harem of older hippie woman that hadn’t updated their hairstyle.

“You’re unique, you love art and you want people to see you and say ‘got it,’” the commercial said.

Japanese Breakfast singer Michelle Zauner led the crunchy group in a sing-along to close out the skit after the indie pop band performed their songs “Be Sweet” and “Paprika.”

Masked cast members hugged each other during the “Goodnights/Closing Theme” with no closing references to McKinnon, Davidson or fellow reported departing cast members Bryant and Mooney.

“Have a great summer,” Lyonne said.

Kandi Burruss’ Night Out With The Girls Has Fans Cheering For Them
Inside the home where Dennis Hopper’s marriage unraveled
We use cookies on our website to give you the most relevant experience by remembering your preferences and repeat visits. By clicking “Accept All”, you consent to the use of ALL the cookies. However, you may visit "Cookie Settings" to provide a controlled consent.
Cookie SettingsAccept All
Manage consent