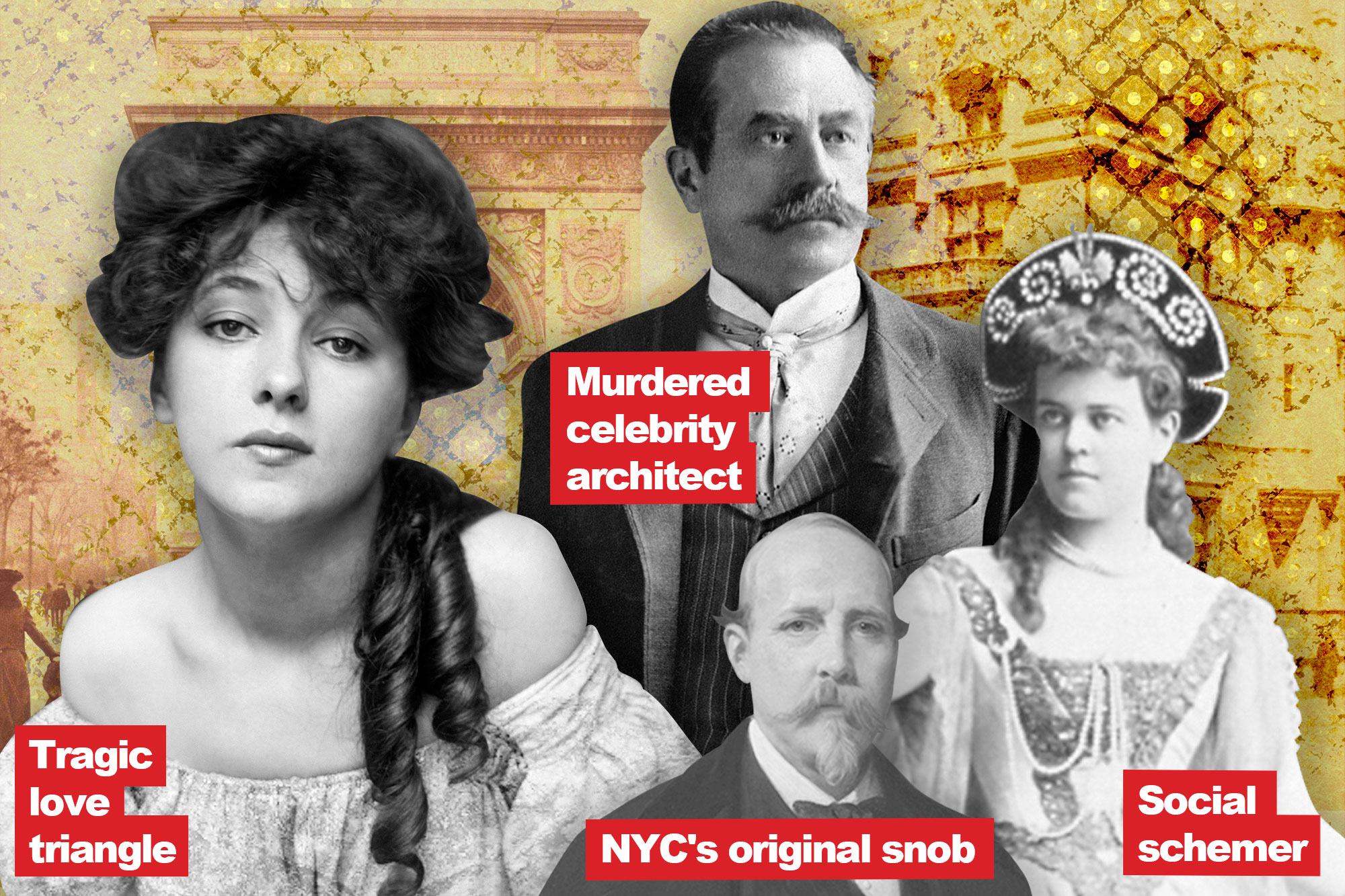 Eat your hearts out, “Real Housewives.”

HBO’s new show “The Gilded Age,” premiering Monday at 9 p.m. EST, chronicles the lifestyles of the rich and famous in Manhattan during the late 1800s — with ostentatious displays of wealth, ridiculous parties and heaps of tabloid-worthy gossip and scandal.

The lifestyles of the rich and famous in Manhattan during the late 1800s is chronicled in HBO’s new series “The Gilded Age.”Alison Cohen Rosa

Created by Julian Fellowes, the man behind “Downton Abbey,” the series also highlights the deep-rooted rivalries and prejudices among NYC high society (and the social climbers desperate to get a leg up).

Here, The Post looks at some of the wildest stories of the real Gilded Age.

The Washington Square Arch architect murdered for being a ‘rapist’

To this day, the creations of Gilded Age architect Stanford White define New York City: the Washington Square Arch, Judson Memorial Church and the Players Club, among many other wonders.

But it was his 1906 murder, and the shocking reason behind it, that really rocked the city.

Celebrity architect Stanford While was murdered while attending a play at the original Madison Square Garden.Bettmann Archive

White, 52, had attended the premiere of the musical “Mam’Zelle Champagne” at the original Madison Square Garden, which he also designed. But the show was a flop and theatergoers left early. Among them were Harry Kendall Thaw — 35-year-old heir to the Pennsylvania Railroad fortune — and his 21-year-old wife, Evelyn Nesbit.

When bullets hit White in the face and he fell to the floor, the crowd first thought it was part of the show. But he had ben shot dead by Thaw.

“I did it,” Thaw said while being escorted from the theater, “because he ruined my wife.”

Five years earlier, Nesbit was a teenage model and chorus girl who was seduced by the married architect to visit his secret lair on 24th Street — complete with a red velvet swing and a bed topped by a light-up, mirrored canopy.

Nesbit later testified that she drank champagne, blacked out and woke up naked with White next to her. She saw blood on the sheets — White, she would allege, had drugged and raped her.

White designed the Washington Square Arch (above), as well as Judson Memorial Church and the Players Club in Manhattan.Getty Images

Still, Nesbit continued seeing her attacker, who lavished her with furs and jewelry, until she fell for coal baron Thaw.

Nesbit resisted Thaw at first, and he became jealous of her relationship with White — a matter made worse by the architect blackballing Thaw from the exclusive Knickerbocker Club.

Once Nesbit and Thaw began dating and she confided in him about the attack, Thaw became enraged, hiring eight detectives to follow White, at a sum of what would be $170,000 today. (As to why he did this? Who knows.)

White was killed by Henry Thaw (left), who claimed he was getting revenge for White having drugged and raped Thaw’s wife, chorus girl Evelyn Nesbit.Getty Images; ZUMAPRESS.com

After the murder, Thaw was sentenced to incarceration in a hospital for the criminally insane in 1916. Some historians have speculated Nesbit’s testimonies about the White rape may have been coerced by Thaw’s defense lawyers.

In her memoir “Prodigal Days,” Nesbit described the events of that night differently: White didn’t drug her; she had too much champagne and fell asleep.

She went on to carve out a successful career in silent films. Just before she died in 1967, Nesbit summed up her part in the trial of the century: “I rocked civilization.”

Samuel Ward McAllister decided if you were in or out.

Wealthy by marriage, he kept a list — The Four Hundred — of the people who mattered most in the city’s social scene. The New York Times published it, and those who were left off were not happy. (See: Alva Vanderbilt, below.)

Ward McAllister kept a list of the 400 most prominent people in Manhattan society — angering those left of it.NY Historical Society

“[The Four Hundred] was the epitome of excess,” historian Tom Miller told The Post. “It invented a society that hadn’t existed before.”

McAllister (one of the few real-life characters on the TV show, he’s played by Nathan Lane) claimed 400 was the number of people in New York who felt at ease in the ballrooms of high society. Anything beyond that, he sniffed, was riff raff.

“He said: ‘if you go beyond that number, you find you run into people who make others feel uncomfortable,’” Miller explained.

Debra Schmidt Bach, curator of decorative arts and special exhibitions at the New York Historical Society, told The Post that McAllister was “an absolute elitist … He was apparently very charming and  good at conversation, but he was only interested in people descended from ‘Knickerbocker families’ — those who could trace their roots to colonial Dutch families.”

Bach added that McAllister reportedly bragged that he only had time for elites whose ancestors were “the Huguenots, the Pilgrims or the Puritans.”

The list, meanwhile, was also McAllister’s way of getting invited to the city’s best parties and events — a goal since he had moved to the city in the mid-1800s from Savannah, Ga.

Miller said that, as soon as McAllister arrived in Manhattan, he spent the $1,000 he’d inherited from his grandmother on one set of dress clothes to wear to a society affair. Later, the prominent Manhattan socialite Caroline Astor would become his patron and close friend.

Caroline Astor was a patron and friend to McAllister — until he screwed over his wealthy friends with a tell-all book.Heritage Images via Getty Images

McAllister quickly found that the way to gain the respect of the wealthy was to prey on their inferiority. He told a journalist that $1 million was “respectable poverty” and enjoyed belittling Midwestern ex-pats he considered nouveau riche.

He drew the ire of the Chicago Times after writing that, if hostesses from that city wanted to be taken seriously in New York, they should hire French chefs.

He was also known to take cash for getting wannabes invitations to fancy parties — sometimes for as much as $250,000 in today’s money.

But, much like Truman Capote would do 85 years later, McAllister wrote a book that burned the very people who had embraced him.

“It was a tell-all that laid out all the dirty laundry [of the elite],” Miller said. “He didn’t name names specifically, but it was easy to read between the lines. He would use initials — ‘Mr. SV did that,’ or ‘Mrs. B did that’ — so everyone knew who they were.”

When he died five years later, McAllister had fallen from grace to the point that hardly anyone showed up for his funeral — including Mrs. Astor. She had a dinner party that night.

The Vanderbilt who schemed her way into high society

While she and her husband, William Kissamm Vanderbilt, were incredibly rich thanks to his family’s shipping empire, they weren’t embraced by the city’s upper crust.

Railroad money was “new money,” and looked down upon by clans like the Astors, who had made their fortune through real estate and, before that, the fur trade.

Excluded from McAllister’s “The Four Hundred,” Alva Vanderbilt showed up other wealthy Manhattanites with the party to beat all parties.Wiki Commons

But Alva, who had been excluded from McAllister’s “The Four Hundred,” was determined to elbow her way to the top of it.

“The first step to get included in high society was to get the attention of high society,” ” said historian Miller, who runs the blog Daytonian in Manhattan.

And that meant outdoing them. So Alva enlisted famous architect Richard Morris Hunt, — who designed the Grand Hall of the Met — to build a French Renaissance-style manse on Fifth Avenue and 52nd Street, called “The Petit Chateau.”

But there was nothing petite about it: Completed in 1882, the four-story, castle-like home occupied a city block and had a 1,750-square-foot banquet hall that proved the perfect backdrop for Alva’s grand scheme.

She sent out more than 700 invitations to a lavish ball — said to cost more than $5 million in modern money. But she purposely left Carrie Astor, the city’s It Girl, off the list. When Carrie complained to her mother, who just happened to be McAllister’s patroness, that she wasn’t invited, Mrs. Astor was forced to invite Alva to tea. At last, Alva had her pass into high society.

“It was such a devious and wonderful move,” said Miller.

And Alva, whose husband was cheating on her, wasn’t done shocking her new peers.

“Infidelity was rampant and wives were supposed to turn a blind eye,” said Miller of the era.

Alva instead filed for divorce, an unheard-of move in 1895. It became, as one newspaper deemed it, “the biggest divorce case that America has ever known.”

The Gilded Age doyennes resented her for bringing their elite circles into disrepute, and Alva — now with a $10 million divorce settlement — was rendered an outcast.

But by then she’d moved on to other pursuits, including her second husband, Olivier Hazard Perry Beaumont, a wealthy politician.

She also became a key figure in the women’s suffrage movement and helped establish and lead the National Women’s Party. In 2016, Barack Obama designated a home she had bought for the group as a national monument.

And Alva ultimately found yet another way to show up the Manhattan beau monde: She married her daughter Consuelo Vanderbilt off to the Duke of Marlborough, a member of British royalty.