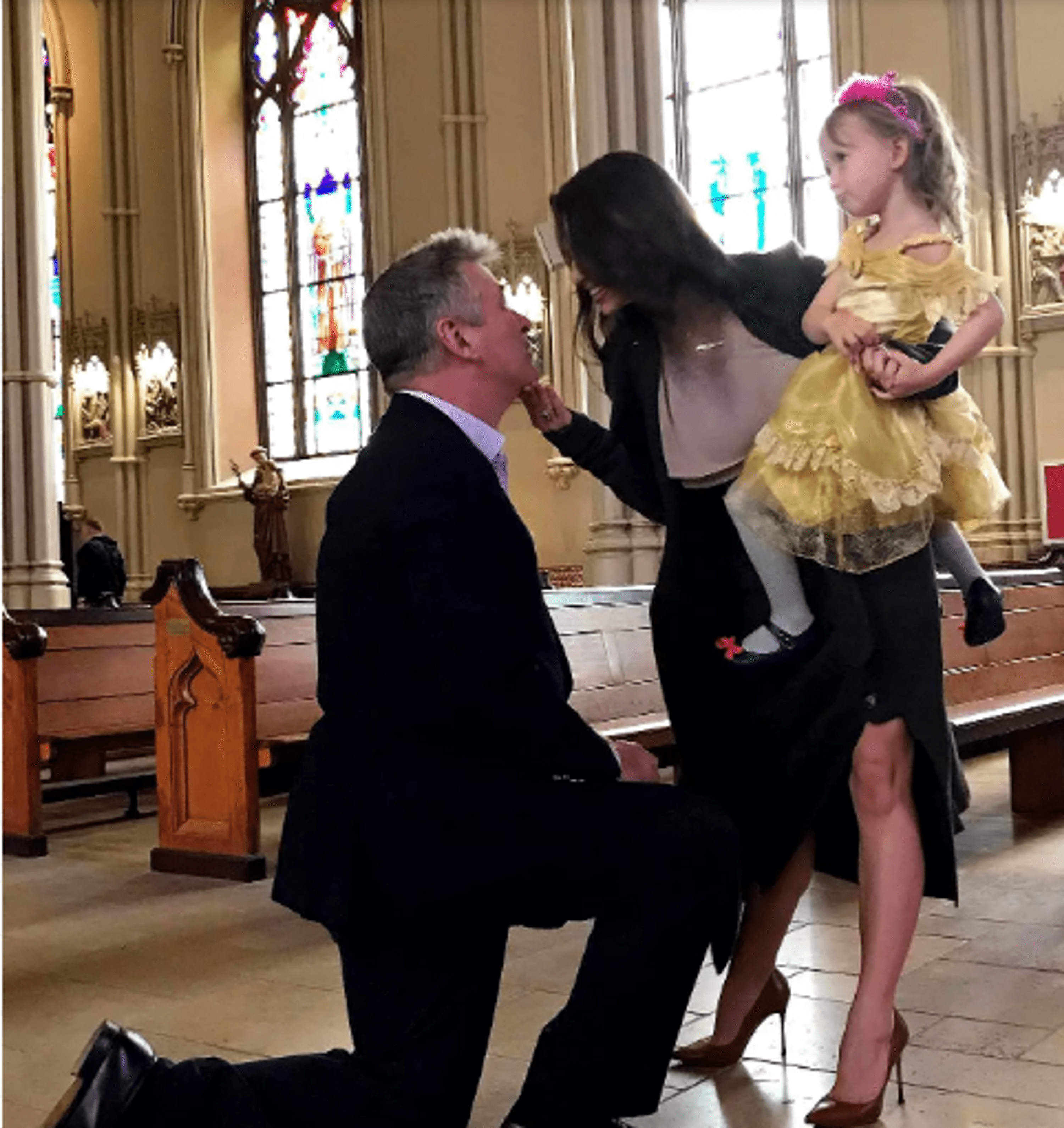 38-year-old Hilaria and 64-year-old Alec Baldwin celebrated their 10th wedding anniversary. The Hollywood actor’s wife thanked him for the happy years and children. A pregnant mother of many children celebrated a special event in her life. Hilaria released a photo in which Alec is on one knee in front of her. His wife held their little daughter Carmen in her arms.

“10 years surrounded by our children, with lots of laughter, tears, disappointment, breakthroughs, passion, fear, joy, and everything our life brings. Happy Anniversary, Alec,” Hilaria congratulated. The actor and yoga instructor got married in 2012, and a year later, they had a daughter, Carmen, their first child together. In marriage, the spouses had five more children: 6-year-old Rafael, 5-year-old Leonardo, 3-year-old Romeo, one and a half-year-old Eduardo, and one-year-old Maria Lucia. Hilaria is now pregnant with her seventh child. It became known that the Baldwins would have a daughter. Alec is also raising 26-year-old Ireland, who appeared in his marriage to Kim Basinger.

When asked why the Baldwins continue to expand their family, the actor replied that being a parent is the highest gift and the most exciting journey in the world. If not for the miscarriages that Hilaria suffered two years ago, the couple would now have nine children. In a previous post, Alec Baldwin and his wife, Hilaria Baldwin , attended the Broadway premiere. This is the first appearance of the 64-year-old Hollywood actor after the tragedy on the set. Alec and a pregnant Hilaria appeared on the red carpet. The couple came to see the new Broadway musical The Executioners. The couple spent the evening together, away from their five children. Baldwin wore a classic charcoal suit and a burgundy shirt to the premiere, which was paired with dark brown boots. Hilaria, in an all-black outfit, posed next to her husband. The actor’s wife wore a coat, shirt, and dress pants. Despite the position, Hilaria could not refuse high-heeled shoes.

Barbadian singer Rihanna was first noticed in the world after the birth of her son
The press discusses the real relationship between Meghan Markle with the staff of the palace
We use cookies on our website to give you the most relevant experience by remembering your preferences and repeat visits. By clicking “Accept All”, you consent to the use of ALL the cookies. However, you may visit "Cookie Settings" to provide a controlled consent.
Cookie SettingsAccept All
Manage consent