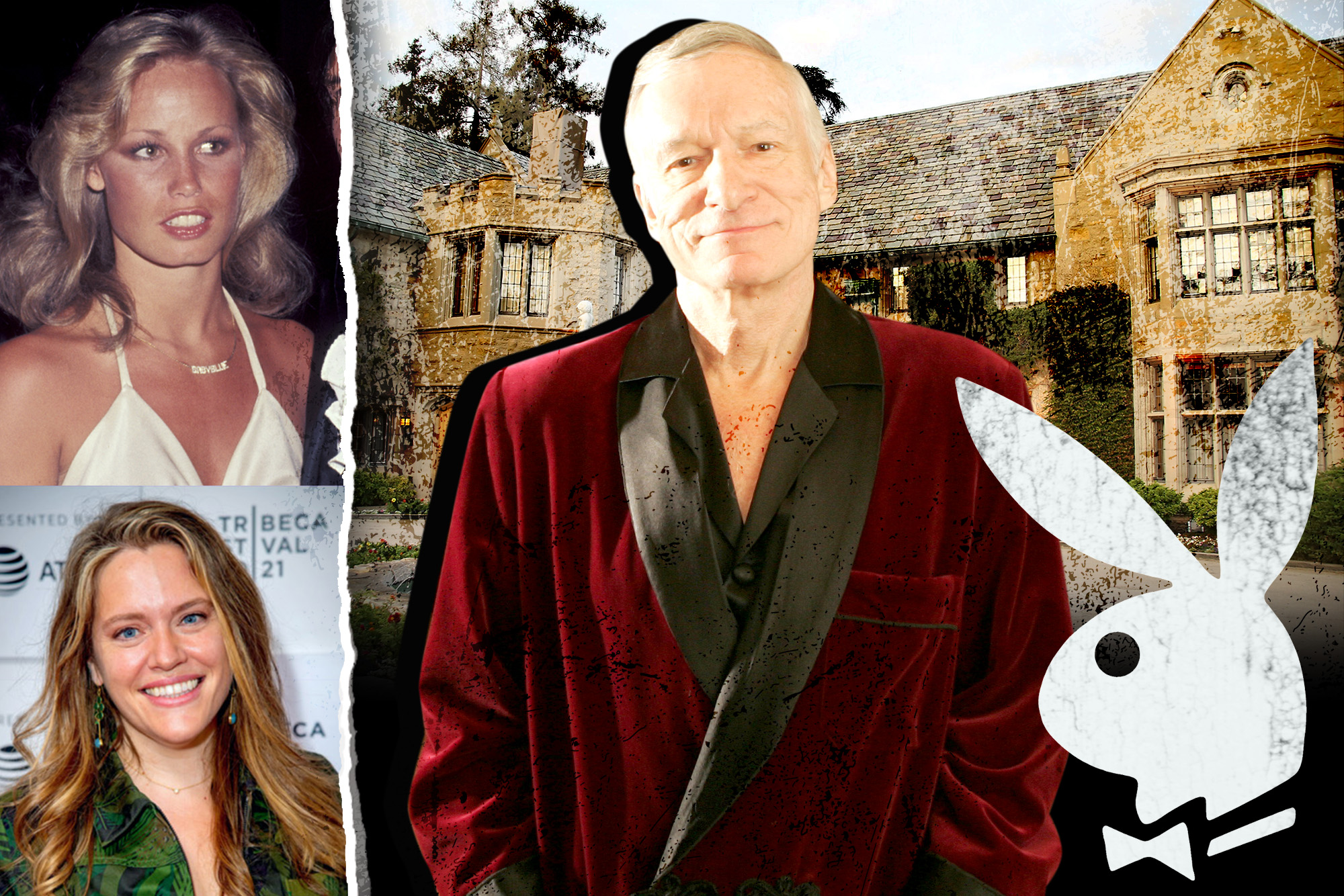 When bedding buxom bunnies became too boring for Playboy baron Hugh Hefner, he allegedly moved on to dogs.

Hef’s purported penchant for bestiality is just one of the explosive claims made in the forthcoming A&E documentary “Secrets of Playboy,” out Monday.

The damning 10-part series unmasks the once-heralded late mogul — who, until now, has been revered as a god-like stud, slinking around his estate in silk pajamas and a smoking jacket — to reveal the ugly truth about the man who built his sex empire on the backs of vulnerable women.

Theodore claims Hef subjected her and hundreds of women in the Playboy world to decades of abuse and sexual assault. Ron Galella Collection via Getty

The former Sunday school teacher turned 1977 Playboy magazine centerfold model began dating Hefner after meeting him at a one of his many lascivious mansion parties. The women of the docuseries describe the weekly gatherings as a debauched scene, where high rollers like Bill Cosby, Tony Curtis, Wilt Chamberlin and Arnold Schwarzenegger were VIP regulars. In the doc, Schwarzenegger is seen wrapping his arms around the waists of two Playmates and giving each a kiss on the lips in vintage footage.

Theodore was just 19 when Hef first set his sights on her. He was 50.

“He groomed me and twisted my mind into thinking his way was normal,” she said of Hef, who died of sepsis in 2017. “He introduced me to drugs. I’d never had a drink or a drug before going up to the Playboy Mansion. And my first night there I was handed champagne and the drugs came later, and I was underage.”

Women of the “Secrets of Playboy” docuseries recount the traumatizing abuses they endured inside of Hef’s seemingly enchanted Playboy Mansion. FilmMagic

Hefner with a group of Playboy Bunnies at the grand opening of the Playboy Hotel-Casino in Atlantic City in 1981. Getty Images

“I walked in on him with my dog and I said, ‘What are you doing?’ I was shocked,” she said. “He made it seem like it was just a one-time thing, and that he was just goofing off. But I never left him alone with my dog again.”

Theodore’s revelation came as the “most shocking” claim documentary director Alexandra Dean uncovered in the year she spent chronicling the untold stories of the women who’d been chewed up and spit out by Hef’s heinous Playboy machine.

Hef allegedly took advantage of the women of Playboy since his magazine’s premier edition in 1953 until his death in 2017.Getty Images

“I didn’t go into this thinking I was going to hear these really shocking things,” said Dean, who originally had no interest in launching an investigative dig through the erotica tycoon’s dirty laundry. “I figured it’d be fun, but kind of lightweight.”

Dean had just wrapped production on Paris Hilton’s gripping “This is Paris” documentary in early 2020 when she was tapped to probe Hefner’s previously impenetrable kingdom at the dawn of the pandemic.

“But as I started to have these conversations [with the survivors of Hefner] the project transformed 180 degrees, from lightweight to super critical,” she said, deeming the documentary the crown jewel of her career.

Dean was shocked by the claim that Hefner had allegedly been sexually intimate with animals.Courtesy of A&E

“The women were telling me what they’d been through, and why it was important for us to reexamine who Hef really was,” Dean continued. “Our ideas of emancipated womanhood, sexuality and sexual freedom are all wrapped up with Playboy. But is a man like Hugh Hefner fit to define that?”

During the throes of COVID-19, Dean interviewed over a dozen of the Playboy powerhouse’s once-loyal defenders, including former corporate executives, mansion staffers and Playmates-turned-paramours like “Girls Next Door” star Holly Madison, 42.

In the doc, Madison — who beamed as one of Hef’s three towheaded trophy wives from 2001 until 2008 — likened the then-octogenarian’s harem to a “cult,” and claimed he refused to use condoms during group sex escapades.

“All the guys were laughing when Linda got out of the limousine,” Masten said. “She was drunk and drugged … They got her so messed up that they made her give the German Shepherd oral sex. You wanna talk about depravity? This is despicable.”

Masten went on to detail the repeated sexual assaults she personally endured while under Hef’s employ, including an alleged attack leveled by his good friend Bill Cosby. The doc also notes that Cosby was accused of drugging and raping an 18-year-old inside the Playboy mansion in 2008.  (Cosby has previously said that it’s been proven by law enforcement that he was not at the mansion when the 18-year-old was assaulted. When reached for comment, a representative for Cosby dismissed the various allegations in the film as “unproven.”)

Hef’s accusers claim he invited celebrities like Bill Cosby to drug and rape women inside the Playboy Mansion for years.WireImage

Masten claims that in 1979, Cosby drugged and raped her in a hotel room after a friendly dinner meeting in Chicago.

“I had blood coming down my leg because he sodomized me,” she sobbed in the doc. “Blood was dripping on the floor. I put my clothes on, but there was a lot of blood. I dripped it all the way out into the lobby of the hotel.”

To chronicle Masten’s harrowing account and the others like it, Dean used a specialized camera to interview each person remotely in order to ensure everyone’s safety.

“Initially, the interview process was totally terrifying because I worried that if I jumped on a plane to meet these people in person I might inadvertently kill them,” she said, noting that the majority of Hef’s whistleblowers were over the age of 65 and more susceptible to the coronavirus.

Prior to his death, Hefner allegedly set up roadblocks which stopped his detractors from speaking out against him.Getty Images

But for Dean, the hardest part of filming was getting the women to come clean about the horrors they’d endured at Hef’s hand.

“One of the most striking things about reporting this story was how much fear there was from the contributors about telling the truth, and how slowly they were able to open up,” said Dean. “It was a very slow process. I didn’t want to push the story too far, I really wanted people to tell me what they felt comfortable telling me, and that took a long time.”

Theodore said reliving the hell of Hef’s unbridled hedonism for the docuseries was a “triggering,” yet necessary experience.

“During this documentary there were certain things that triggered me, and it was like being in [the mansion] all over again,” she told The Post. “I feel bad that I did not stand up to Hef about the stuff he did. But I couldn’t, I’d been silenced. For the last 10 years I’ve been trying to get my story out.”

Theodore believes Hefner would call her “bitter” for blowing the whistle on his alleged misconduct. Getty Images

She claims that prior to his death, Hefner set things “in place to protect himself,” which restricted her and his other detractors from unveiling their truths.

And in the series, ex-members of the nudie mag magnate’s inner circle claim he’d outfitted his mansion with hidden cameras to record Playmates, bunnies, celebrities, law enforcers and members of the media engaging in sexually explicit and depraved acts for years. He’d allegedly threaten to leak the damaging clips if and when anyone attempted to out him for misconduct.

However, Theodore and ex-Director of Playboy Promotions Miki Garcia have spent the last decade tirelessly fighting to put an end to Hefner’s blackmail.

“In the end, we got Hugh Hefner’s last words on what happened to the sex tapes,” says a vindicated Garcia to Theodore in the doc. Their victorious feat notwithstanding, Theodore still feels “guilty” for not being able to stop Hef from wrongdoing in the past. (A Playboy representative did not respond to a request for comment on the documentary.)

“He’s not a hero, but he could have been,” Theodore told The Post. “He could’ve been a great man, but he did all these [horrible] things.”

And she believes that if Hefner were alive to witness her leading the charge of his reckoning, he’d call her “bitter” and accuse her of trying to “rewrite history.”

“Well, I am rewriting history, Hef,” she said proudly. “I’m righting it.”

Doc reveals how Kanye West’s mom inspired his ‘Jeen-yuhs’
Inside the Jihad rehab center for Guantanamo terrorists
We use cookies on our website to give you the most relevant experience by remembering your preferences and repeat visits. By clicking “Accept All”, you consent to the use of ALL the cookies. However, you may visit "Cookie Settings" to provide a controlled consent.
Cookie SettingsAccept All
Manage consent