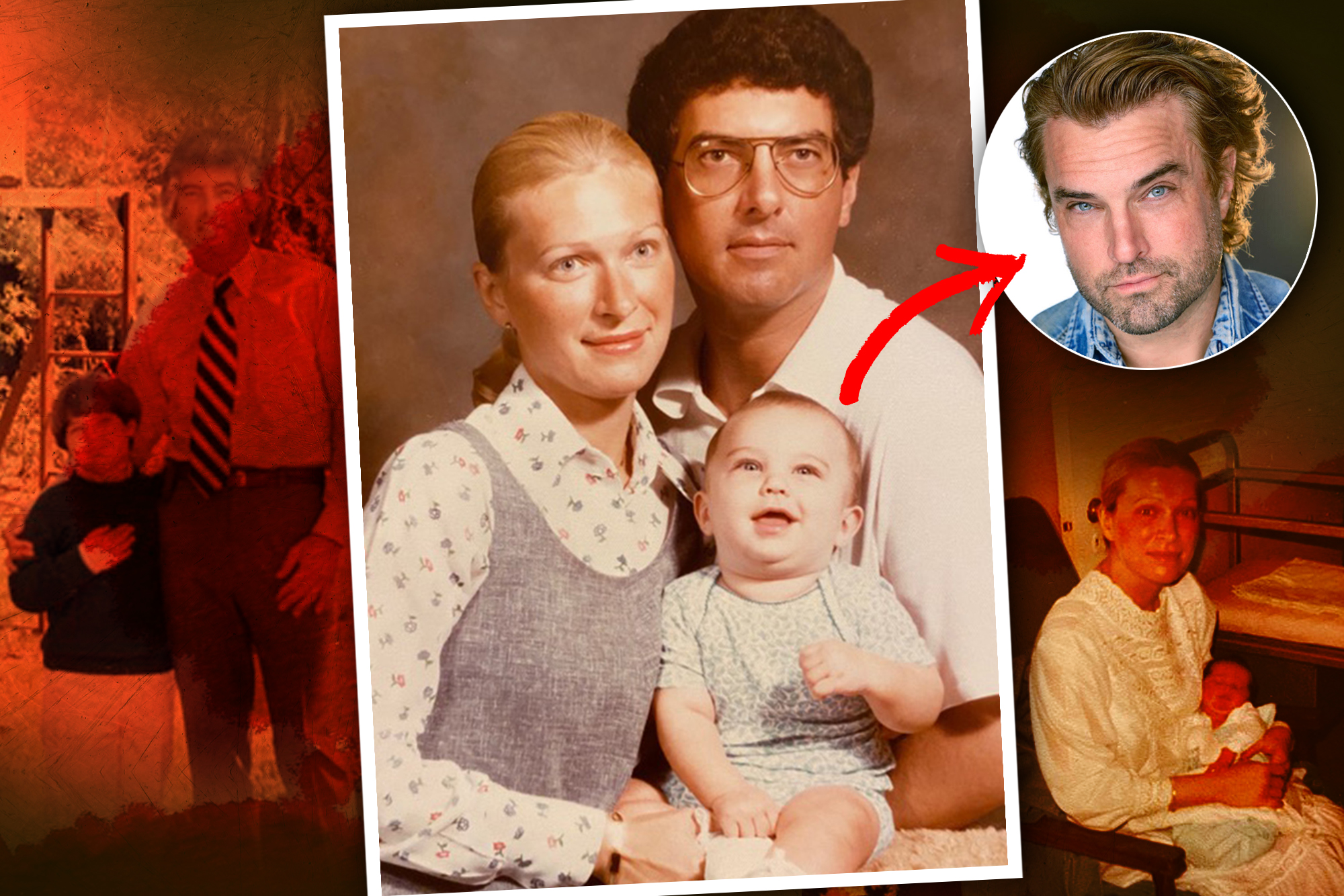 Most hosts of true crime podcasts simply discuss murders that fascinate them, but Collier Landry has actually lived through one.

On Dec. 31, 1989, when Collier was 11, his father, Dr. John “Jack” Boyle, killed his mother, Noreen Boyle, and buried her in a crypt beneath the basement of their new house. Her body wouldn’t be found until January 1990. The case became Mansfield, Ohio’s crime of the century and spawned a “Forensic Files” episode in 2000, a documentary in 2018 and now Landry’s own podcast.

“Moving Past Murder” serves as therapy and reconciliation for both Landry and listeners who are processing betrayal and trauma in their own lives.

“Hundreds of people have reached out to me on social media after listening to the podcast,” Landry told The Post. “They’ve been mistreated by family or friends and have fallen into self-harm or substance dependency. It’s good for them to see my resilience.”

Indeed, Landry has a lot to process. The death of his elegant, popular mother set off a chain of events, including near-orphanhood and permanent separation from his baby sister, a star turn as a witness for the prosecution and the inability to go to school “or even the toilet paper aisle at Walmart” without being recognized as “the Boyle kid.” (He legally changed his last name to “Landry” years ago.)

Today, Landry, 43, lives 2,000 miles away from his old hometown, in Los Angeles, where he’s a freelance cinematographer who’s worked on TV shows such as “Badland Wives” and “Every Other Weekend” and the upcoming documentary “1946.”

But Landry said that while he doesn’t let what happened on that night in 1989 define him completely, it will always play a huge role in his psyche.

Up until that night, he enjoyed a comfortable life, attending a private school with 12 students to a class and having adventures with the mother he adored.

Noreen Schmid Boyle came from a working-class background in Philadelphia and worked as a dental hygienist while supporting her husband in medical school.

Noreen Boyle used to take Collier out for all-day adventures.

In the few years before her death, she had a chance to enjoy the wealth that sprang from Jack Boyle’s burgeoning osteopath career. About one in every 13 Richland County residents was a patient at his medical practice, according to Landry.

“My mother always took me shopping — I think that was her hobby,” Landry said. “She knew I was bored, so she’d make the day end up as a life lesson or [an] educational experience. She’d take me to an art museum or a science museum. We’d talk to each other through a giant echo tube at COSI [the Center of Science and Industry in Columbus].”

While Noreen embellished on her personal history a bit to ease her insecurities — she told her affluent friends a couple of tall tales about growing up in a mansion and having an MBA from Wharton — she wasn’t a snob, Landry said.

“One thing I cherish about my mother was as soon as she met people, it was as though they’d known each other their whole lives,” he said. “She really embodied, ‘How can I connect with you?’ She taught me to be a person who cares about others in a genuine way.”

His father, however, didn’t always follow that same blueprint. While well-liked by his patients, Landry said he could be nasty and short-tempered at home. He called Collier fat. And he allegedly cheated on Noreen.

By the time the winter of 1989 rolled around, Noreen, 44, had told Jack, 46, she wanted out of the marriage, but he persuaded her to give the relationship another try by starting over in a gigantic house he purchased in Erie, Pennsylvania, where he planned to move his practice.

Meanwhile, prosecutors later claimed that Jack was secretly plotting to get rid of Noreen so he could marry his pregnant 26-year-old mistress, Sherri Campbell, and install her at the Erie residence.

Just before the clock struck 1990, while Collier was in bed at the Mansfield house, he heard two loud thuds coming from Noreen’s bedroom.

He would never see his mother alive again.

Jack Boyle is currently serving a prison sentence for the murder of his wife.

In the days that followed, Jack told Collier that Noreen had taken off on a trip. Collier knew his mother would never go away without telling him and pushed for a police investigation.

Within a month, law officers discovered the crypt with Noreen’s body in the Erie mansion.

Investigators determined that Jack had rented a jackhammer to create a hole in the floor, placed a plastic shopping bag over Noreen’s head, dropped her body into the floor cavity and then poured new cement on top and covered it with a rug. The slender woman died of blunt force trauma and suffocation.

Collier, who had turned 12 by the time the trial rolled around, testified about what he heard on the night his mother disappeared. He also detailed his father’s neglect and physical abuse toward him and his mother.

The murder trial, shown on TV, turned into such a sensation that the streets of Mansfield, population 46,000, would empty on the three days when Collier was on the stand, John Futty, a reporter who covered the court proceedings for the Mansfield News Journal, told The Post.

After his mother’s murder, Collier was sent into foster care.

Although viewers expressed amazement at not only his intelligence but also his calm demeanor, Collier faced inner turmoil. “I knew that if the jury voted to acquit, my father would kill me for revenge,” he said.

By the time the prosecutors won a first-degree murder conviction, Collier had spent months with foster parents who he said “were not good people.”

His foster mother and father ultimately adopted his cute toddler sister — whom the Boyles adopted from Taiwan in June 1989 — but a boy in his tween years wasn’t exactly a hot commodity to them.

Eventually, a caring couple, the Zeiglers, adopted Collier and, suddenly, he had not only two parents and a 9-year-old brother but also a close-knit extended family of aunts, uncles and cousins that numbered more than 30. “All of them were so welcoming and just very kind,” Landry said. “There was no weirdness.”

Landry says that hating his father won’t change anything.

At his new public school, however, some kids picked on him for being a killer’s son, though “I adjusted eventually,” Landry said.

But he had more trauma on the horizon thanks to his father’s attempts to win a new trial.

From his prison cell, Jack Boyle insisted that his wife was still alive, that it was some other, anonymous woman found underneath the floor because the coroner’s report listed the wrong eye color.

Collier had to bear the exhumation of his mother’s body only to find out it was indeed Noreen. (Someone had mistakenly noted “brown” rather than “blue” eyes on the paperwork.)

Noreen asked Jack for a divorce in the winter of 1989.

Next up, Jack went into full “smear the victim” mode in hopes that the authorities would find new suspects. He said Noreen participated in a baby-selling operation, was an international gold jewelry smuggler and had plotted to burn down the mansion in Erie out of jealousy.

At some point, the 6-foot-3 Jack changed his original story completely. In a popular go-to excuse for wife killers, he said he ended his spouse’s life by accident while defending himself because she attacked him first. And he covered it up only out of fear he’d take the blame.

While Collier found the accusations disturbing, he never believed any of them, nor did Noreen’s old friends or the legal system.

In the meantime, Collier was growing up and planning his own future in the entertainment industry. As a child, he had enjoyed playing a miniature harmonica and singing for his father’s patients — Jack took him on his rounds in the hospital in one of their few father-son bonding experiences — and he eventually studied at the Ohio University School of Music.

Landry worked as a print model before getting into the film industry.Marc Cartwright

The 6-foot-2 young man did some print modeling, and later he learned about cinematography by at first doing unpaid production work.

Landry, who works in film, has always had an affinity for the arts.

In 2018, he produced a documentary, “A Murder in Mansfield,” which featured a jailhouse meeting with his dad to get some answers — namely, why he chose murder over divorce. Jack stuck with the accidental death story, which deeply hurt Collier, but the two men still shared a surprisingly genuine on-camera hug.

Landry acknowledges that from time to time over the years, he has put money into Jack’s prison commissary account at Marion Correctional Institution in Ohio. He believes his father is a narcissist and a psychopath, but he’s still the only father he has and hating him won’t change anything.

And Landry’s newest project, the “Moving Past Murder” podcast, has helped him to understand Jack’s manipulation all the more.

Landry has begun reading the roughly 500 seemingly innocent letters his father has written him from prison over the years, sharing bits of family history, like a story about how his grandfather who went to Catholic school would transport the nuns around town.

Landry hopes that his podcast will help others heal from trauma.

“My father is eager to divert any attention from himself or the impact he’s had on my family, and he’s going to sit in his prison cell and write this stuff to me? He’s gaslighting,” Landry said of the letters.

One of Landry’s prospective upcoming podcast guests is a man who also had a father who murdered his mother. “He said he was suicidal, and then saw my documentary and listened to the podcast, and he realized he wasn’t alone and decided not to take his own life,” Landry said.

Landry also hears from podcast listeners who suffer the pain of more common circumstances — like having a cheating partner or a family member who unscrupulously influences them — and he thinks they can learn from the tragedy he endured.

“I believe there are people out there,” Collier says, “who can think that ‘If that guy can make something out of himself after what he went through, so can I.’”