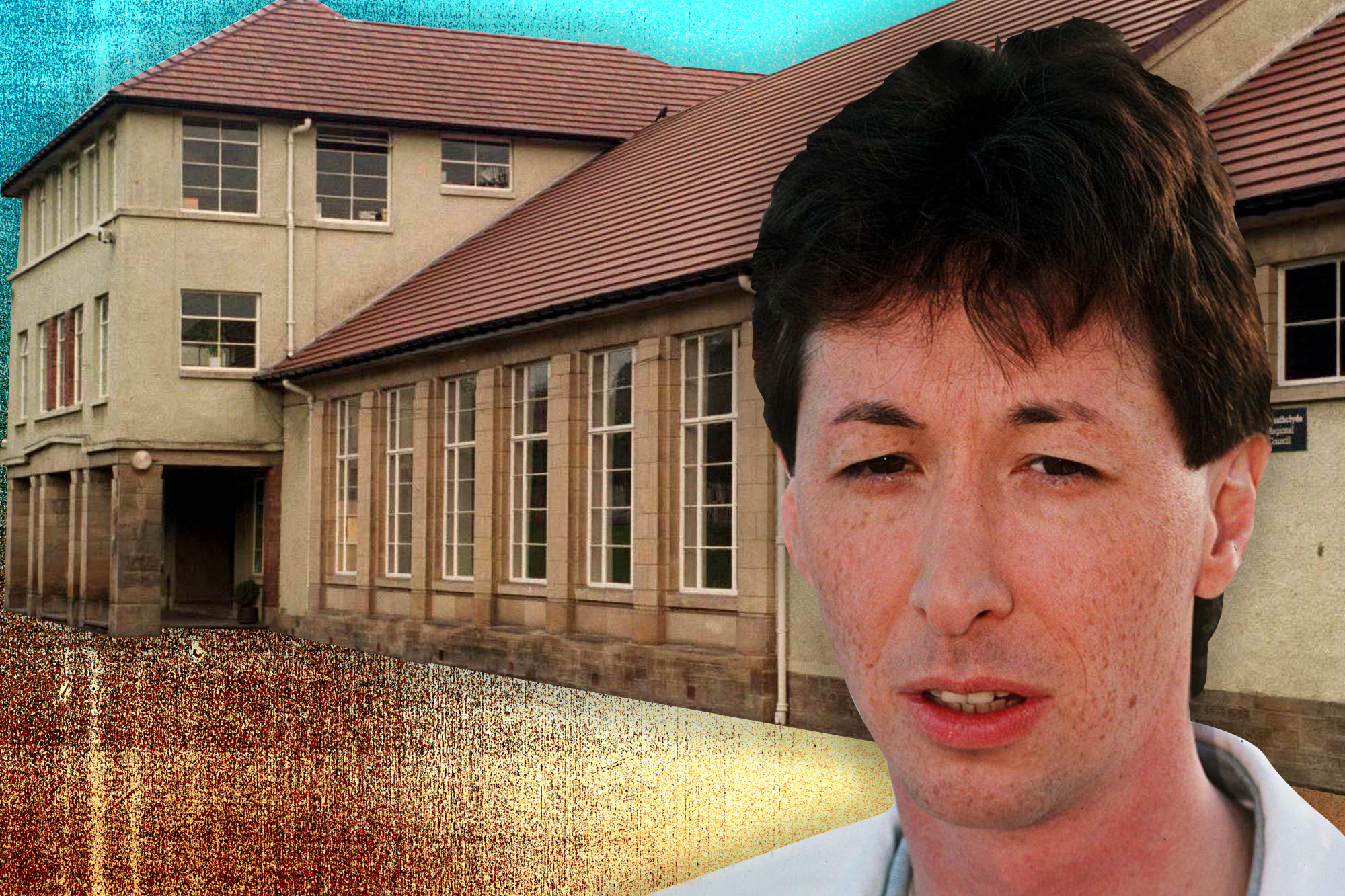 One day in 1993, the juniors at Scotland’s Bearsden Academy found out they’d have a new classmate. His name was Brandon Lee, and he made quite an entrance: Despite saying he was 15, he looked, and spoke, like an adult man.

Brandon Lee, whose real name was Brian MacKinnon, eating at TGI Fridays with high school students. For a time, he was enrolled in high school while in his early 30s. Shutterstock

Former students at the suburban Glasgow school recall their new classmate’s background, as he told it to them: He’d moved from Canada, where his mother had been an opera singer. After her death, he’d been sent to live with his grandmother in Bearsden. Initially, they say, he was mocked by other students for his strange appearance — he had a gaunt, pale face and a mop of wildly curly hair — and his propensity for answering teachers’ questions in astonishing detail. He even challenged his instructors at moments, daring his physics teacher, for instance, to define the nature of time.

The kids also giggled about his name, which happened to be the same as Bruce Lee’s son who’d died just a month before in a freak accident on the set of “The Crow” — a movie about a man who comes back from the dead. But ultimately, teachers and students alike shrugged off their suspicions and accepted him for what he said he was: a 15-year-old boy.

Brandon Lee befriended a couple of loners in his school, imparting his oddly extensive knowledge of ’80s music and offering his help with their homework. His social capital began to rise when he offered to drive classmates around in his car, despite the fact that he was supposedly too young to have a license — the age limit must be lower in Canada, they surmised.

Eventually, though, Brandon Lee was unmasked.

“Brandon Lee” in the school’s production of “South Pacific.”Shutterstock

Lee would spend two years at Bearsden and get accepted into Scotland’s University of Dundee before it was revealed in 1995 that all was not what it seemed.

Lee’s real name was Brian MacKinnon, and he was in his early 30s.The media, at the time, relayed an account of Lee getting caught with a fake passport on a trip with Bearsden classmates, but his travel companions maintain it was much less dramatic than that, with a teacher finally noticing his resemblance to a student in a late-1970s yearbook.

He was desperate to become a doctor, which his late father had always wanted for him. After his first time around at Bearsden, he’d gotten into medical school at Scotland’s University of Dundee, but flunked out in his first year — and the school didn’t accept students who were over 30.

So he’d hatched an extravagant plan to take a second stab at it, enrolling at Bearsden again at 30, a ruse that was foiled when his story went public in the press.

In one of the most confounding details, MacKinnon even had some of the same teachers as his first time around. But he looked so different, the instructors said — particularly his hair, which he’d permed as part of his disguise — that no one recognized him.

In recent years, the eccentric and reclusive MacKinnon has leaned into conspiracy theorizing. He published a memoir, called “Rhesus Negative,” in 2016, in which he claimed he’d been injected with a virus during his first stint in medical school that made him so ill he had to drop out. And he wrote that he’d “survived an assassination attempt from a hit squad” after his secret was outed.

The film also implies, via MacKinnon’s unwillingness to appear on camera in his interview, that he might be mulling yet another change to his appearance and a third try at getting into med school.

But McLeod has said he thinks MacKinnon wants to move forward with his life and improve his image in the public eye. In Scotland, he’s known as a famous hoaxster.

But MacKinnon maintains his reasons for the ruse were honorable; he still believes he was meant to be a doctor. As McLeod told the Scotsman, “He wants people to know his story. I think he hopes that things can change for him if he gets his story out by whatever means he can.”