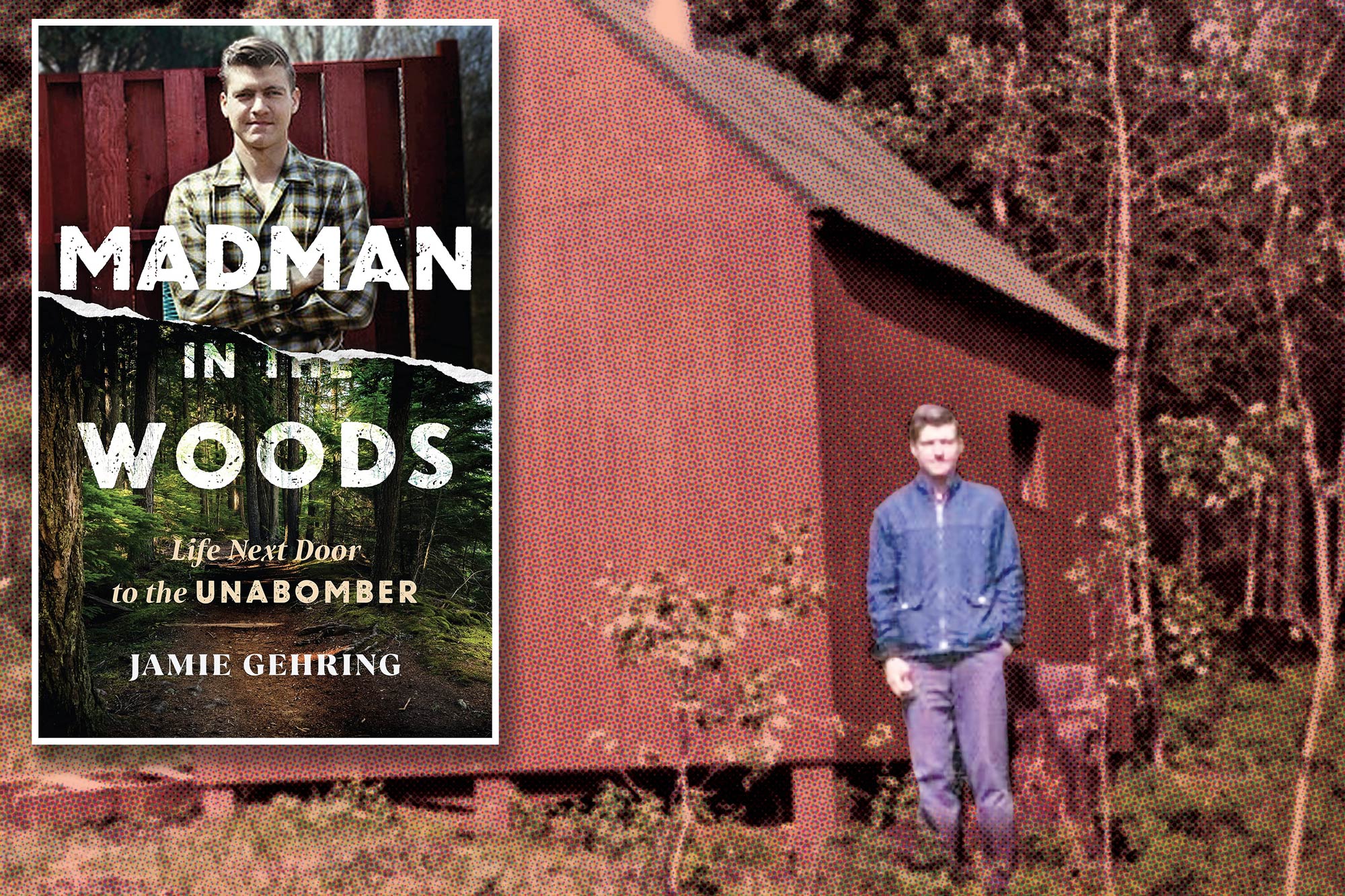 They called him “Teddy the Hermit.”

In the early 1980s, the Gehring family lived down a dirt road four miles into the forest outside Lincoln, Mont. Their only neighbor was just a quarter-mile away, a quiet recluse living in a cabin without running water or electricity. The woodsman would occasionally do odd jobs at their place, bartering for cash or supplies. He usually stayed for dinner and a game of pinochle, often bringing handmade gifts of hand-carved cups or painted rocks for their infant daughter, Jamie. Some nights he would rock the baby girl to sleep in his arms on the porch.

When the FBI came knocking on the Gehring’s door in 1996, they called him the Unabomber. He was Ted Kaczynski, the longest-tenured domestic terrorist in American history.

“You’re not supposed to grow up next to a murderer, but I did,” writes a grown Jamie Gehring in her “Madman in the Woods: Life Next Door to the Unabomber” (Diversion Books), out now.

Kaczynski was an Illinois native with a 167 IQ who went to Harvard in 1958 — at just 16 years old. He earned a master’s degree and doctorate in mathematics at the University of Michigan before becoming, at 25, the youngest-ever professor at UC Berkeley. He made no waves on campus other than being somewhat unpopular with his students, who found him nervous and unapproachable. But by the end of the 1960s, Kaczynski was ready to leave it all behind.

Author Jamie Gehring, pictured as a baby with her mom and dad, writes that she was rocked to sleep by Ted Kaczynski after he moved in next door.Courtesy of Jamie Gehring/Madman in the Woods

In 1971 he moved into the Montana woods, buying 1.4 acres of the more than 200 owned by the Gehrings. Ted lived quietly for the next 25 years, surviving on the vegetables he grew, the plants he foraged, and the animals he hunted. If he bathed, it was in the stream running through his property. In his journals Kaczynski wrote that those woods were a paradise, “the best and most beautiful and isolated place.”

But during that same time period, he was moonlighting as the Unabomber: From 1978 to 1995, inside his bare cabin Ted Kaczynski fashioned 16 increasingly sophisticated bombs, mailing them out from different Western towns. He would kill a total of three people and injure 22, targeting university professors, computer-store owners, and executives in advertising and forestry. In 1979 he unsuccessfully tried to blast American Airlines flight 444 from the sky — a jetliner filled with 72 innocent passengers — by mailing a bomb he knew would end up in its cargo hold.

In 1971, Kaczynski moved into the Montana woods, buying 1.4 acres of land owned by the Gehrings.Courtesy of Jamie Gehring/Madman in the Woods

His motivation? As Gehring describes it, “the Unabomber wanted to call attention to the destruction that technology and industry create. His ultimate goal was a revolution that would . . . help restore a lifestyle that was more primitive in nature.”

Or, as Kaczynski wrote, “It was simply anger and revenge, and I was going to strike back.”

Along with his well-documented hatred of technology, Kaczynski’s “anger” likely resulted from his failures with women. He had one girlfriend only, briefly in high school.

Kaczynski (center with parents) was an Illinois native who went to Harvard in 1958 — at just 16 years old.Courtesy of Jamie Gehring/Madman in the Woods

“I am tormented by bitter regret at never having had the opportunity to experience the love of a woman,” he wrote to his mother.

His final interactions with civilization came in 1978, when Ted briefly worked for his brother, David, at an Illinois engineering company. Calling himself “sex-starved,” Kaczynski tried to woo a female supervisor named Ellen. She initially dated but then rebuffed him, leading to David firing Ted over a mocking limerick he posted across the factory. (It involved mention of a “certain young lady named Ellen/whose fanny is very repelling.”)

Kaczynski’s first bomb was sent earlier that year, and he would send others until the FBI captured him 17 years later. None of Lincoln’s locals ever suspected Kaczynski of such heinous crimes, though. Most found him disciplined and principled and respected his dedication to living off-the-grid; many Montanans knew how to live off the land, but almost none were as fully self-sufficient as Ted. He was a quiet man biking around town, known to randomly deliver gifts to children in neighboring Great Falls. One Lincoln storekeeper considered him “gentlemanly” and an “innocent,” while a boy at the Lincoln library called him “Uncle Ted.”

Kaczynski killed at least six dogs in Montana, including one belonging to the Gehring family (above).

“He looked and smelled like a wild man,” Jamie Gehring quotes her mother as saying. “But I would never, ever have guessed [Teddy] was capable of the vicious crimes he committed.”

From 1978 to 1985, Kaczynski sent explosive packages to professors at Northwestern and Vanderbilt, the University of Utah, and UC Berkeley, not to mention targeting American flight 444 and the airline’s president. He didn’t ultimately kill anyone with those deliveries, but it wasn’t for lack of trying. He’d also jerry-rigged himself a .22 caliber pistol by hand, which he hoped to use as a “homicide weapon.”

In his journals, Kaczynski admitted to vandalizing a nearby vacation home because of the noise its recreational vehicles made, but when local law enforcement briefly suspected him, another Montanan refuted that.

“There is no way Ted could have done that,” the man told police.

The road from Kaczynski’s cabin to the mill.Courtesy of Jamie Gehring/Madman in the Woods

“Who says crime doesn’t pay?” Ted crowed about the incident in his journal. “I feel very good about this.”

After his arrest, the FBI would discover numerous local crimes no one knew he had perpetrated. Kaczynski had sabotaged area mines, poured sugar into random compressor tanks and stole numerous items from the town dump and local backyards (mostly used to build bombs). One day, he used a hunting rifle to take pot shots at a helicopter buzzing his land. Another time, he chopped down a utility pole holding a pay phone Kaczynski believed was stealing his change.

But no one in Lincoln feared Kaczynski, especially the Gehrings. By the mid-’80s, Ted became isolated from the family. He mostly rejected their offers of rides into town, and when he did accept, he only talked of the weather.

FBI agents bust Ted Kaczynski in Lincoln, Mont., in 1996, after a years-long deadly campaign in which the now-federal inmate built and mailed 16 bombs, killing three people and wounding 22.Courtesy of Jamie Gehring/Madman in the Woods

The Gehrings considered “Teddy the Hermit” so harmless that Jamie’s father, Butch, frequently faux-threatened him. Whenever Kaczynski complained to Butch about the noise coming from the Gehring sawmill, or allowing lumber companies access to his lands, Butch told Ted he would cut down his favorite Ponderosa pine.

“Don’t make me get the chainsaw,” Butch teased.

’I had no idea I just pissed off the Unabomber. That’s kind of a scary scenario.’Wendy Gehring, recalling a run-in with Ted Kaczynski

Butch believed they were friendly neighbors, but Kaczynski actually hated him. One night, he sabotaged the family’s sawmill by ruining the fuel system, explaining why in his journal.

“There is a guy who’s a neighbor of mine, Butch Gehring . . . he’s a real bastard.  My intention was to put him out of business.”

Inside the cabin of Kaczynski, a quiet recluse who lived without running water or electricity.Courtesy of Jamie Gehring/Madman in the Woods

After Jamie’s parents divorced when she was 3, Butch moved his new wife Wendy into his home. Wendy was often scantily-clad, and she frequently found a scruffy Ted peering through the windows, supposedly to find out the time. “Time to get a watch!” she barked at him one day, exasperated.

“I had no idea I had just pissed off the Unabomber,” Wendy later remarked to Gehring. “That’s kind of a scary scenario.”

It was scarier than she could have possibly known. One afternoon, Kaczynski eyeballed Wendy and her infant daughter through the scope of his hunting rifle, alternating back and forth between the two. “It would be easy to take the little bitch out,” he wrote. “But then the big bitch would get away. Or if I shoot the big bitch, then the little bitch would be left on the hill.”

Kaczynski jerry-rigged himself a .22 caliber pistol by hand, which he hoped to use as a “homicide weapon.” Courtesy of Jamie Gehring/Madman in the Woods

By then, the Unabomber’s bombs were becoming deadly; he had been studying bomb-making, and had become more masterful at it. In 1985, he killed a Sacramento computer store owner via mail bomb, while in 1994 his handiwork murdered an advertising executive (Ted didn’t approve of his company’s work for Exxon after the Valdez disaster) and in 1995, a timber industry lobbyist.

Maybe the only Lincoln locals who recognized Kaczynski’s true nature were the town dogs, who universally bristled at him, and with good reason. While Kaczynski was delivering bombs across America during his time in Lincoln, he was also killing canines. He killed at least six in Montana, shooting one and poisoning five others. One of the dead pets belonged to the Gehrings, Wiley, who never liked Ted. Kaczynski didn’t just kill the dog, but tortured him with just enough strychnine to ensure a long, painful death. “The same person my family welcomed into their home and helped during tough winters had maliciously poisoned our dog,” writes Gehring, who read about his cruelty toward Wiley (and all his other local crimes) only after his journals were released following his arrest.

“You’re not supposed to grow up next to a murderer, but I did,” writes Jamie Gehring of the loner nicknamed “Uncle Ted” who lived for decades in a cabin near her family’s Montana property.Courtesy of Jamie Gehring

Despite the soft spot he held for her as a child, the Unabomber would eventually target Jamie herself. Along with numerous other sportsmen, Jamie and her uncle would ride motorcycles through the land near Ted Kaczynski’s cabin, making a ruckus he found “absolutely intolerable.” Kaczynski tied neck-high razor wire between trees on his property, apparently hoping to decapitate a rider speeding past. It didn’t kill anyone, but the malicious intent was there, nonetheless.

In 1995, a year before his arrest, a teenaged Gehring nearly ran into the Unabomber in the woods while on her bike. He was gaunt, his eyes bulging, the kindness Jamie remembered from her childhood replaced by a “visceral anger.”

“For the first time, he truly terrified me,” she writes. “There was now a madman in my woods.”

While the Unabomber was the subject of the FBI’s longest and most-expensive investigation, he was the one who outed himself as the culprit. In a 1995 anonymous letter to The New York Times, he promised to stop the bombing if someone published his essay “Industrial Society and Its Future.” Ted was apprehended and sentenced to 8 life terms. He’s been in the supermax prison in Florence, Colorado, ever since, until being transferred in 2021 to the federal medical center in Butner, North Carolina, where the Unabomber, now 79, is being treated for undisclosed health reasons.

As for all the death and destruction he wreaked, Ted “the Unabomber” Kaczynski said it was simply the cost of taking a stand.

“I am still plenty angry,” he wrote in a journal well into his murderous career, “but the difference is that I am now able to strike back . . . I am definitely glad to have done what I have.”

What to know and how to watch
Gabrielle Union Praises Another Important Feminine Figure: Karine Jean-Pierre
Comment