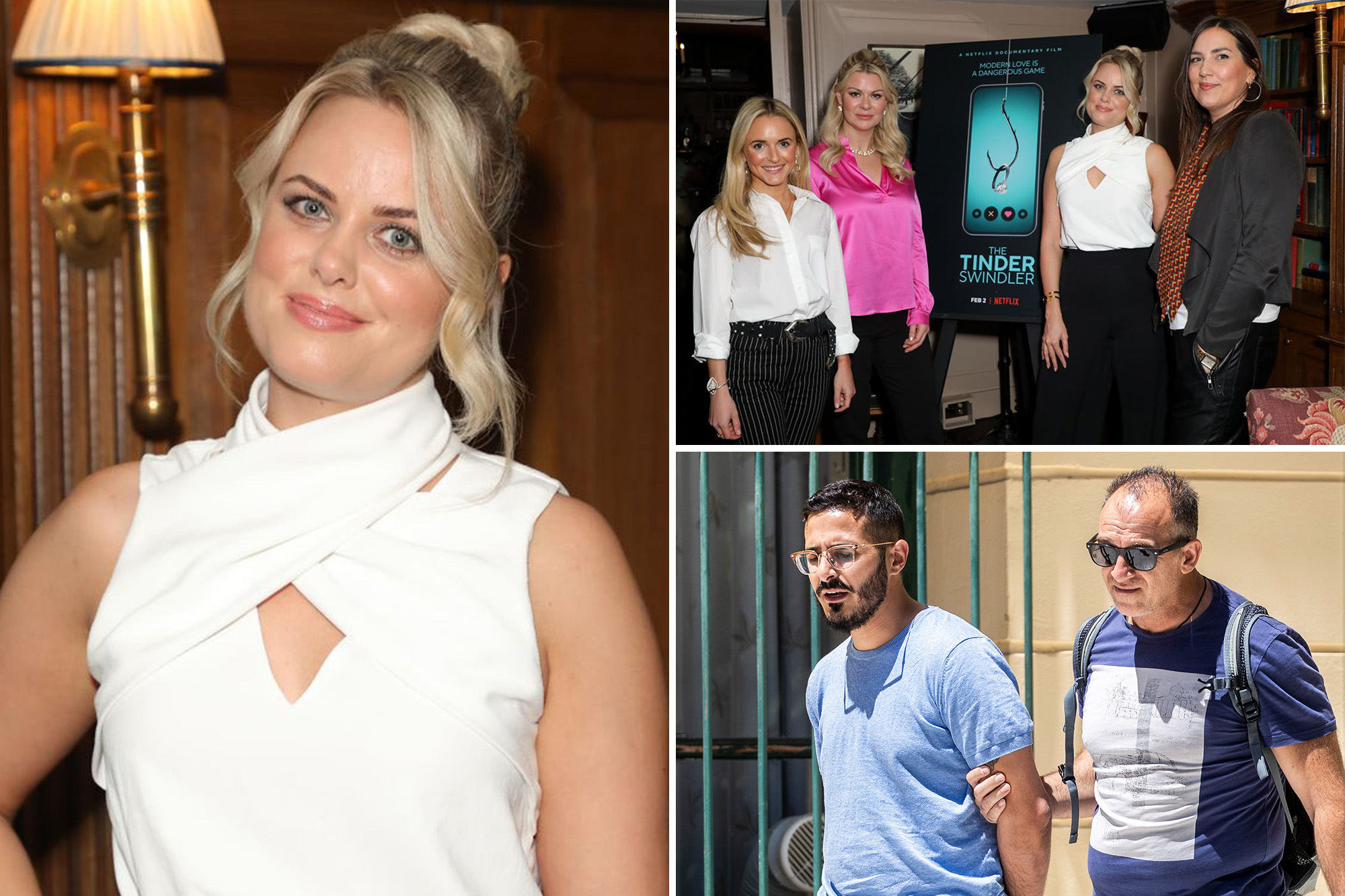 From posing as a secret agent to pretending he ran a diamond company, a new Netflix documentary claims Simon Leviev groomed women he met online – before conning them out of a staggering $10 million.

Cecilie Fjellhøy saw the lorry on the opposite carriageway – and thought about crashing her car into it.

Suicidal and in £185,000 of debt, she was in the depths of a breakdown after splitting with her boyfriend of six months, Simon Leviev.

“I felt like my life was over and I didn’t want to go on,” she says.

Cecilie, a 33-year-old UX (user experience) designer from Norway who now lives in west London, had just discovered that the millionaire diamond dealer she’d met on Tinder and fallen in love with was actually a suspected con artist who had scammed her out of $251,000

Her sensational story features in new Netflix documentary The Tinder Swindler, out next month.

Directed by Felicity Morris, who produced the acclaimed true-crime series Don’t F**k With Cats, it alleges that for at least seven years, Leviev, now 31, groomed victims he’d met on Tinder by wowing them with his flashy life of designer clothes and supercars on Instagram.

Once he had women under his spell, the documentary claims, he’d pretend that powerful enemies had frozen his bank accounts and encourage women to send him their savings or to take out credit cards and loans, conning his victims out of over $10 million.

“The women we filmed with were using Tinder to genuinely find love, which resonates with all of us,” Felicity tells Fabulous.

“Everyone has an internet dating horror story, and Tinder was the perfect hunting ground for Leviev – you’re putting yourself out there, and he knew that.

”These women just unwittingly swiped right on the wrong guy.”

Cecilie matched with Israeli Leviev in January 2018, a few months after moving to London. He described himself as a  globe-trotting businessman and his Instagram account showed him on private jets and in helicopters.

When they met for coffee that month in the five-star Four Seasons Hotel in London, Cecilie admits he had an instant magnetism.

Accompanied by his “bodyguard”, Leviev told her he was CEO of a diamond company.

During that first date, he asked Cecilie to join him on a private jet to Bulgaria where he had a meeting.

On the spur of the moment, she agreed.

“Simon has an aura about him, a real confidence,” she recalls.

“I had no reason not to believe him.”

Simon Leviev threatened Pernilla during a phone call, saying she would be paying for the rest of her life.SIMON LEVIEV/FACEBOOK

He whisked her off to Sofia, and they spent the night together, during which Cecilie noticed scars on his back.

He told her he had been jailed in South Africa after business associates framed him, and had been the victim of antisemitic attacks.

“He opened up to me,” says Cecilie.

“He was very vulnerable.”

But it was a cynical ploy.

“He knew exactly what I needed at that point in my life.

”I had just moved to London, I didn’t have a big friendship circle and he gave me the attention I needed.”

Back in London, Leviev sent Cecilie 100 red roses, and they met in Oslo twice over the next few weeks while she was visiting family.

The relationship moved fast and the couple spoke several times a day.

Leviev explained that a £51million deal he was trying to put together had put him in danger because of shady business enemies and it was too risky for him to travel back to London.

Cecilie believed Leviev when, six weeks after their first date, he sent her a voice memo saying that his security team had advised him to cancel his credit cards as his enemies were tracking them.

He asked her to get an American Express card and link it to his account so he could travel to close the deal.

“I was in a constant state of worry,” she says.

“People say I was stupid, but I truly believed he was in danger.”

Picture taken on July 1, 2019 shows the so-called “Tinder swindler” (left) as he is expelled from the city of Athens, Greece. AFP via Getty Images

Over the following weeks, Leviev ratcheted up the pressure, promising Cecilie that once the deal was done, they’d live happily ever after, encouraging her to house-hunt for a rental property for them, with a $14,900-a-month budget.

Three months in, Cecilie says Leviev claimed he’d been attacked, sending photos from the back of an ambulance.

As his “security situation” worsened, Cecilie says she took out an £18,500 loan at his request and flew to the Netherlands to give Leviev the cash.

“The pressure I was under cannot be described,” she says.

Throughout the spring of 2018, Leviev traveled to Spain, France, Austria, Switzerland and Italy, mainly on Cecilie’s account.

Just 13 weeks after their first date, her debt from loans and credit cards exceeded $251,000.

Frightened and exhausted, Cecilie says she finally realized she’d been duped after her bank in London didn’t recognize a cheque for $501,000 that Leviev had given her.

Nine creditors were chasing her when she called the American Express helpline, terrified she’d be jailed for allowing someone else to use her card.

When investigators from the company saw photographs of Leviev, they confirmed that he was being investigated for conducting the same scam on other victims.

Distraught, Cecilie returned to her family in Norway and blocked Leviev.

She reported the case to police, who said little could be done as she had willingly taken on the debt.

Discovering he’d been blocked, Leviev called her from an unknown number and left a chilling message, saying: “Watch out, because with every action there will be a reaction.”

The threat was reported, but the police did nothing.

“Everything was a lie,” she says.

“And that’s when I almost crashed my car, feeling suicidal.”

She discovered that he’d been sentenced to two years in prison in Finland in 2016 for embezzling $226,000 from three women.

He was released in March 2017, and was deported to Israel – where he was wanted on cheque fraud charges.

Cecilie Fjellhøy attends a special UK screening of ‘The Tinder Swindler’, ahead of its launch on the 2nd February on Netflix, at Soho House on February 1, 2022 in London, England. Dave Benett/Getty Images for Net

In late 2018, Cecilie took her story to Norwegian newspaper VG.

Reporters traced Leviev’s family home to a suburb of Tel Aviv, where his mother said she hadn’t spoken to him since he was 18.

They discovered he had used several aliases and had been charged with theft, forgery and fraud in 2011, after stealing checkbooks, but fled and assumed a new identity.

Reporters also noticed that Leviev used one of Cecilie’s credit cards to book flights for a woman in Stockholm named Pernilla Sjöholm, 35, who they traced through social media.

“I met him in March 2018,” Pernilla says – just two months after he had first met Cecilie.

“I had just separated from my fiancé of almost eight years, and Leviev was one of the first people I met on Tinder.”

Over the following months, they met up in Amsterdam, Stockholm, Mykonos and Rome.

At the time, Pernilla was wealthy, having made money through property.

“He used me like a guidebook, asking me opinions on clothes and places to go.”

Having convinced Pernilla of his fake identity, she says Leviev began the requests for money in November 2018.

“He said he was under threat and couldn’t trust anyone but me.”

Pernilla claims she loaned him savings of $33,965 and paid for several flights.

Leviev promised to repay her, then claimed his accounts had been frozen by his enemies.

Instead he offered an expensive watch as payment.

That’s when journalists from VG made contact with her via email.

“I couldn’t believe the person I thought I knew could do such a thing.

Picture taken on July 1, 2019 shows the so-called “Tinder swindler” (left) as he is expelled from the city of Athens, Greece.AFP via Getty Images

”It was like a friend had died,” says Pernilla.

She reported the fraud to Swedish police, who advised her to keep up the pretense with Leviev, who she’d arranged to meet in Munich to get the watch – which turned out to be a fake.

Police were unable to get an international arrest warrant in time, so Pernilla went to meet him with undercover journalists from VG, who photographed him.

At the newspaper offices, she confronted Leviev on the phone before publication.

In a recording of the call, he threatens her, saying: “If you double-cross me, you will pay for the rest of your life.”

Pernilla told him: “I am paying for it.”

Published in February 2019, the VG story encouraged several other victims to come forward.

It was claimed that he had posed as a secret agent, a pilot, an arms dealer and an heir to an Israeli airline, and he had been reported to police in at least seven countries, including the UK.

Felicity explains: “There are many other victims we spoke to but who didn’t want to go on camera.

”They feared that by speaking out, they’d be victim-shamed, and indeed, when the story came out in VG, Cecilie and Pernilla were hounded by people online calling them gold-diggers, naive and blaming them.

”That reaction is what men like Leviev rely upon so that they can keep operating in the shadows.”

Eventually, in October 2019, Leviev was arrested in Greece having booked a flight using a fake passport.

He was extradited to Israel where, that December, he was convicted of the historic fraud charges and sentenced to 15 months in prison and ordered to pay his victims $42,111 in compensation and a fine of $5,700.

The documentary claims Leviev pretended that powerful enemies had frozen his bank accounts and encouraged women to send him their savings or to take out credit cards and loans.Dave Benett/Getty Images for Net

But within five months, Leviev was released, and he was still living in Israel when Fabulous went to press.

To date, he’s not faced convictions for his alleged scams on Cecilie, Pernilla or any of the other victims.

He denies doing anything wrong, and is threatening lawsuits against Netflix and VG.

Global exposure has done little to deter Leviev, who has continued to be active on Tinder and Instagram, where his profile is now set to private.

He has since had a new girlfriend, Mona*, who when contacted by Fabulous, claimed they had recently split but remained friends.

She maintained that the story was all “one big lie,” and that Leviev was “the greatest man I ever knew,” claiming that he had lavished over $3.4 million worth of gifts on her, including a $339,650 car.

It has not been so easy for his alleged victims to move on.

Cecilie Fjellhøy isn’t the only one who fell for his tricks.Instagram/@cecilie_

“The scam affected my confidence. I’ve always been good at business and suddenly I question my judgement,” says Pernilla.

Cecilie continues to suffer, too.

After psychiatric treatment and a traumatic legal case, she filed for bankruptcy in the UK but is still being pursued by Norwegian banks.

She has now set up a charity called Action:Reaction, which aims to offer psychological support to fraud victims.

While Leviev is a free man for now, it is hoped that lawsuits lodged by the women, and renewed pressure on law enforcement agencies to act, may finally spell the end for the Tinder Swindler.

“I hope that this film exposes him on a whole new level and acts as a reckoning for him and any others like him,” says Felicity.

“Truly understanding what these women have been through made me determined to make a film that would expose Leviev for who he really is to a global audience – and act as justice for them.”

The Tinder Swindler premieres on Netflix on February 2.

This story originally appeared on The Sun and was reproduced here with permission.