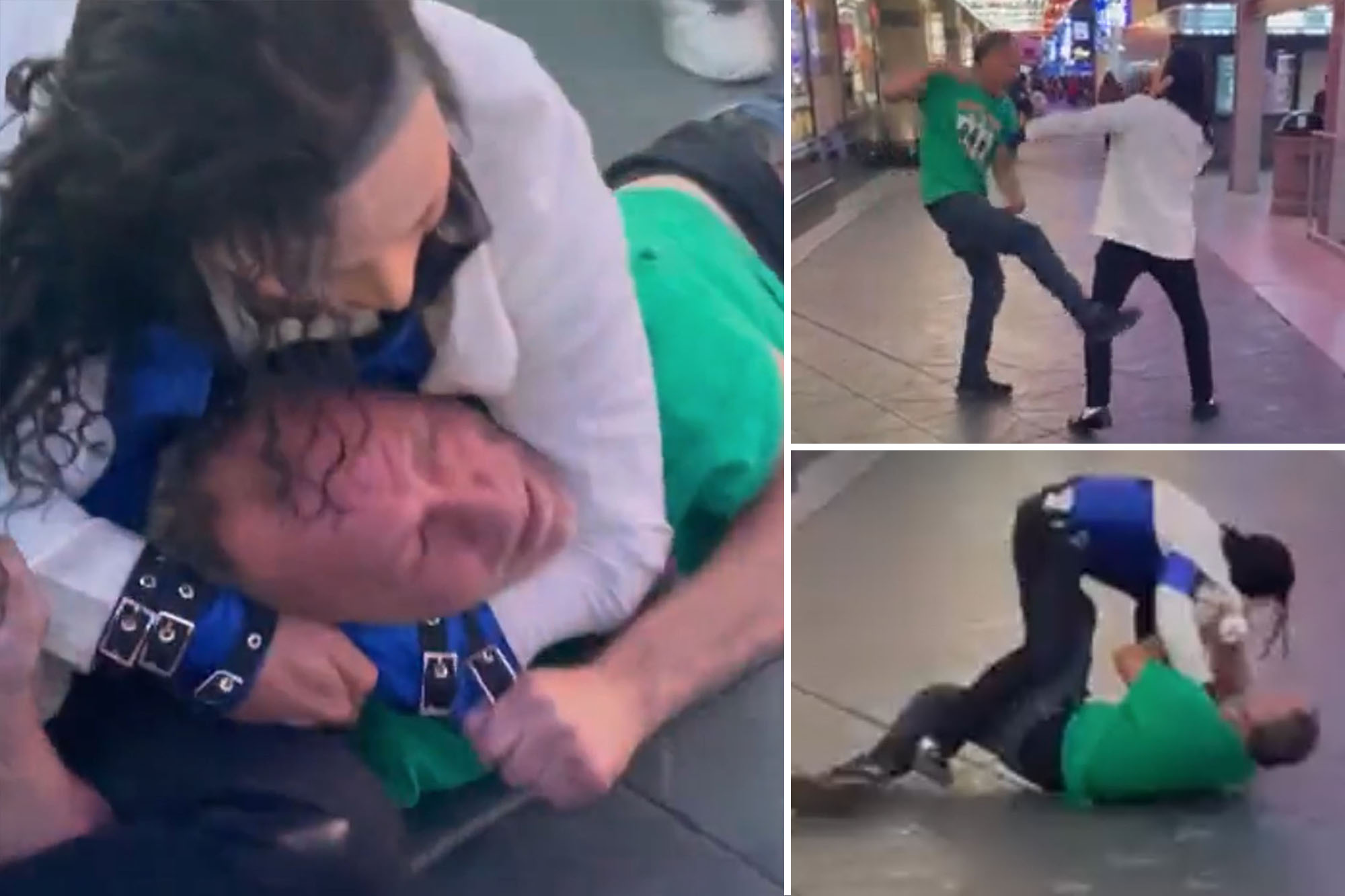 You’ve been struck by a smooth criminal.

A Michael Jackson impersonator named Santana Jackson brought new meaning to “beat it” after epically choking out a belligerent man with a sleeper hold in Las Vegas. A video of fake MJ’s MMA-style whooping currently boasts 1.6 million views on Twitter.

“WELCOME TO FREEMONT STREET !! hee hee,” reads the caption to the comical clip, which was filmed on the gambling mecca’s legendary Fremont Street.

Santana Jackson, a popular Michael Jackson tribute artist and pro wrestler, has since posted about the incident on his Instagram. He explained that the ruckus began after a “guy came out of nowhere and started hitting” him while he was performing, adding that he had “to put him down for his own good.”

Jackson proved why you don’t “Wanna Be Startin’ Somethin’” with him.

The clip begins with an older man in a green shirt, which ironically sports the tagline “Can’t Fix Stupid,” squaring off with the white-clad King of Pop-pelganger on the busy strip. He throws a couple of windmill punches and a lackadaisical leg attack, only to have Jackson sweep him to the ground with an expertly timed “Billie Jean kick.”

Once the tussle hits the floor, the “Bad” singer’s facsimile quickly assumes control. He eventually clamps on a bulldog choke — a headlock-style submission hold — causing the assailant to go to sleep as the crowd cries, “He’s out.”

At this point, the camera begins to get shaky; however, bystanders eventually disentangle the combatants, whereupon the loser stands up and tries to walk off the walloping.

Needless to say, the wannabe Gloved One’s beatdown made waves online, with many referencing his legendary songs.

“Why’d he wanna be starting something?” joked one commenter, while another quipped, “MJ apparently did ‘fix stupid,’” in reference to the alleged assailant’s shirt.

“Damn, Michael wasn’t kidding when he said he was bad,” said another of Jackson’s pugilistic expertise.

Another social media gawker mused, “If ever got choked out by a Michael Jackson impersonator I think I might move countries.”

At one point, the King of Pop-pelganger even appeared to deploy Michael Jackson’s signature kick.Twitter / Deegan Marcus

“Michael Jackson Impersonator 10-8,” gushed @philthemmadude. “Note how he stays calm while taking his opponent down and sinking in the choke. Beautiful stuff.”

Fightful.com reporter Sean Ross Sapp exclaimed that the performer executed the “LeBell Lock,” a headlock-adjacent move named after legendary martial artist Gene LeBell, which has since been popularized by WWE competitor Daniel Bryan.

Brazilian jiujitsu icon Rener Gracie even posted a humorous breakdown of the match on his YouTube channel.

The assailant lived up to his T-shirt slogan.Twitter / Deegan Marcus

Despite the fanfare, Jackson clarified that he was “not trying to hurt this guy just trying to restrain him from swinging at me.”

“Please know I don’t think fighting is the answer so try to avoid a fight if u can. Stay safe,” the singer added.

Jackson performs as part of the MJ Live Show, a Las Vegas-based tribute concert to the late pop star. Per the organization’s website, he is one of the globe’s “top Michael Jackson tribute artists” and is “committed to bringing the magic of Michael Jackson to audiences around the world.”