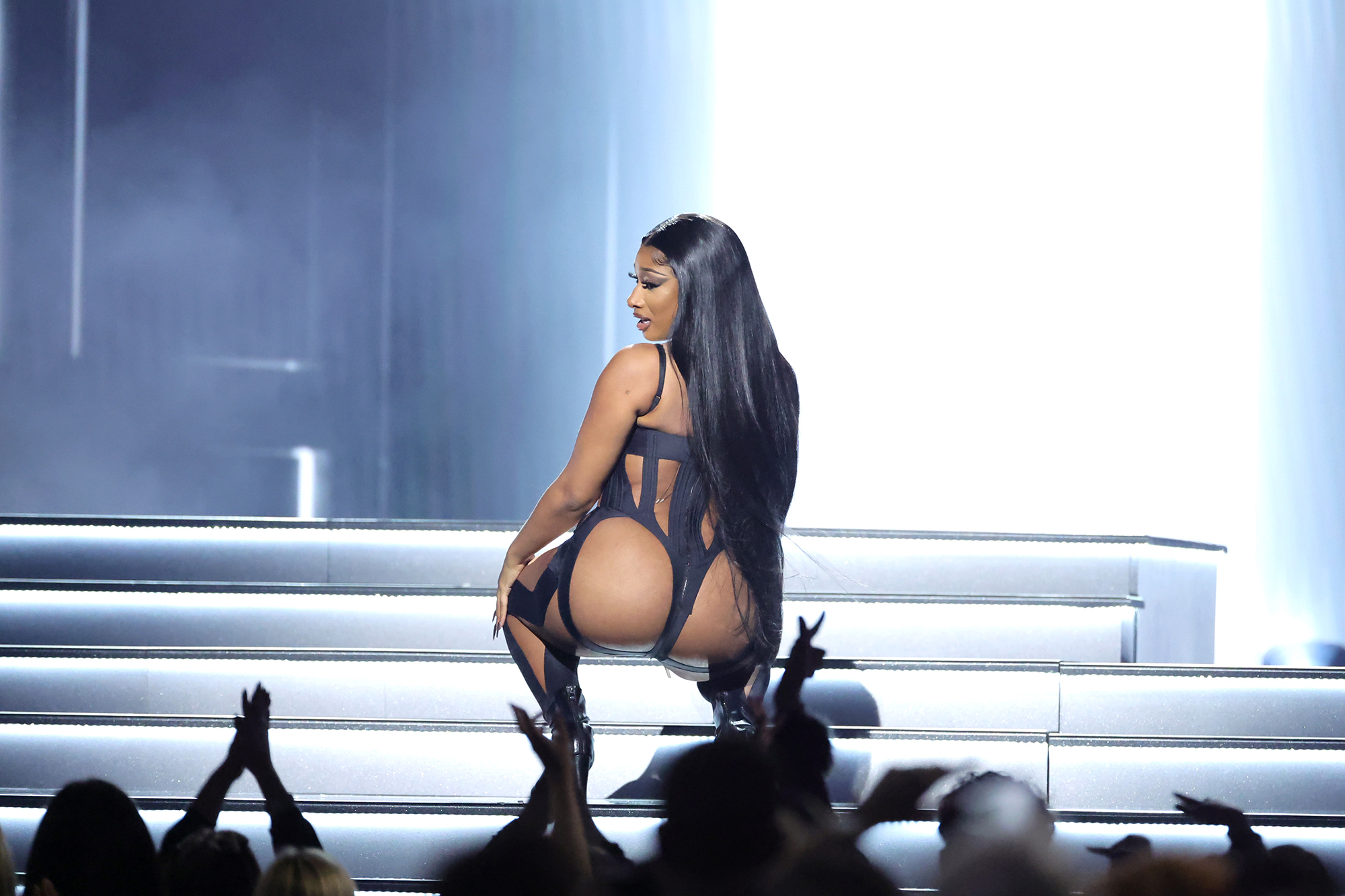 She gave “Something for Thee Hotties.”

Rapper Megan Thee Stallion had fans drooling thanks to her 2022 Billboard performance in which she showcased her twerking talents while rocking a scintillating one-piece. The artist had just won the Billboard Award for top rap female artist at the ceremony, which was held at the MGM Grand Garden Arena in Las Vegas on Sunday.

The 27-year-old “Body” singer — real name Megan Jovon Ruth Pete — kicked off the unbridled performance with a racy rendition of her new girl-power anthem “Plan B.” During the hot number, she sported a form-fitting one-piece with geometric cutouts that left little to the imagination. An itsy-bitsy back thong silhouette and sleek black lace-up boots completed the smoldering ensemble — which was all custom Mugler, according to a recent Instagram post from the singer.

She kicked off her performance with a racy rendition of her new girl-power anthem “Plan B.”Getty Images

Interestingly, many fans have speculated that “Plan B” was a diss track aimed at her ex, Tory Lanez, who Megan Thee Stallion said shot her in the foot in 2020. However, the Grammy winner wrote on Twitter that she was “just venting Abt experiences I’ve had in relationships I’ve been in the past.”

The performance resonated with female fans with one supporter tweeting, “When megan thee stallion said ‘poppin plan b’s cause i ain’t planned to be stuck with ya’ i think all of us girls have felt that at some point in our lives.’”

Things heated up during the Texas native’s performance of her Dua Lipa collaboration “Sweetest Pie,” in which the “WAP” collaborator was joined by backup dancers in black bodysuits and trousers while flames spouted from the stage. It was during this number that Megan Thee Stallion displayed her world-famous twerking skills, prompting a hilarious reaction from Elle King in the crowd.

Megan Thee Stallion left little to the imagination with her outfit.Getty Images

Cara Delevingne and Megan Thee Stallion posed together for photos before the event.Getty Images for MRC

Megan Thee Stallion said “Plan B” was her way of “just venting Abt experiences I’ve had in relationships I’ve been in the past.”WireImage

The “WAP” collaborator was joined by backup dancers in black bodysuits and trousers while flames spouted from the stage.Getty Images for MRC

Wanda Sykes slams ‘still traumatized’ over Will Smith slap
Manuel Garcia-Rulfo is the new ‘Lincoln Lawyer’ in Netflix series
We use cookies on our website to give you the most relevant experience by remembering your preferences and repeat visits. By clicking “Accept All”, you consent to the use of ALL the cookies. However, you may visit "Cookie Settings" to provide a controlled consent.
Cookie SettingsAccept All
Manage consent