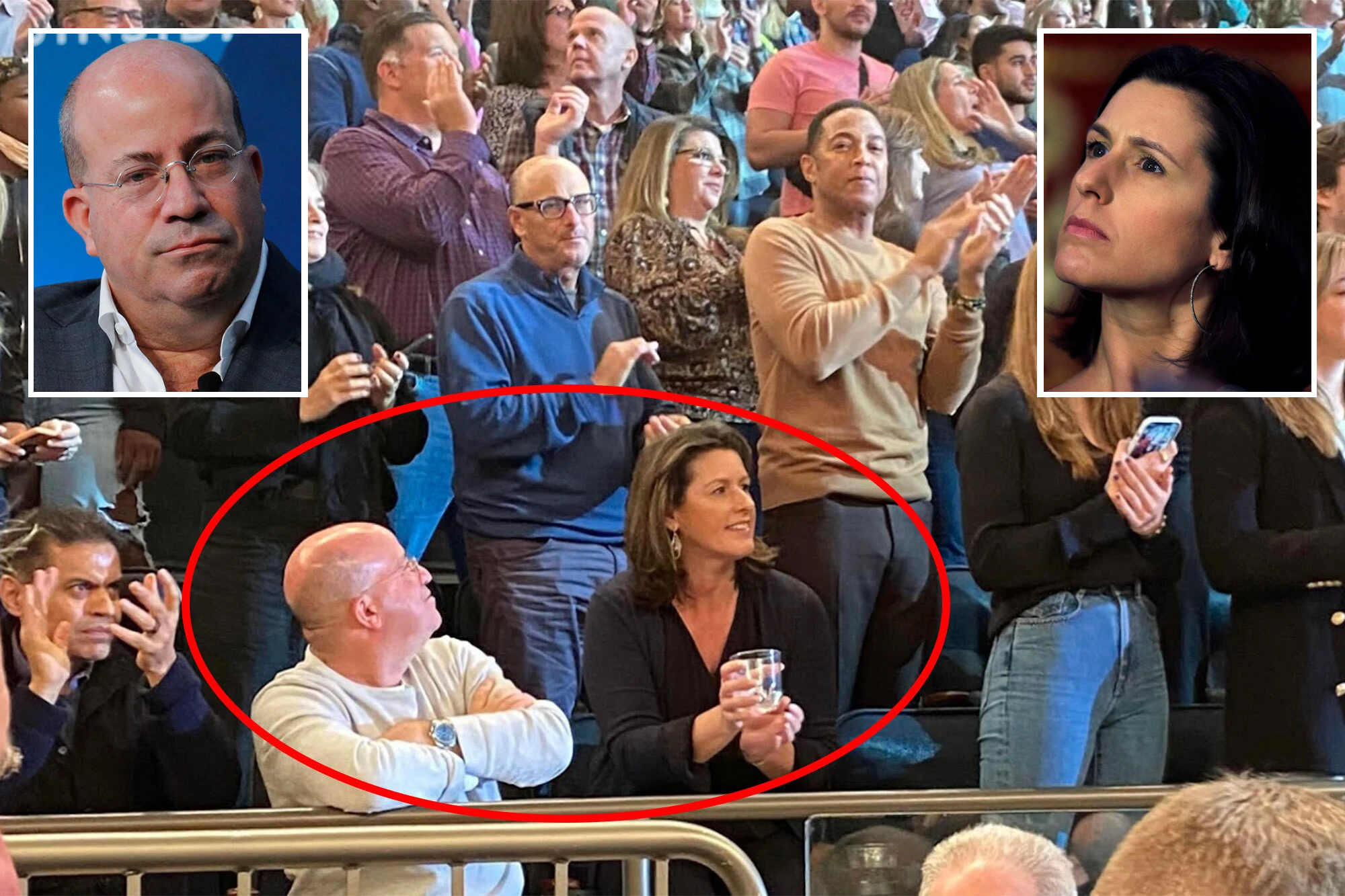 Ousted CNN boss Jeff Zucker’s affair with his colleague Allison Gollust was the “worst kept secret in TV” but they conspired to keep it out of the media for years with a web of lies, sources told the Post.

Rumors have circulated for years that CNN’s two most senior executives, who made the decision to fire anchor Chris Cuomo, have been having an affair, which played a part in ending both their marriages.

Multiple sources claim CNN president Zucker and the network’s Executive Vice President and Chief Marketing Officer Gollust have been involved in a secret romance for more than 10 years, even as they lived in the same Manhattan building on consecutive floors with their former spouses.

And as the pair took vacations together, went apartment hunting and going into each other’s hotel rooms for alleged “meetings,” Gollust has spent years lying about their affair, blasting reporters on numerous occasions for being “sexist” by suggesting she was sleeping with her boss.

The affair between Zucker and Gollust — who have worked together for 25 years — stretches back to when they both worked at NBC, according to multiple sources. TV insiders call them “the odd couple” because Gollust towers over Zucker.

Zucker was at NBC from 1986 to 2010, becoming the executive producer of “Today” then head of NBC Entertainment rising to President and CEO of NBC Universal. Gollust started at NBC in 1996, was the publicist for “Today” then became executive vice president of corporate communications at NBC Universal alongside Zucker.

She was picked by the former New York Gov. Andrew Cuomo in 2012 to serve as his communications director. Then Zucker brought her over to work with him at CNN.

“It was well known that they were sleeping together dating back to their time at NBC,” an NBC insider said. “Second to the revelation that the Pope is Catholic, this affair is the least-shocking revelation in the world.”

Zucker and Gollust have worked together for the past 25 years.REUTERS

The insider added that everyone in the TV industry is “appalled” by Gollust’s claim in a statement that their relationship “changed during COVID.”

The source added, “And the fact that they are continuing to lie about it is offensive to everybody. You lie when you are trying to cover up an affair, not admitting to it, you moron.”

Former CNN anchor Soledad O’Brien tweeted in response to Gollust’s claim, “I encourage you to google the two parties and read the details about their relationship that dates back years.

“That said, I’m sure company emails can easily determine if she’s lying in this statement. Again—It was an open secret and I haven’t even worked there for like 8 years.”

Former CNN correspondent Roland Martin also bluntly declared it was common knowledge that Gollust was in a relationship with the boss.

It was an open secret at @CNN that Jeff Zucker and Allison Golust, who he hired as head of communications, were having an affair. I was only there with them for four months in 2013 and knew. NBC folks knew when they worked together there. @katiecouric intimated that in her book! https://t.co/6ghezmFiws— rolandsmartin (@rolandsmartin) February 2, 2022

“It was an open secret at @CNN that Jeff Zucker and Allison Gollust, who he hired as head of communications, were having an affair,” he tweeted.

“I was only there with them for four months in 2013 and knew. NBC folks knew when they worked together there. @katiecouric intimated that in her book!”

Couric wrote in her book “Going There:” “I had to wonder why Jeff was angling so hard to bring Allison on board [at CNN]. She and her husband and kids had moved into the apartment right above Jeff and Caryn’s — everyone who heard about their cozy arrangement thought it was super strange.”

Couric continued in her book: “By that point, Caryn (Zucker’s ex-wife) had become a close friend and it made me really uncomfortable.”

Couric went on to detail how she was later overlooked for a job at CNN, despite supporting Zucker to become the head of the network. She added, “His first hire? Allison Gollust.”

Rumors of their tawdry affair exploded when Gollust was living at the same Upper East Side apartment building – in the apartment directly above the one where Zucker lived with his wife of 21 years Caryn, and their four children.

Gollust was married to William Hult at the time and they have two daughters. They filed for divorce in 2015, and it was finalized in 2017.

“The contention that Zucker’s romantic relationship with Allison Gollust ‘evolved’ during the COVID pandemic is absurd. They carried on the affair for years while the two occupied separate apartments at 32 E. 64th St,” a separate source said.

“Zucker would get on the elevator and visit Gollust when the coast was clear.  They didn’t even have to leave their building.  It was a perfect cover.”

Zucker and Gollust lived in the same apartment building, which some colleagues found strange.Google Maps

Another insider said, “Zucker would disappear for hours on end, but Caryn initially had no idea that the woman she was being polite to in the elevator was sleeping with her husband.

“Everyone in the building knew about it – even the doormen tried to ensure Caryn wasn’t in the elevator at the same time as Allison.“

Zucker and TV producer Caryn met while both were working at NBC, when he was executive producer of “The Today Show” and she was working at “Saturday Night Live” They married in a lavish ceremony at the Pierre Hotel in 1996.

Caryn Zucker has never commented on her ex-husband’s relationship with Allison Gollust.Getty Images

Elegant Caryn is popular on the New York social circuit and among the Upper East Side ladies who lunch.

The insider said Zucker cruelly revealed his affair to his wife of 21 years over Rosh Hashanah dinner. “The story goes that Jeff told his wife ‘I am not in love with you, I am in love with Allison.”

Then in a joint statement to Page Six in January 2018, Jeff and Caryn confirmed they were divorcing and said, “Together, we have made the difficult decision to separate, but do so as friends committed to our kids. They remain our sole focus.”

Caryn – who bought a home in Palm Beach following the divorce – has never commented on Zucker’s relationship with Gollust and didn’t return calls on Tuesday.

As they brazenly carried on their affair, Gollust joined him on a trip to Israel on March 5, 2017, where they had dinner with Andrew Cuomo and his aide Melissa DeRosa in Jerusalem at the King David Hotel.

Allison Gollust called reporters “offensive” and “sexist” when asked about her relationship with Jeff Zucker.AP

And Zucker and Gollust famously had a public lovers’ tiff at a swanky media party at The Four Seasons in 2017.

“It looked like she was reprimanding her husband or something,” laughed one baffled rival exec of the exchange.

They were seen apartment hunting in New York together in 2019. But she explained to Page Six that she was merely “helping” her boss find a new place.

After the pair had an intimate dinner with Sandra Lee in 2018, Gollust again lied to Page Six, saying via email, “I was not there ‘with’ Jeff … I was invited on my own, as was he. I assume you aren’t suggesting otherwise?”

Gollust was also centerstage at Zucker’s 54th birthday party in 2019 at the McKittrick Hotel.

In January this year, Radar Online published a story about their clandestine relationship. Gollust continued to lie, blaming fired anchor Chris Cuomo for planting the story. The relationship was likely unknown to CNN brass before the Radar article.

Following the Radar Online story, Gollust continued to deny they were in a romantic relationship.

She told reporters that claims to the contrary were “offensive” and “sexist.”

A lawyer for Cuomo denied they planted the story and that the fired anchor alerted CNN bosses about the clandestine affair.

But TV insiders say Zucker and Gollust’s affair came to light within CNN following the firing of Chris Cuomo.

One said, “Cuomo is suing CNN for a settlement, and his lawyers may have argued that Zucker and Gollust’s relationship is improper and they should not have been able to decide on the fate of his career.

“Once CNN’s lawyers were told of this, Zucker’s fate was sealed.”

A second source said Zucker was last week interviewed by an outside law firm which has been working on the investigation into Cuomo and he was grilled over his relationship with Gollust, who didn’t return numerous calls from the Post.