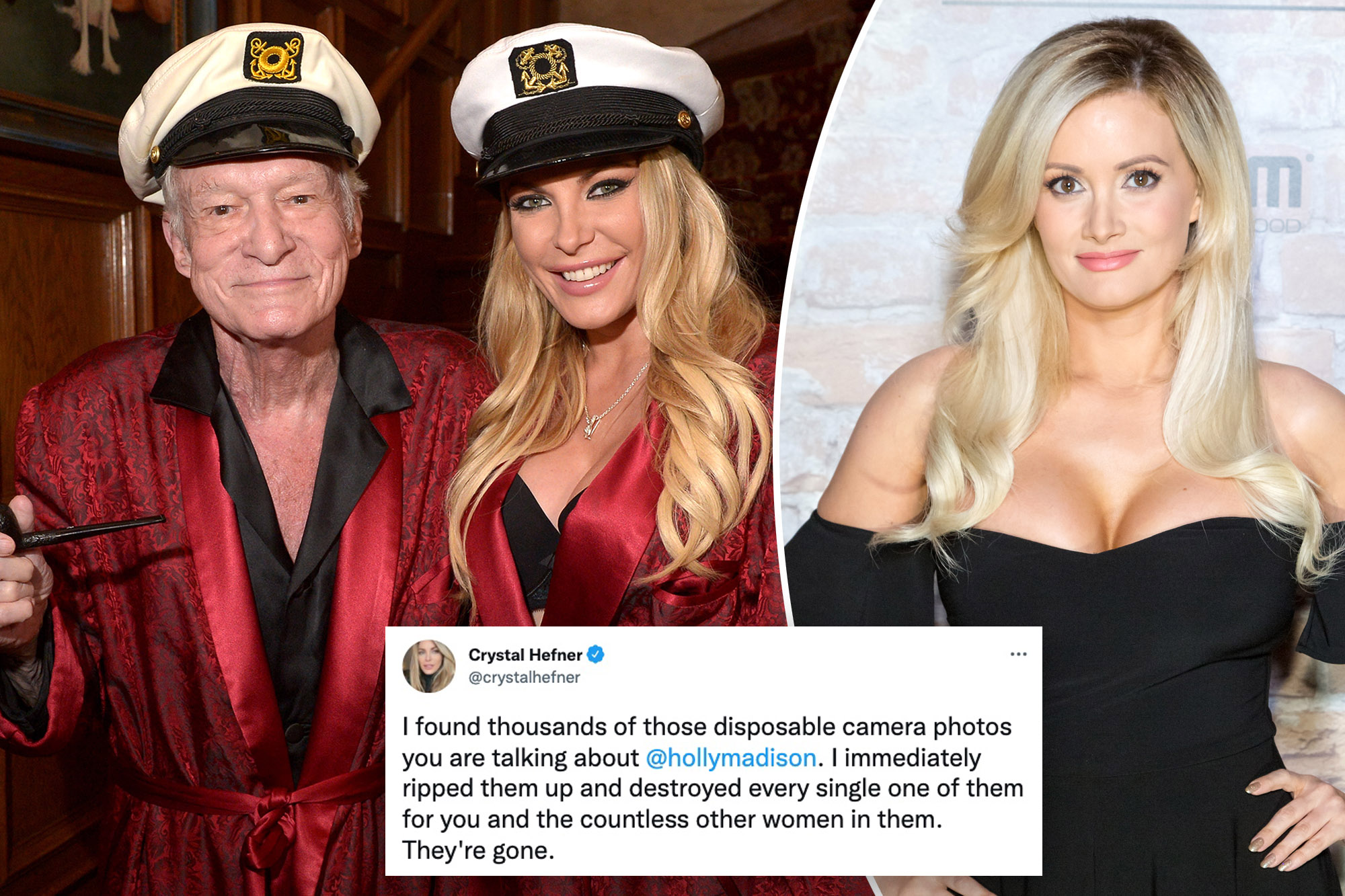 The playmate-cum-paramour’s bombshell tweet followed the Monday premiere of the 10-part A&E docuseries, “Secrets of Playboy,” which shined a spotlight on Hefner’s alleged predatory practices.

“He’s taking all kind of naked pictures of these women when we were wasted out of our minds,” lamented the 42-year-old “Girls Next Door” star. “It was just gross.”

She had previously explained in December that Hef would make “copies of the photos he took” and “hand them out to everyone who had gone out that night,” Toofab reported.

“So if you were messed up and if you were in his bathtub with your top off and some other girl is doing some sexually explicit pose on you and he took a picture of that on his disposable camera, he’d make a copy and give it to everyone that night and put it in a scrapbook,” she’d added at the time.

Crystal, 35, confirmed the concerns as valid, writing: “I found thousands of those disposable camera photos you are talking about @hollymadison.”

“I immediately ripped them up and destroyed every single one of them for you and the countless other women in them,” assured the former Playmate of the Year, who was married to Hefner from 2012 until his death at 91 in 2017. “They’re gone.”

Madison has since retweeted the message with the caption, “thank you @crystalhefner.”

Reps for Madison and Crystal Hefner have yet to respond to The Post’s request for comment.

Meanwhile, former members of the nudie mag magnate’s inner circle claim that Hefner outfitted his mansion with hidden cameras, which recorded everyone from Playmates to police officers engaging in sexually explicit and depraved acts.

Hef would then allegedly threaten to leak the damaging clips if and when anyone attempted to air his dirty laundry — of which there was allegedly mountains.

“All the guys were laughing when Linda got out of the limousine,” Masten said. “She was drunk and drugged … They got her so messed up that they made her give the German shepherd oral sex. You wanna talk about depravity? This is despicable.”

Madison analogized Hefner’s organization to a cult, claiming: “The reason I think the mansion was very cultlike, looking back on it, is because we were all kind of gaslit and expected to think of Hef as, like, this really good guy.

Playboy has since denounced the late publisher’s “abhorrent” actions in a statement.

“First and foremost, we want to say: we trust and validate women and their stories, and we strongly support the individuals who have come forward to share their experiences,” the letter began. “As a brand with sex positivity at its core, we believe safety, security and accountability are paramount, and anything less is inexcusable.”

The nudie mag firm also insisted that the Hefner family is not involved in the company, and have pledged to build “upon the aspects of our legacy that have made a positive impact, including serving as a platform for free expression and a convener of safe conversations on sex, inclusion and freedom.”

Julian Lennon is selling The Beatles memorabilia as NFTs
‘Fight Club’ ending changed in China as government censorship
We use cookies on our website to give you the most relevant experience by remembering your preferences and repeat visits. By clicking “Accept All”, you consent to the use of ALL the cookies. However, you may visit "Cookie Settings" to provide a controlled consent.
Cookie SettingsAccept All
Manage consent