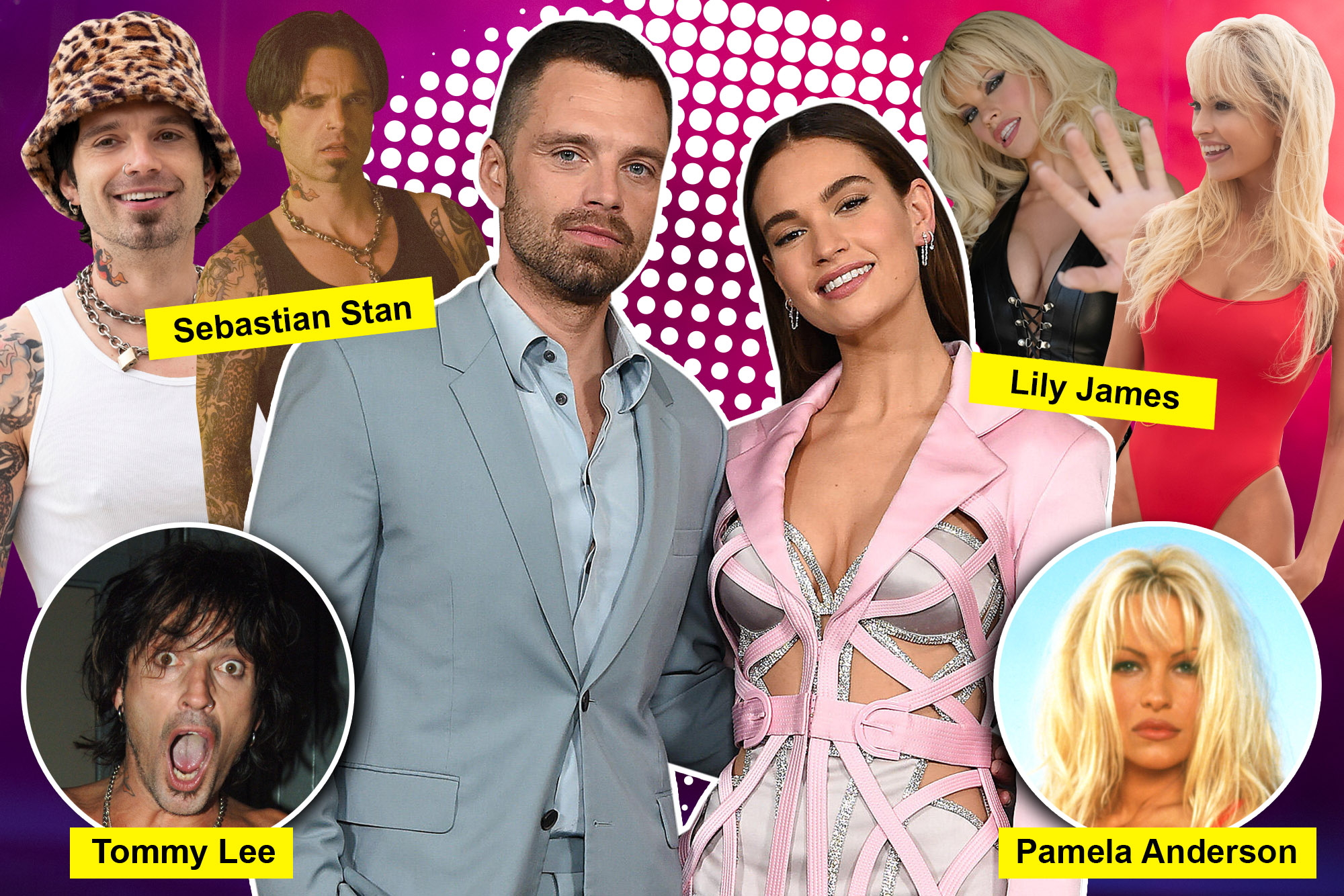 Lily James is busted. The 32-year-old actress gained fame playing an aristocratic lady on “Downtown Abbey” and went on to star in a BBC adaptation of “War and Peace.” Now, she’s undergone a dramatic transformation to play notoriously buxom “Baywatch” babe Pamela Anderson in the new Hulu series “Pam & Tommy,” out Wednesday.

“We painstakingly went back and forth and resculpted Pamela’s breasts at least three or four times in order to get them just right,” special makeup effects and prosthetics designer Jason Collins told The Post of re-creating Anderson’s key features just so for James.

His company, Autonomous FX, outfitted James and co-star Sebastian Stan, 39, who stars as Mötley Crüe rocker Tommy Lee, with well over $100,000 in prosthetics.

“It was important that the breasts didn’t look overly theatrical or distracting to the audience. We created them to tastefully reflect Pam’s beauty and Lily’s work as an actor,” said Collins, 47, of the 34 DD-sized breastplate his team made for James.

In the show, James deftly portrays Anderson as she and Lee navigate the damning twists of their 1995 sex tape robbery and distribution — which would ultimately become the world’s first-ever viral celebrity-nudes leak.

“I was so nervous that I called my spiritual advisor at 4 a.m. and got him out of bed to discuss my workload for the upcoming day,” makeup department head David Williams told The Post.

“That look is just so iconic,” added the three-time Emmy-winning makeup artist. “And I felt that this would be one of the biggest moments of my career.”

“My team and I were extremely vested in doing justice to both of these people who are very well known in the zeitgeist of America,” said Williams, who worked closely with hair department head Barry Lee Moe, 42, as well as Collins.

They knew they’d nailed just the right look for Anderson’s chest when a mesmerized member of the film crew nearly fell off the back of a truck while starting at James’ faux cleavage.

“I looked at Lily, smiled and said, ‘I think we got them right,’” said Williams, adding that “Lily’s own breasts were never exposed. She always wore the prosthetic breastplate.”

That was hardly the only prosthetic in use. James also donned a silicone forehead application, which covered her own hairline, to create Anderson’s slightly more pronounced profile and provide an ample canvas for her thinly tweezed brows. The actress also popped in a set of tailor-made prosthetic teeth which aided her in mirroring the Playboy centerfold’s signature smile and bewitching pout.

Stan, meanwhile, was fitted with an animatronic penis for the more wildly intimate scenes. He also wore pierced prosthetic nipples in order to “guarantee that audiences [could] see the impressions of Tommy’s nipple rings underneath every shirt,” Collins said.

Then there was a lot of ink to replicate. “His tattoos required about a month of prep as far as research was concerned,” added the veteran special makeup and effects artist, noting that he had to modify a few designs for legal purposes.

Actually implementing the designs was an arduous affair. “In order to get them just right on Sebastian, we did what’s called a tape transfer,” Collins said, explaining how he and his team covered Stan’s body in Saran wrap and plastic tape, sketched and measured each of Lee’s more than 30 tattoos, then uploaded the drawings to Photoshop to print on water-slide paper to make fake tattoos that could be applied to Stan’s skin. The daily process took a minimum of two hours.

“It’s time consuming but it helps us get the exact distance between his various body parts so that all the tattoos fit perfectly across his arms, torso, legs and back,” Collins explained.

And when it came to duplicating Lee and Anderson’s unique hairdos, Moe and his team spared no expense on customized wigs, specialized treatments and unique styling techniques.

Stan and James were both “fully vested” in physically transforming into Anderson and Lee for the series, according to the glam team. HULU

Initially he and James discussed dying her sandy brown locks to match Anderson’s platinum tresses, but the hair honcho ultimately opted for wigs to avoid damaging the actress’ natural mane.

“Wigs were much easier and time effective than dying Lily’s hair,” he said. “And David, Jason and I worked together to align the hairline with the prosthetic forehead and makeup to accurately re-create the way Pam’s hair framed her face.”

“We really made some movie magic there,” he chuckled.

“Creating hairstyles and looks for these characters that the world has never seen before was a really cool challenge,” said Moe. “We were able to transform these very recognizable actors into far less recognizable, ordinary people,” who played major roles in the destruction of Pam and Tommy, both publicly and privately.

And while the series is centered around the former pair’s X-rated flick, its storyline reveres Anderson and Lee — who divorced in 1998, following a violent domestic dispute — as innocent targets in a lawless moment.

“Our story isn’t about the sex tape,” explained Williams. “It’s about the stealing of a married couple’s intimate footage, exposing it to the world at a time when there were almost no rules on the internet and the damaging effect it had on their lives together.”

“Pam & Tommy” aims to shed light on the damage their pirated sex tape caused them and others. Getty Images, Erin Simkin/Hulu