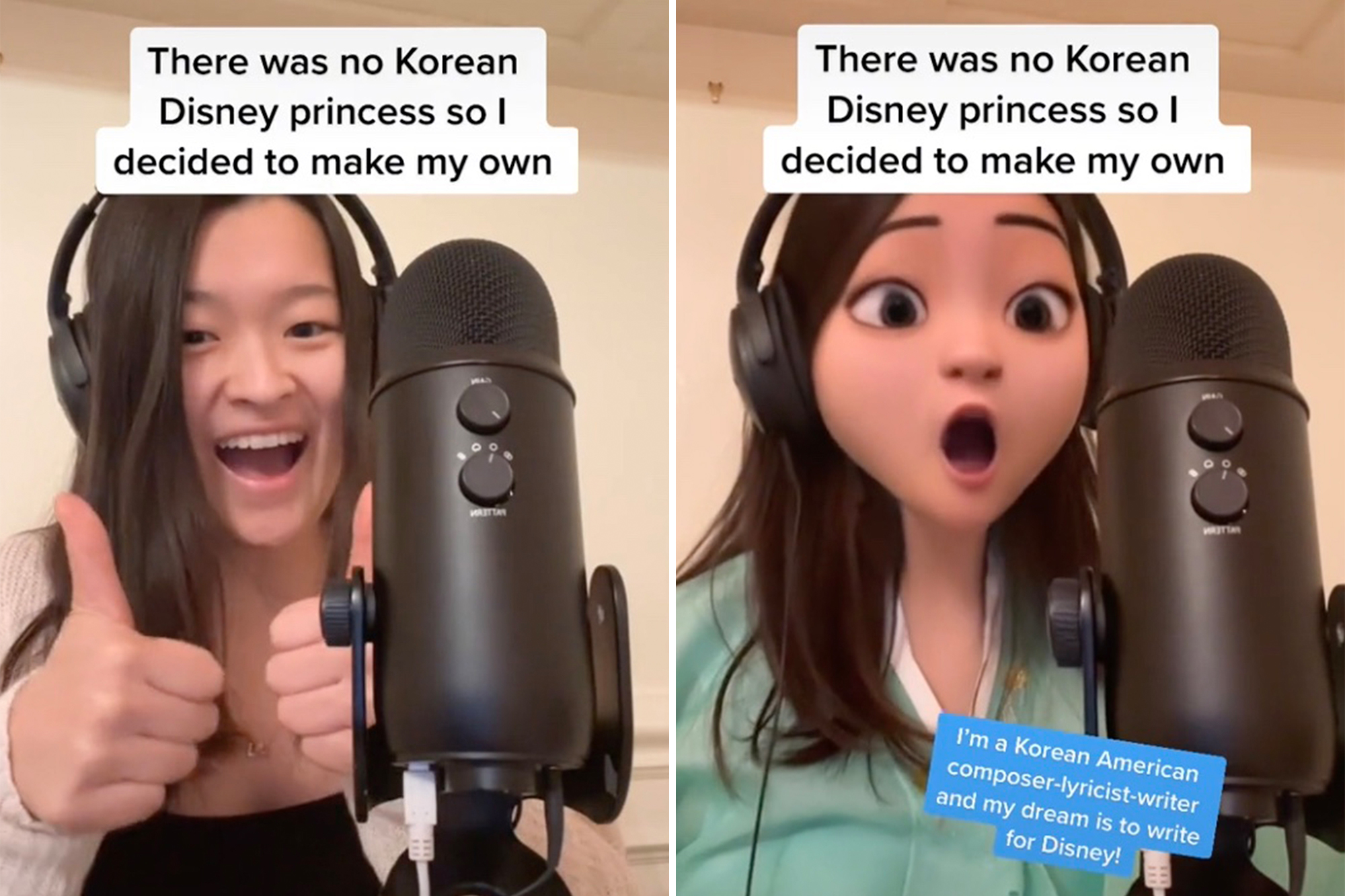 Chalk up a win for represent-Asian.

A Korean American Harvard University student saw that Disney didn’t have a Korean Disney princess — so she created one, along with an accompanying musical, for her senior thesis. A video announcing the pupil’s project has amassed nearly a million views on TikTok.

“I think stories are so important for kids,” Julia Riew, 22, told CNN of the fanfare surrounding her Disney-inspired creation “Shimcheong: A Folktale” which she’d reportedly made to introduce some diversity into film, and complete her senior thesis

The St. Louis native added, “As someone who, as a young person, never saw herself represented in media, or in film, TV or onstage — that was something I always longed for.”

“Now all of the fish in the sea can’t stop me,” Riew croons before using a TikTok filter to morph into the musical’s titular animated heroine. “All of the waves in the world can’t rock me. I’m on a mission and gee, just watch me go!”

“Shimcheong,” which is based on the Korean folktale “The Blind Man’s Daughter,” tells the story of a young girl who falls in the sea while trying to save her father and ends up in the treacherous “Dragon Kingdom” with seemingly no way out. As a result, Shimcheong is forced to try and escape her underwater prison and find her way home.

Along the way, the aquatic adventurer meets a prince and an evil Dragon Queen — both of whose signature songs Riew teased on TikTok. There are reportedly 16 tunes in total.

The aspiring playwright told KSDK that her reverse fish out of water tale was “inspired by my own personal journey in searching for belonging as a Korean American.”

“The story is really about her returning home and trying to reclaim this identity that she’s lost,” explained Riew, who began writing musicals at 15. “And that, for me, comes from a lot of my own personal story of growing up in Missouri and then going to Korea for the first time when I was 18 years old.”

Indeed, her “Ponyo”-esque tale is a parable for the life of Riew, who felt culturally adrift growing up in the predominantly black and white city of St. Louis, KSDK reported. This feeling didn’t improve when the young prodigy traveled to South Korea for the first time and discovered that she didn’t fit in there either.

“When I arrived, I think I was really surprised at how much of a foreigner I felt when I arrived in Korea,” lamented the playwright of the eye-opening pilgrimage.

In recent years, Riew has striven to get in touch with her Korean roots via language and culture classes, and through her music.

Riew has been composing musicals since she was 15.TikTok/@juliariew

Fortunately, it appears, that like the titular princess in “Shimcheong,” Riew has finally found a place where she belongs — within the international online community.

“(The craze) started off in America and then it started trending on Korean Twitter,” Riew said. “Even beyond producers reaching out, it’s when parents tell me, ‘I have a 5-year-old, or 3-year-old, or 9-year-old — I know that they would love to see this movie on-screen, and we’ve been listening to your songs.’ “

In addition, “Shimcheong” fans have been inundating Riew’s inbox with conceptual art of the Korean princess, which she’s shared in two parts on TikTok.

“I never imagined that something like TikTok … could bring me to a place where I feel such a warm sense of belonging,” mused the joint theater, dance, media and music major.

If that wasn’t exciting enough, Riew has also been receiving “a lot of messages and emails” from creatives, including film and theater producers.

“It definitely looks like the project is going to have a home somewhere in the future,” gushed the budding composer. “We’re not quite sure when, but a lot of conversations are being had, which is really exciting.”

Riew’s dream is to work for Disney, but for now, she’s just enjoying the ride.

“It’s probably been the craziest three weeks of my life, but it’s a really, really exciting time,” she said. “And honestly, I’m just really thankful.”

This isn’t the first time a TikTok project has garnered international acclaim.

Last month, the pre-filmed “Ratatouille: The TikTok Musical” boggled theater buffs’ minds after racking up more than $1 million in ticket sales during its three-day streaming run.