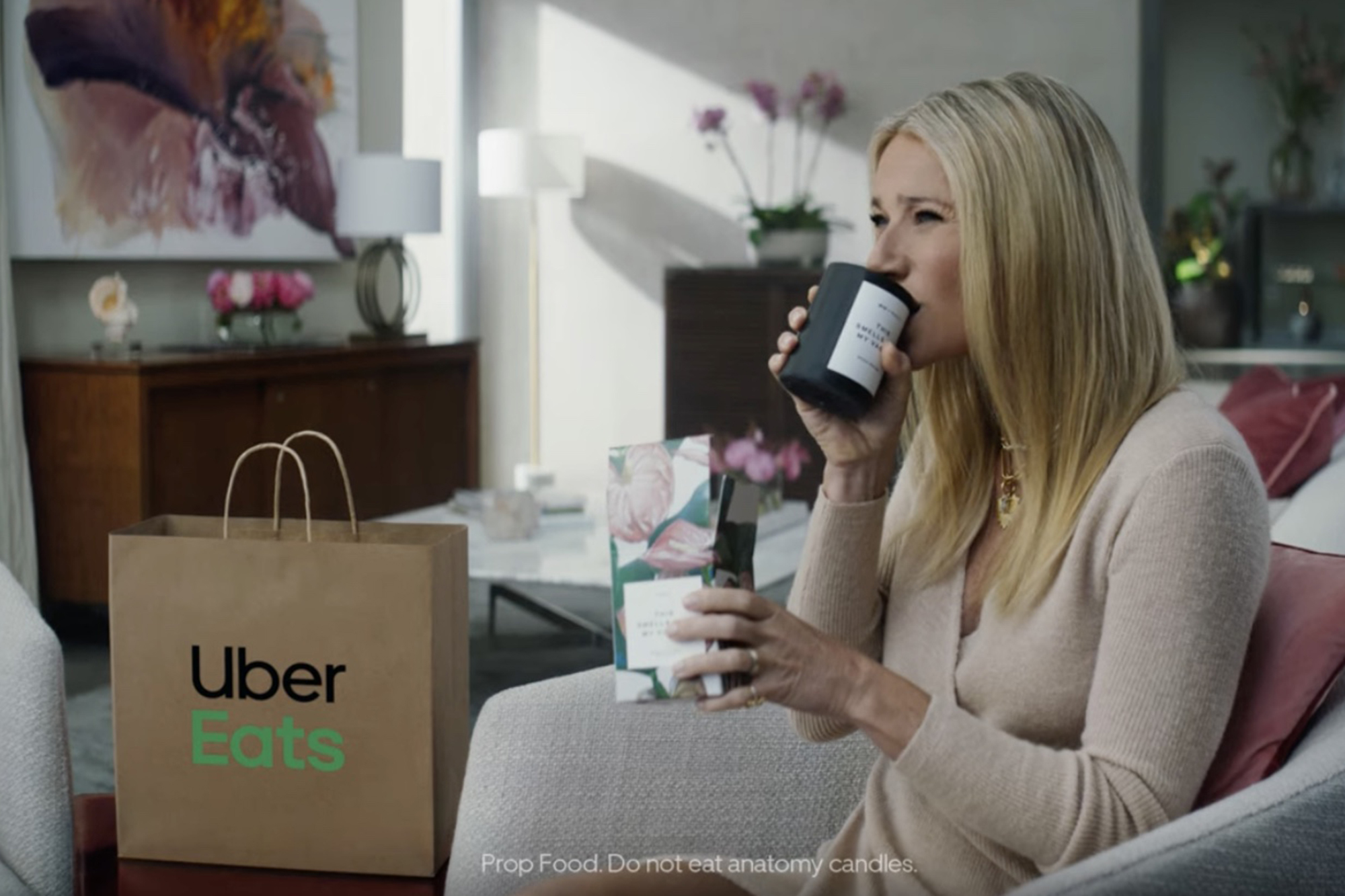 Goop creator Gwyneth Paltrow took a nibble out of her vagina-scented candle for an UberEats ad that will premiere on Sunday, Feb. 13, for the SuperBowl LVI.

The advertisement is an attempt to show consumers UberEats delivers more than just, well, good eats. As Paltrow learns the hard way, the delivery service also provides an array of household and personal items.

In the teaser, the 49-year-old Oscar-winning actress, she pulls out her own candle — “This Smells Like My Vagina” scented — and does more than just sniff.

She takes a bite.

“”This candle tastes funny,” she says while chewing and making a face that conveys her confusion. “Not bad, but funny.”

But Paltrow isn’t the only star savoring the abnormal snacks: Trevor Noah and Jennifer Coolidge are joining in the buffet. The star-studded commercial clips were teasers for the full-length ad which will premiere on-air during the SuperBowl.

In the clip of Coolidge, 60, she pulls a tube of lipstick from her UberEats bag — looking confused — saying, “Lipstick delivered with Uber Eats?”

Upon licking the dark-colored lipstick, she then takes a small bite.

“Oh, tastes like purple!” she exclaims. She follows up her lipstick amuse-bouche by chomping on a makeup brush.

Noah’s clip follows a similar fashion, pulling a stick of deodorant out of his own UberEats bag, whic is filled with paper towels, post-it notes and light bulbs.

After picking up the deodorant, he goes to put it under his arms and then stops suddenly, before chowing down.

The 37-year-old late night host then makes a face of disgust as he continues to slowly chew the unpleasant snack.

All three full Uber Eats spot are set to premiere on February 13th during  Super Bowl LVI  when the Cincinnati Bengals and Los Angeles Rams face off at the SoFi Stadium in Inglewood, California.

Farrah Fawcett’s red swimsuit poster to be sold as NFT
‘And Just Like That’ reveals plans for second season
We use cookies on our website to give you the most relevant experience by remembering your preferences and repeat visits. By clicking “Accept All”, you consent to the use of ALL the cookies. However, you may visit "Cookie Settings" to provide a controlled consent.
Cookie SettingsAccept All
Manage consent