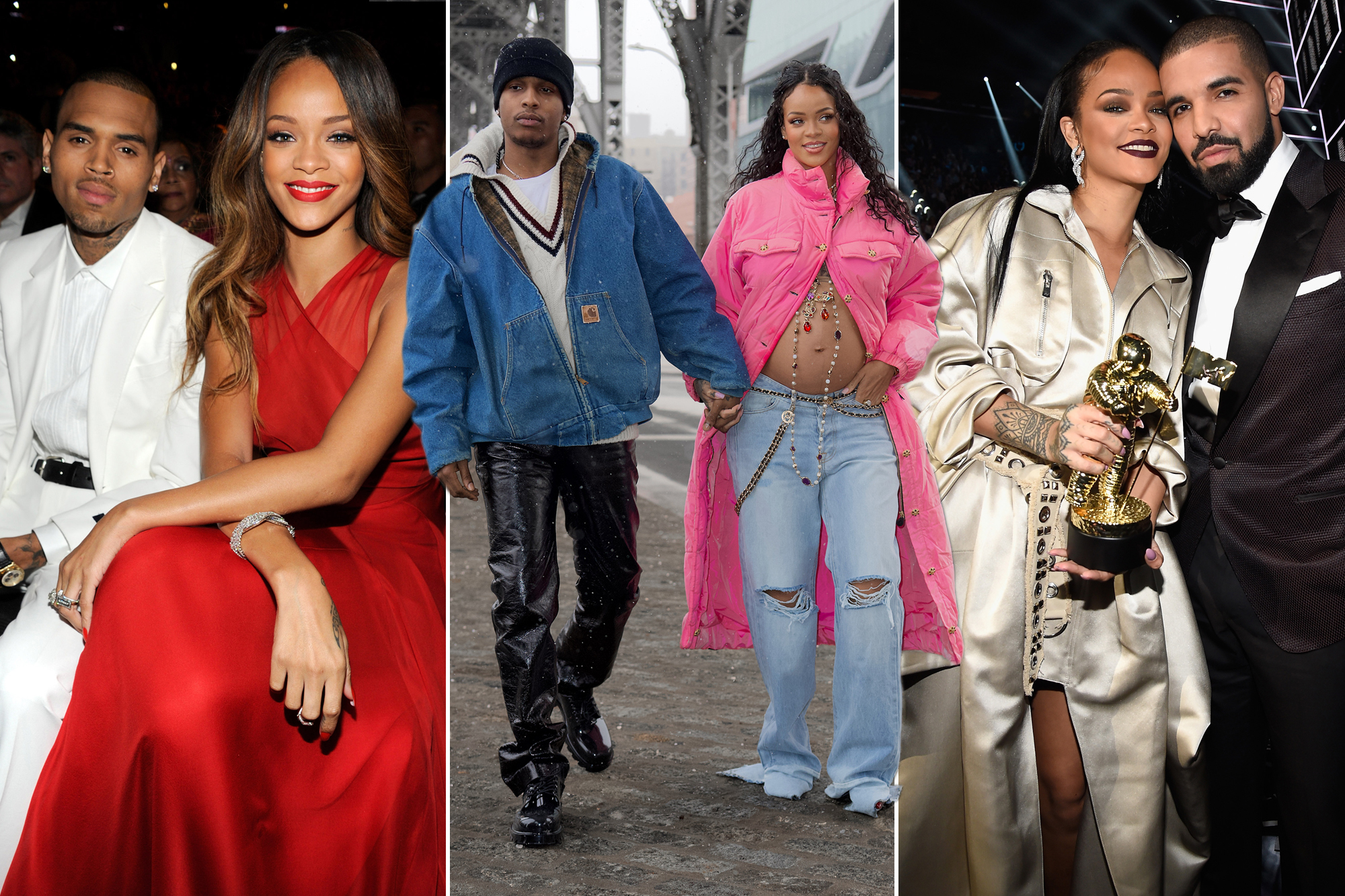 Rihanna has finally found the man who makes her feel like the only girl in the world: A$AP Rocky. The couple — who apparently have had love and babies on the brain recently — announced in January 2022 that they are expecting their first child.

However, prior to dating the rapper, the Savage X Fenty designer found love in a hopeless place with several men with whom things did not work out.

Here is a look back at Rihanna’s full dating history.

Rihanna and Chris Brown dated from 2007 to 2009. They then briefly rekindled their romance in 2013.WireImage

Chris Brown and Rihanna met when they were two young, up-and-coming entertainers in the music industry in 2005. However, they did not start dating until 2007.

In February 2009, the couple had a scandalous split when it was revealed that Brown had physically assaulted Rihanna on their way home from a pre-Grammys party. The “Look at Me Now” singer pleaded guilty to felony assault and completed probation in March 2015 in addition to community service and domestic violence counseling.

Brown and Rihanna briefly reunited in early 2013, with the “Love the Way You Lie” singer telling Rolling Stone at the time, “I decided it was more important for me to be happy. … Even if it’s a mistake, it’s my mistake.” By that April, however, they had broken up for good.

After her first split from Brown, Rihanna began dating professional baseball player Matt Kemp. The pair sparked dating rumors after being snapped together on New Year’s Eve in 2009 and then on a trip to Mexico in early 2010.

In May 2010, the former LA Dodgers outfielder gushed to Us Weekly, “Yeah! That’s my girl! She’s just a fun person. I love to be around her.”

However, they broke up by December 2010 due to the “Bitch Better Have My Money” singer’s busy schedule.

Rihanna and Karim Benzema reportedly dated off and on from 2015 to 2017.GC Images

Rihanna was then linked to another athlete: soccer star Karim Benzema. She reportedly met the Real Madrid player at a nightclub, and the pair were later photographed hanging out together at a restaurant in New York in June 2015.

In July of that year, an insider told E! News that Benzema was a good match for the “Diamonds” singer because he understood her hectic schedule and gave her “the space she needs.”

The couple broke up for good in 2017, and a source close to Benzema told the Spanish magazine Don Balon Rosa of the split, “Rihanna loved Karim, and with him, she had a lot of fun. But she told him she did not want to break his heart, and she confessed that she’ll always love Chris Brown. Rihanna said it was difficult to compete.”

It seems Benzema and Rihanna were not exclusive because in August 2015, the “Where Have You Been” singer was spotted vacationing with Formula 1 driver Lewis Hamilton in her native Barbados. A Page Six spy then saw the pair getting “cozy” at a 1 Oak nightclub in New York City, but their fling ended soon after.

Rihanna reportedly did not want the public to know about her rumored fling with Travis Scott.247PAPS.TV / Splash News

A month later, Rihanna was caught getting close to another famous face: Travis Scott. TMZ obtained footage of the “Work” singer and the “Sicko Mode” rapper making out at a New York Fashion Week party in September 2015.

They kept their fling under wraps, but when Scott was asked about the “Umbrella” singer for his Complex cover story later that year, he told the interviewer to not “do [me] like that, man.” Then, when asked to describe her in three words, he said “creative,” “inspiring” and “muse.”

Rihanna and Leo Dicaprio, seen here at Coachella in 2016, never made their rumored romance official.Jesse Grant

In January 2016, Page Six reported that Rihanna and Leonardo Dicaprio were spotted kissing in a Paris nightclub — although sources close to the stars insisted at the time that they were “just friends.”

The A-listers then fueled romance rumors even more when they were seen hanging out together at Coachella that April.

Aside from dating, Rihanna and Drake also collaborated on musical projects such as the song “Work.”WireImage

Also in 2016, Rihanna and Drake sparked dating rumors of their own when they made appearances at each other’s shows.

The “Hotline Bling” rapper confirmed their romance at the MTV Video Music Awards that August when he said during a touching speech for Rihanna’s Video Vanguard honor that she was “someone I’ve been in love with since I was 22.”

Sources then told Page Six that the pair, who have collaborated on songs such as “Work” and “Take Care,” arrived at a VMA afterparty “looking very much like a couple and very in love.”

Less than two months later, a source told E! News that Rihanna and Drake had split over their schedules but were “still in each other’s lives” as close friends.

However, by June 2018, Rihanna told Vogue that she and Drake no longer had a friendship but were “not enemies either.”

In June 2017, Rihanna was spotted making out with Saudi businessman Hassan Jameel while on vacation in Spain. A source said at the time, “This relationship is the real deal. Rihanna has told friends she’s in love with him and seems completely smitten. They’ve been spending a lot of time together away from prying eyes and are really serious. They’re really enjoying each other’s company.”

Things appeared to be taking a serious turn when Jameel was seen out to dinner with Rihanna and her mom. Their relationship was kept mostly out of the spotlight.

In January 2020, the couple called it quits after nearly three years together. A source told People, “Their lives were too different, and it was hard to maintain a relationship.”

Rihanna announced her pregnancy with a photo shoot in A$AP Rocky’s native Harlem.DIGGZY/SHUTTERSTOCK

Rihanna began dating A$AP Rocky almost immediately after her breakup from Jameel, but a source told the Sun at the time that the billionaire was “reluctant to put a label on it as it’s so soon after Hassan.”

The pair appeared to grow closer by spending a lot of time together in New York City before officially going public in November 2020.

By May 2021, Rocky opened up about his relationship for the first time himself, telling GQ that Rihanna was the “love of [his] life” and “the one.”

The couple announced Rihanna’s pregnancy in January 2022 with a snowy photo shoot in the “F–kin’ Problems” rapper’s native Harlem.

Bethenny Frankel ‘had access’ to ‘RHONY’ producers
Meredith Marks responds to Lisa Barlow’s ‘RHOSLC’ hot mic ‘tirade’
We use cookies on our website to give you the most relevant experience by remembering your preferences and repeat visits. By clicking “Accept All”, you consent to the use of ALL the cookies. However, you may visit "Cookie Settings" to provide a controlled consent.
Cookie SettingsAccept All
Manage consent