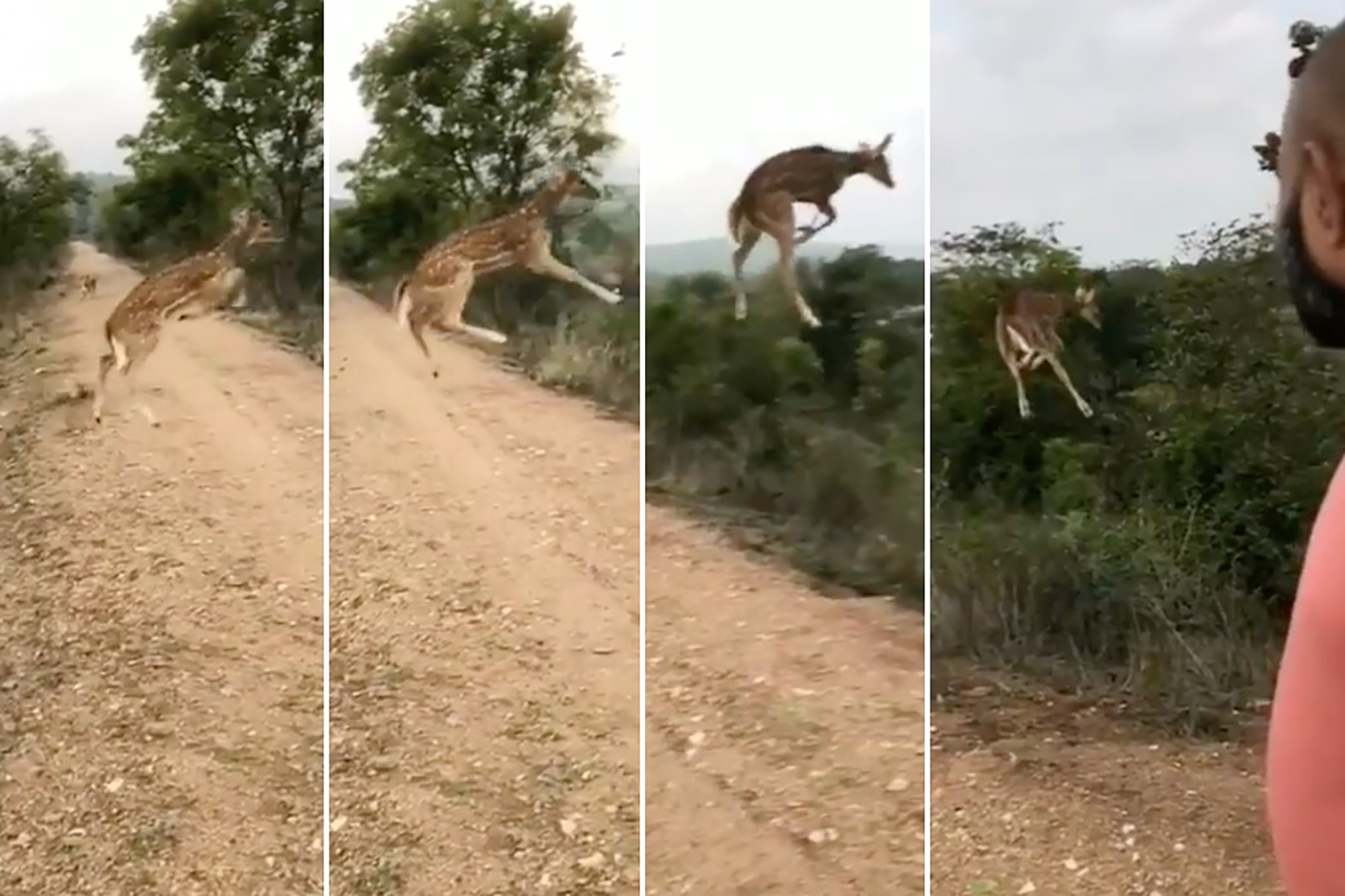 A deer put Michael Jordan to shame after it was filmed leaping to an insane height while crossing a road in India. A jaw-dropping video of the gravity-defying feat boasted over 85,000 views on Twitter as of Monday morning.

“And the gold medal for long & high jump goes to…..” reads the caption to the high-flying footage, which was shared Friday to the Twitter account of India-based environmental NGO WildLense Eco Foundation.

In the exhilarating slow-motion clip, a spotted deer can be seen emerging from a river and jumping effortlessly across a dirt path. During the incredible soaring leap, the ungulate glides through the air at approximately the height of a person as if suspended by wires in a Hong Kong kung fu flick.

This deer is going viral for flipping a big “buck you” to physics after it was filmed leaping to an insane height while crossing a road in India. Twitter/WildLense Eco Foundation

The clip concludes with this badass Bambi sailing into the bushes on the other side of the path and running off while bystanders look on in awe.

Although the clip’s poster doesn’t actually disclose what type of deer is featured in the footage, the axis deer — a species native to India — can reportedly leap over fences when threatened, Hunting Heart reported.

“Wow, never seen such a long jump from anybody but this one is literally flying,” commented one awestruck gawker of the acrobatic animal’s awe-inspiring air time. Another wrote, “Yes the gold medal goes to daring ‘Deer’ what a jump! I can’t believe this.”

One fan compared the scene to something out of an “action movie.”

This isn’t the first time an animal has showcased seemingly species-defying athleticism. Two years ago, a javelina proved that pigs can “fly” after it was filmed galloping down an Arizona street at a ludicrous speed.

Betty White’s co-star reveals ‘naughty jokes’ on 100th birthday
Denzel Washington helped ‘Creed III’
We use cookies on our website to give you the most relevant experience by remembering your preferences and repeat visits. By clicking “Accept All”, you consent to the use of ALL the cookies. However, you may visit "Cookie Settings" to provide a controlled consent.
Cookie SettingsAccept All
Manage consent