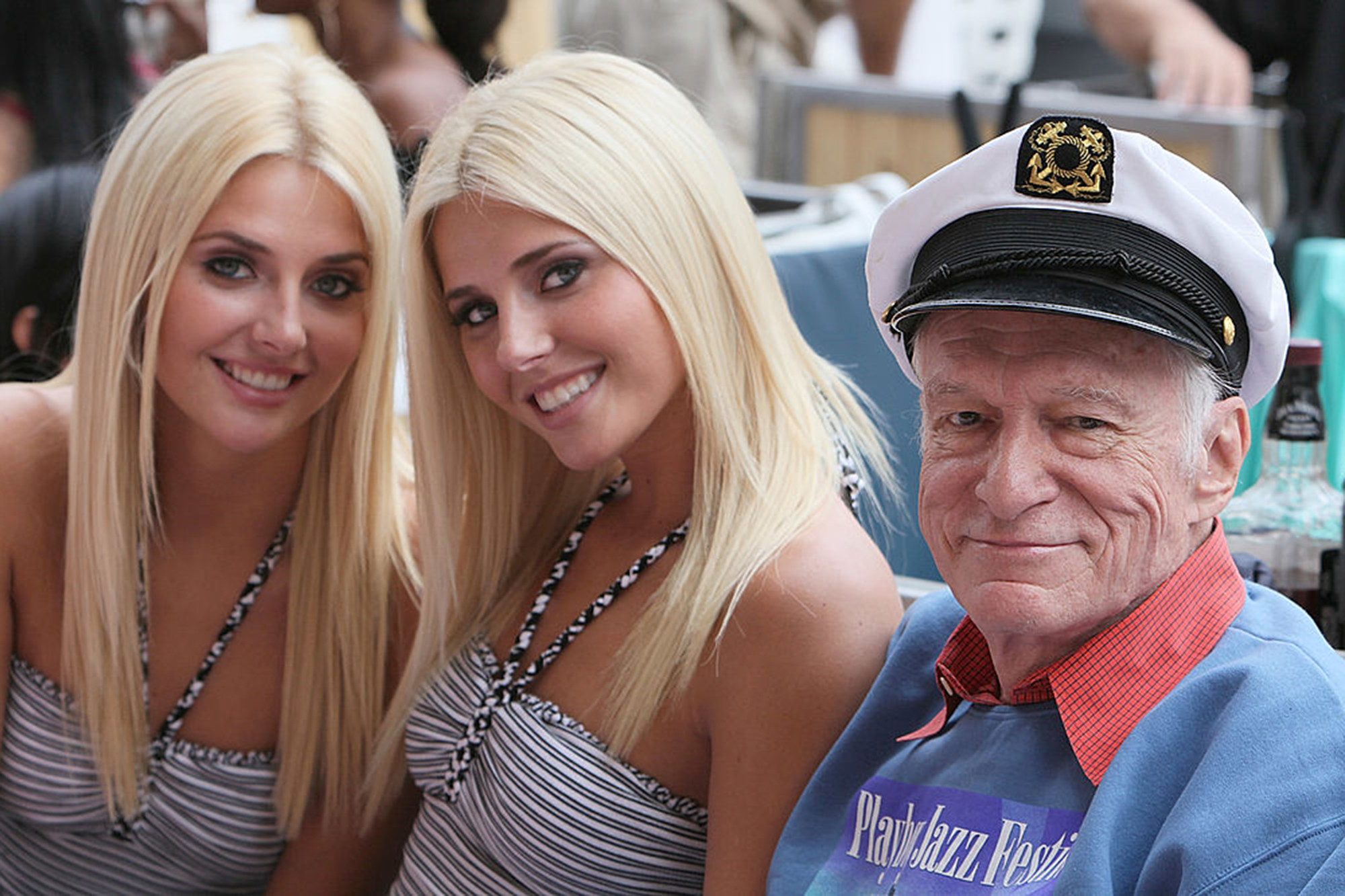 The devil made her do it.

A 2009 Playboy Playmate, Karissa Shannon, claims she aborted Hugh Hefner’s “devil child” at age 19 after the late Playboy baron reportedly plied her with alcohol, forced her into unprotected group sex and impregnated her when he was in his 80s.

And the model told The Post that she “pities” the fact that Hef is now dead because he “got away” with upending the lives of so many vulnerable women — including her own.

Karissa Shannon (center, with sister Kristina) says she felt like she was carrying the “devil’s child” after she was unexpectedly impregnated by Hugh Hefner at age 19. Getty Images

“It was like the devil was inside of me,” Shannon, 32, told the Mirror of Hef’s spawn. “I didn’t want anyone to know I was carrying an 83-year-old man’s child.”

The platinum pinup, who regularly appeared on Hefner’s E! reality series “The Girls Next Door” alongside her twin sister, Kristina, allegedly learned that the smut magazine magnate had gotten her pregnant when she took a blood test before undergoing breast augmentation surgery in 2009.

Karissa Shannon said she felt like she was carrying the “devil’s child” after she was unexpectedly impregnated, allegedly by Hefner. WireImage

“I was disgusted with my body and felt like there was an alien inside my stomach,” she told the Mirror, insisting her unborn child had indeed been fathered by Hefner.

“I wasn’t having sex with anyone else, so it only could have been his baby,” Shannon continued. “I just wanted to get rid of it as soon as possible. I didn’t want Hef to find out, and he never did.”

Her charge against Hefner comes alongside a deluge of abuse and sexual misconduct allegations made in the damning new A&E documentary “Secrets of Playboy.” Throughout the series, Playmates, employees and members of Hef’s harem finger the fallen erotica icon for allegedly exploiting unsuspecting women behind the once-impermeable walls of his Playboy Mansion.

Karissa claimed she ultimately terminated the pregnancy with the help of Kristina, who supposedly orchestrated a scheme that allowed them to briefly escape Hefner’s watchful eye.

“I found a clinic in LA. I got Hef’s security to drop us at the mall, pretending we were going shopping, then called my friend to pick us up,” said Kristina. “We were able to keep it secret.”

The twins claim Hefner plied them with drugs and alcohol before coercing them into unprotected group sex on their 19th birthday. Getty Images

The identical centerfolds — who left a trailer park in Florida to move into the Los Angeles Mansion at age 18 after Playboy scouts discovered their glam photos — claimed Hef, with the help of fellow “Girl Next Door” Kendra Wilkinson, now 36, coerced them into an unprotected, drug- and alcohol-fueled ménage à trois.

“On our 19th birthday, he took us to a club. He bought us alcohol even though the US age [minimum] is 21,” Kristina alleged to the Mirror. “When we got back [to the Playboy Mansion], Kendra was like, ‘Do you girls want to smoke some weed in Hef’s room?’ But when we got into his room, Kendra left. We got really nervous.”

The towheaded twins claimed that Hef then offered them a “big pill,” which they likened to medicine “a horse would take.”

Karissa and Kristina said the tablet was a Quaalude — known in Hefner’s circle as a “leg spreader,” which he’s been accused of using in order to manipulate women into having nonconsensual sex.

“He told us the drugs would help with our anxiety,” said Karissa. “We smoked some pot. We felt frozen at first but after a while the pill made us loose and fuzzy.”

She remembers the then-octogenarian, who she says forced her and Kristina to call him “Papa,” cradling them as the drugs took effect. She also recalls Hef calling them “my babies” repeatedly while they lay on either side of him.

Karissa and Kristina allege that Hef would force “six to seven” women into his bed around midnight each night. WireImage

And when Hefner died of sepsis at age 91 in 2017, the buxom blondes breathed a sigh of relief.

“When Hef died, part of us did feel sad, but another part was like, ‘OK, good, no more girls are going to be groomed and ruined like we were,’ ” said Kristina. She and Karissa claim Hefner would force “six to seven” women into his bed each night.

“I thought Playboy was one big family,” Kristina added. “Now I can see it was a cult.”

The twins recall being relieved at the news of Hefner’s death. FilmMagic

However, Karissa and Kristina told The Post that they are not “glad” Hefner is dead. Instead, they’re comforted in the knowledge that the world is finally learning that the Playboy emperor was “not the man everybody thought he was,” and that his once-celebrated corporation was truly a “dangerous cult.”

The sisters claimed they’ve suffered PTSD and depression as a result of the two years they lived with Hefner in his mansion. And they’re allegedly planning to sue Playboy for emotional distress and trauma.

Karissa and Kristina are reportedly planning to sue Playboy and claim they’ve suffered emotional distress as a result of their time under Hefner’s employ. WireImage

“We were Playmates, employed, and everything happened at the mansion, so we want to go after them,” Kristina explained to the Mirror of their potential lawsuit. “We are speaking out because we want people to know who he truly was and what was going on behind closed doors.”