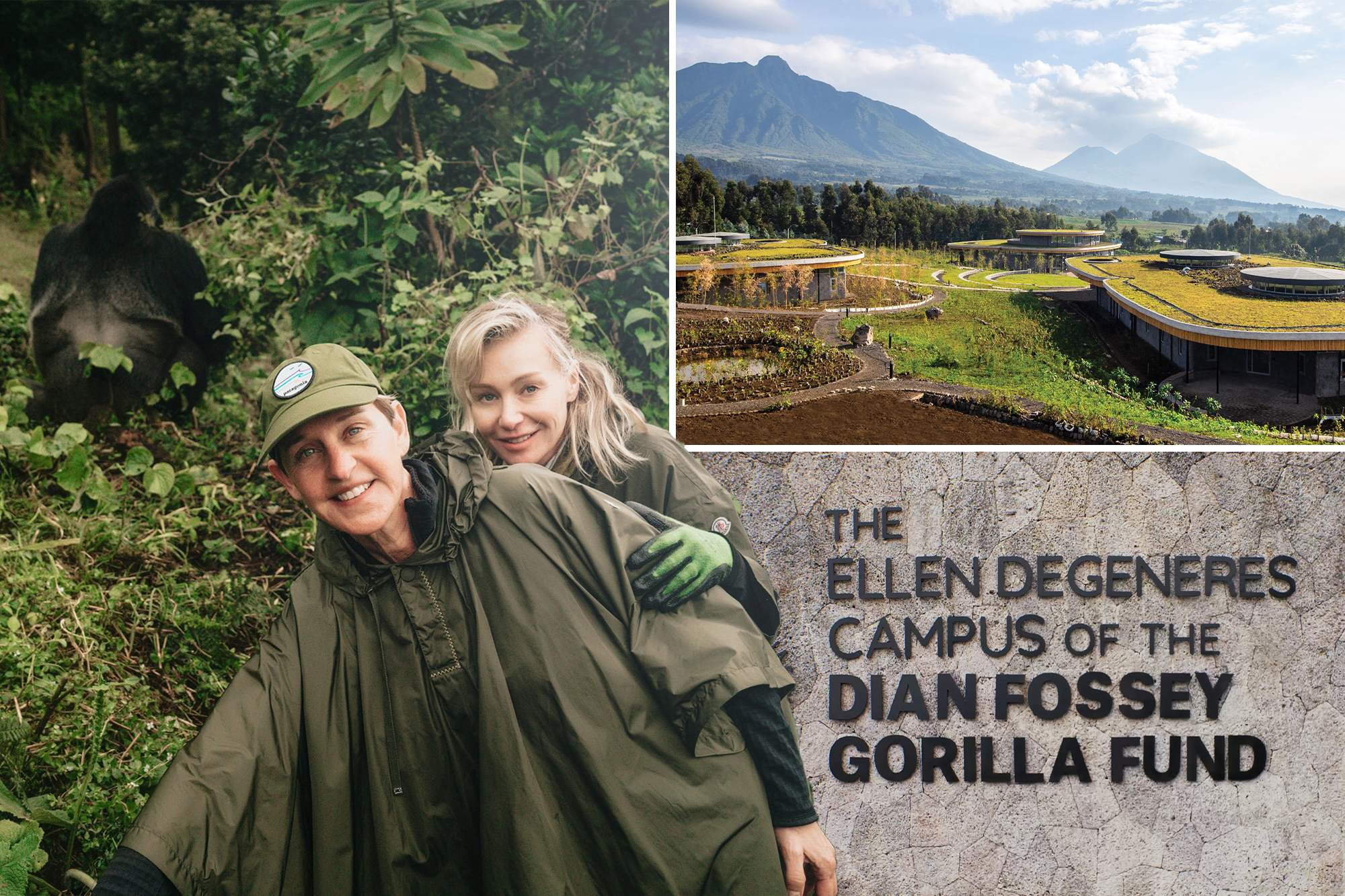 Here’s news to go ape over.

Ellen DeGeneres’ long-awaited dream has become a reality with the public opening of her gorilla campus in Rwanda.

Located outside Volcanoes National Park, the idea first came to fruition four years ago, when her wife, Portia de Rossi, gifted the daytime host with a gorilla conservation center to celebrate her 60th birthday.

The spread is named the Ellen DeGeneres Campus of the Dian Fossey Gorilla Fund after the late American primatologist and conservationist.

“Dian Fossey has always been a hero of mine, and so it’s been the honor of a lifetime to support this project,” DeGeneres said in a press release sent to The Post.

“To see my name alongside hers on the walls of this beautiful campus, and to know I’m doing my part to protect endangered gorillas and continue Dian’s legacy, is simply amazing.”

The multi-acre, eco-friendly spread is designed to provide the Fossey Fund with a space that helps amplify its mission of protecting and studying gorillas. The Dian Fossey Gorilla Fund

Initially founded by Fossey, whose life and ultimately death were portrayed in the movie “Gorillas in the Mist,” the Dian Fossey Gorilla Fund is considered the world’s largest and longest-running organization dedicated entirely to gorilla conservation, according to the press release.

“From the outset, the mission of this project has focused on creating a space to engage the many stakeholders in conservation — students, scientists, tourists, conservation partners, community members—to advance our collective goal of saving gorillas and more broadly, the planet,” said Dr. Tara Stoinski, the Fossey Fund’s president and chief scientific officer. “It is our hope that people who visit the Ellen DeGeneres Campus will leave inspired to make a difference, just as Dian Fossey did.“

The Ellen DeGeneres Campus opened to visitors for the first time on Tuesday after years of construction and is available for private tours.

“The Ellen Campus represents a huge expansion of our teaching and laboratory spaces, enabling us to not just increase but transform our programs to study gorillas and their critical forest habitat and bring educational opportunities to early career African scientists and members of the local community,” said Felix Ndagijimana, the Fossey Fund’s director of Rwanda programs.

The fund acquired approximately 15 acres of land for the projects and consists of eco-friendly facilities including housing for visiting students and researchers.

Support from numerous donors contributed to the project, including Leonardo DiCaprio, who named a theater for his mother, Irmelin, and a computer lab for his father, George.Dian Fossey Gorilla Fund

Support from numerous donors contributed to the project, including Leonardo DiCaprio, who named a theater for his mother, Irmelin, and a computer lab for his father, George.

Fossey feared that mountain gorillas would be extinct by the year 2000. But the population in the region grew from a low of 250 gorillas in the 1980s to more than 600 today, according to the press release, which attributed the “rare conservation success story” to the work of Fossey and other staff members.