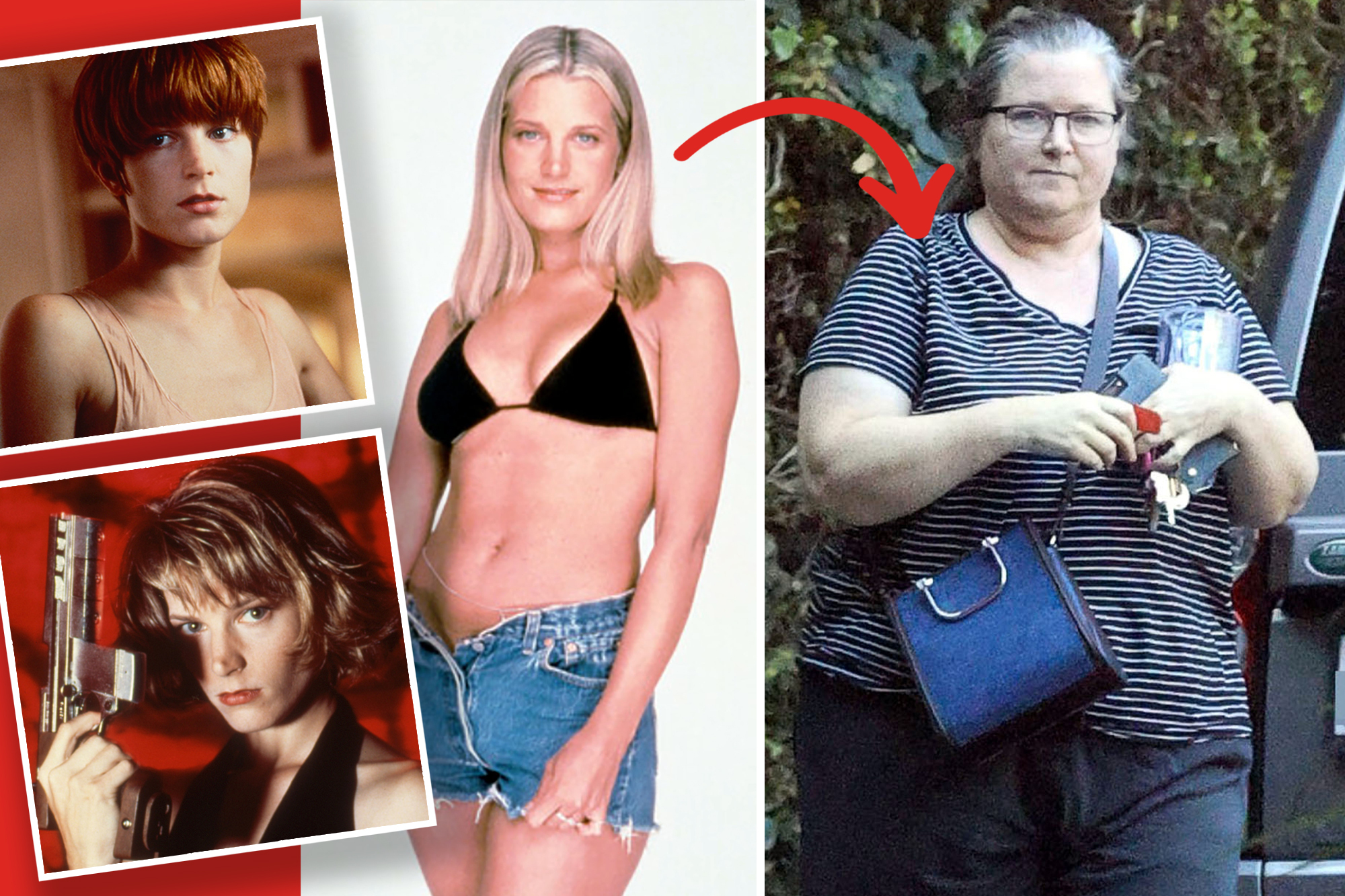 Bridget Fonda doesn’t care about keeping up with the Kardashians — or even her aunt Jane Fonda — judging from the first public photos of her in 12 years.

These photos, seen today on her 58th birthday, show the once svelte and glamorous star, who retired from acting in 2002, looking very different from her red carpet heyday.

Fonda was wearing a black-and-white-striped jersey top and black sweatpants, her face makeup free, as she was spotted driving around Los Angeles.

Fonda is part of the famous Fonda acting dynasty. Her grandfather is the late actor Henry Fonda, her father is actor Peter Fonda and her aunt is actress Jane Fonda, 84. Peter Fonda died at 79 in 2019.

One of the last times Fonda was seen in public was at the “Inglourious Basterds” premiere with her husband Danny Elfman in 2009.WireImage

Fonda is unrecognizable as she’s spotted publicly for the first time in over 12 years. SplashNews.com

Fonda reportedly left acting after a bad car accident in 2003, in which she fractured her back, and also because she wanted to focus on raising her son, Oliver, 17, with her husband of 19 years, composer and former Oingo Boingo frontman Danny Elfman, 68. Elfman has two daughters, Lola and Mali, from his marriage to Geri Eisenmenger.

Elfman is still active in the entertainment industry and posts frequently on his Instagram account with 158,000 followers, which rarely showcases his family and instead focuses on his work as a musician and the family dog, Yuki. Two days ago, Elfman posted that he will be performing at the Coachella music festival this year,

As she turns 58, the daughter of Peter Fonda is seen running errands near her California home.http://www.SplashNews.com

She made her movie debut in her dad’s classic film, “Easy Rider,” in 1969 when she was only five years old. She has a younger brother, Justin Fonda, 55, who works both behind and in front of the camera in film and TV.

One of the last times she was seen at a Hollywood event was in 2009 when she attended the LA premiere of Quentin Tarantino’s World War II film, “Inglourious Basterds” with Elfman.

“I wonder what kind of satisfaction I would have with where I am now if I wasn’t part of a family that has done such phenomenal work,” Fonda told Movieline for a cover story in 1993. “I wonder what it would feel like to know that you’ve made it completely under your own steam. I sometimes wonder if I would be more at peace if I could know I made it by myself, instead of always wondering how many times my name got me in the door.”

Fonda was spotted driving her 17-year-old son Oliver in her luxury Land Rover, with her dark hair scraped back and wearing glasses. SplashNews.com

Fonda and Elfman live in LA’s upscale Encino suburb, which is home to many celebrities including Nick Jonas and Priyanka Chopra, Gwen Stefani and Selena Gomez. SplashNews.com

Fonda, a 1986 graduate of NYU, also studied at the Lee Strasberg Theater Institute.

In February 2003, she miraculously survived a rollover car crash on the Pacific Coast Highway, walking away only because she wore her seat belt, authorities said at the time. Fonda had been headed south on the highway in Malibu when she lost control of her 2001 Jaguar — which flipped over an embankment and tumbled downhill.

Later it was reported that the injury she suffered to her back was more serious than originally thought.

Bridget has apparently stayed close to her aunt Jane over the years. Photos of a Christmas party hosted by Bridget and her husband in 2009 are displayed on Jane Fonda’s website.

“Bridget and Danny give an annual Christmas party, each one with a theme,” Jane Fonda wrote. “This year was Cuba and there was a fantastic full Cuban band. Many people wore costumes. We did a minimal job on costumes but had fun anyway. Vanessa (Fonda’s daughter) and my grandchildren just got in from Atlanta in time for the party and to see their cousin Oliver.”

Fonda and Matt Dillon in “Singles” from 1992.Warner Bros.

Prior to meeting and marrying Elfman, Fonda was in a relationship with Eric Stoltz for about seven years until the two broke up around 1998. She later dated musician Dwight Yoakam from 1999 to April 2002.

She and Elfman live with their son in two neighboring properties worth about $8 million located in Encino in the San Fernando Valley just outside Los Angeles. They bought the adjoining properties last year after selling their estate in Hancock Park. They also have a ranch in Santa Barbara.

As she turns 58, the daughter of Peter Fonda is seen walking the family dog, Yuki, in LA.SplashNews.com

While she seems to have found personal happiness since her marriage to Elfman, Fonda did not always come across as totally confident in early interviews. In 1993, she begged a journalist not to write that she was smoking. When he asked her why, she said she was worried about her grandmother reading that she smoked.

She also said, “I smoke when I’m nervous. I get nervous about not being a good interview.”

Representatives for Fonda and Elfman could not be reached by The Post Thursday.

Fonda with past boyfriends Dwight Yoakam and Eric Stoltz. She reportedly left acting in 2002 to look after her son, Oliver, with husband Danny Elfman.WireImage (2)

Virginia man crashes car into Taylor Swift’s Tribeca building: cops
Bob Saget’s daughter Lara breaks silence on his death
We use cookies on our website to give you the most relevant experience by remembering your preferences and repeat visits. By clicking “Accept All”, you consent to the use of ALL the cookies. However, you may visit "Cookie Settings" to provide a controlled consent.
Cookie SettingsAccept All
Manage consent